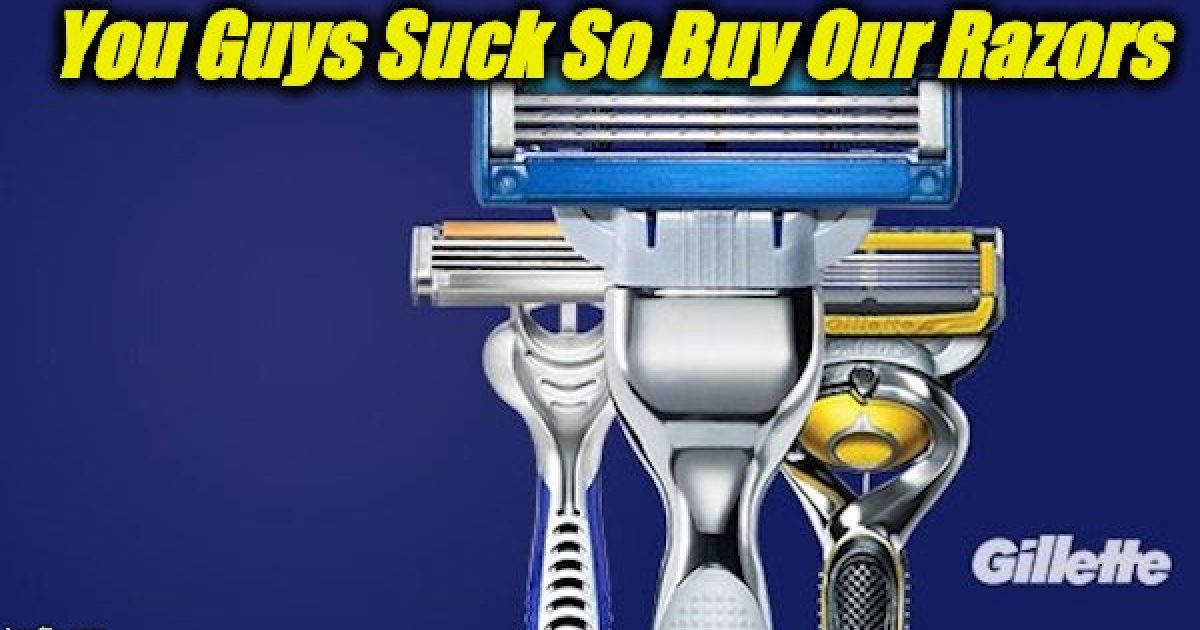 If I learned anything in my thirty years in the advertising business, it was never put down the people you want to purchase your products. Gillette has caused much consternation because their latest campaign not only breaks that rule, it blows it up. Gillette razors have just attacked all men, accusing them of having “toxic masculinity.”

The video spot features footage of men being violent, ignorant, jerks interspaced with reports from the #MeToo movement.

The video advertisement features footage of men being violent, ignorant, jerks interspaced with reports from the (increasingly fascist) #MeToo movement.

“‘Boys will be boys’? Isn’t it time we stopped excusing bad behavior? Re-think and take action by joining us at TheBestMenCanBe.org,” the razor company tweeted on Monday.

“We Believe: The Best Men Can Be,” the ad meekly states.

I say, “Ad guys will be ad guys And isn’t it time they stopped excusing really asinine commercials.”

Gillette razors have just attacked all men, accusing them of having “toxic masculinity.”

“Boys will be boys”? Isn’t it time we stopped excusing bad behavior? Re-think and take action by joining us at https://t.co/giHuGDEvlT. #TheBestMenCanBe pic.twitter.com/hhBL1XjFVo

Is Gillette’s message, “you suck so much use our razor to kill yourself”? What does any of that have to do with shaving? Most male viewers might watch that commercial and think, “well I don’t do that kind of stuff, so this brand isn’t for me.”

The new ad from the razor brand owned by Proctor & Gamble encourages men to re-examine their lives and, I guess, become more like women, or something. Granted most P&G products target women so they may not be used to targeting men, but this ad is crazy. The ad is essentially a two-minute demonization of how P&G imagines men act.

In a comment to the Wall Street Journal, Pankaj Bhalla, Gillette’s brand director, said that the advertisement is a meditation on the changes that men must make in America. “This is an important conversation happening, and as a company that encourages men to be their best, we feel compelled to both address it and take action of our own,” Bhalla said. “We are taking a realistic look at what’s happening today, and aiming to inspire change by acknowledging that the old saying ‘Boys Will Be Boys’ is not an excuse. We want to hold ourselves to a higher standard, and hope all the men we serve will come along on that journey to find our ‘best’ together.”

The ad did not sit well with thousands of customers or potential customers who lambasted the company on its tweet for the new ad.

“I’ve been using your products for over 30 years, just stopped today. Make razors stay out of social justice. Get woke, go broke!” one wrote.

Another said, “Thanks for showing me what razors never again to buy. Gillette is off my list.”

“Done with you. There is nothing TOXIC about being a MAN. But your leftist garbage is toxic,” still another wrote.

One Twitter user even attacked from the left and slammed P&G for it failed liberal record: “Horrendous and disgusting global corporation with one of the shittiest records for animal and workers’ rights gets so haughty that they tank their own business by insulting their customers. At least Gerald Ratner did it with panache and in person.”