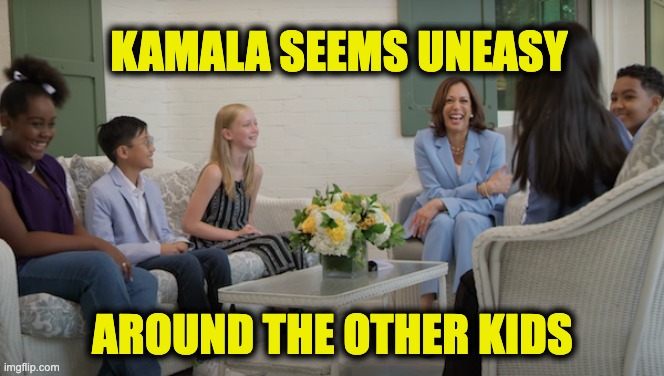 There is a brand new original YouTube series, “Get Curious with Vice President Harris.’ Judging by the latest episode, If cackling Kamala had any sense at all, heads would roll after this embarrassing scene. But we did say ‘if,’ didn’t we? No heads will roll for this, no matter how richly deserved the firing of her communication team might be.  get curious VP Harris

Perhaps her communications team is trying to win VP Harris an Emmy or an Oscar now that the competition (Gov. Cuomo), is out of office, But this video won’t do it.

The video in question has Veep Kamala Harris meeting with several kids and talking about outer space. Clearly, talking to children is not something she has a lot of experience with because she seems unbelievably awkward talking to them. Her body language, folded arms, etc., demonstrate that she’s uncomfortable.

Perhaps her uncomfortableness around kids is why the border czar/VP refuses to visit our southern border. Maybe Kamala feels incredibly uncomfortable near unaccompanied minors.

The above was just a clip. If you’re feeling masochistic, you can watch the entire hellish 9.5 minutes (but I wouldn’t watch on a full stomach).

It’s almost enough to feel bad for the kids who had to sit through that cringe-fest…Almost.

One can’t feel bad once you realize those kids were paid to be there. That’s right, the children in her wooden TV appearance were a cast of paid actors. And, ironically, it wasn’t even an American company. It was a Canadian company called — wait for it — Sinking Ship Entertainment— a perfect name for a company dealing with the Biden administration. But didn’t dementia Joe say something about using American companies when he took office?

Child actors Derrick Brooks II, Emily Kim Zhoriel Tapo, and Sydney Schmooke rounded out the cast for the show, which was filmed in August for its release during world space week.

The video, which was produced by a foreign entity, Canada’s Sinking Ship Entertainment, shows the group meeting Kimbrough from the International Space Station via Zoom. He remotely leads the children on a scavenger hunt to buy tools to build a telescope. The group then meets with the Harris, which Bernardino thought was the highlight of his visit to the Naval Observatory.

It’s good to know the cackling Veep has done such an excellent job of buttoning up that border that she can take some time out with kids paid to be her adoring fans.

The first installment of Vice President Kamala Harris’s YouTube Originals space series featured child actors who auditioned for their roles in the project.

Trevor Bernardino, a 13-year-old actor from Carmel, California, and one of five teenagers featured in the video, was asked to submit a monologue discussing something he is passionate about and three questions for a world leader, according to an interview with KSBW TV. Trevor then interviewed with the production director.

“And then after that, like a week later, my agent called me, and he’s like, ‘Hey Trevor, you booked it,’” Trevor said. He didn’t learn until much later that he would be meeting with Harris, who was appointed to lead the National Space Council earlier this year.

…“All five of them are actors,” Bernardino’s father, Carlo, told the Washington Examiner in an interview Monday.

“He’s a child actor — he’s been trying to do this type of thing for a while. And so he has a manager and an agent in LA and they send him castings,” Bernardino said. “This was a casting call, a very specific one where he had to write essentially a monologue about what he’s really passionate about and he wrote a monologue about the environment.

It’s a safe bet that she’s so corrupt by now that there isn’t a single authentic thought left in Kamala’s head. But some may say it still beats the POTUS.  Originally the series was going to feature Biden, and instead of being called “Get Curious with Vice President Harris,” it was going to be called. “Remembering Your Name And Where You Are with President Biden.”