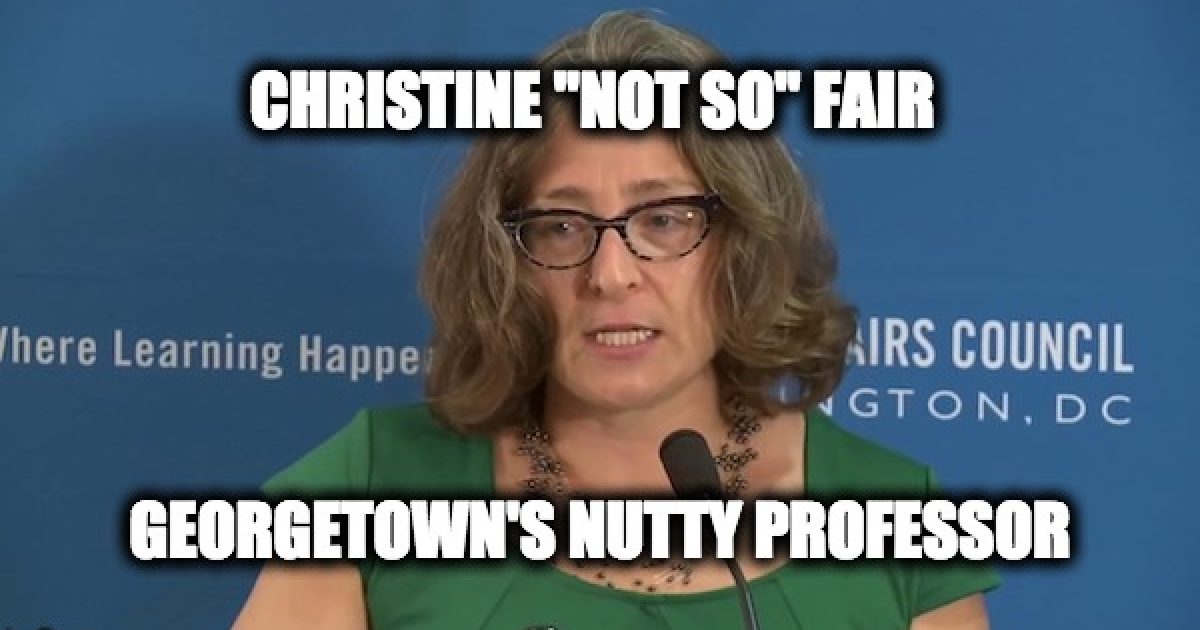 The Georgetown University professor Christine Fair who previously tweeted profanity-laced comments about Republicans, and went on a month-long rant against a Muslim professor who voted for Trump, now says that white GOP senators in Thursday’s Kavanaugh hearing “deserve miserable deaths.”

As reported by the Daily Caller, in December 2016 Christine ‘Not so” Fair went on a 31-day screed against former Georgetown colleague Asra Q. Nomani, because the latter wrote an op-ed in The Washington Post Nov. 10 explaining why she, as a Muslim woman and liberal voted for Trump. Crazy Christine went wild in Twitter and Facebook. calling her former colleague a “wretch,” “clueless dolt,” and a fame-monger.” 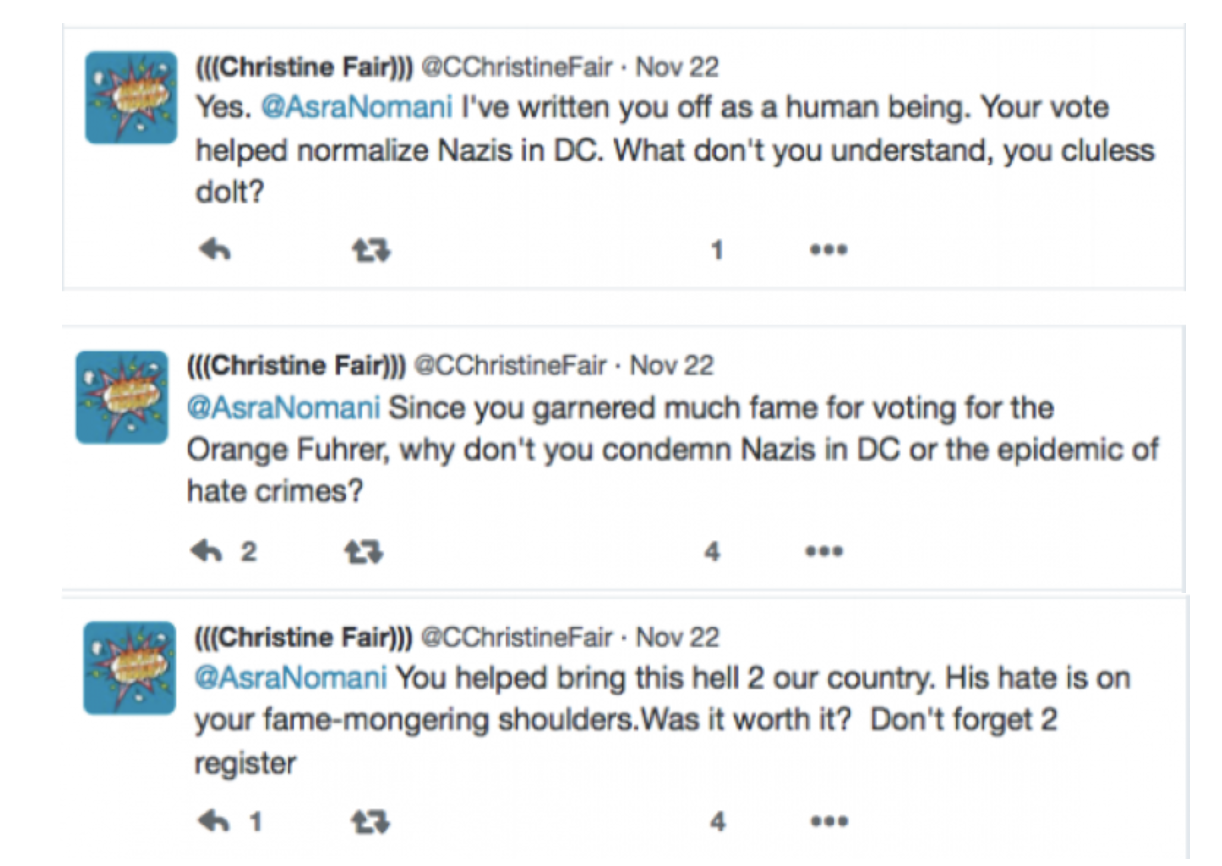 And this crazy lady is still at Georgetown teaching our children, and in my humble opinion, she’s gotten worse.

Look at thus chorus of entitled white men justifying a serial rapist’s arrogated entitlement.
All of them deserve miserable deaths while feminists laugh as they take their last gasps. Bonus: we castrate their corpses and feed them to swine? Yes. https://t.co/tT7Igu157y

“Professor Fair’s extremely offensive and violent remark goes against everything in line with Georgetown’s values,” TJ Collins, a recent Georgetown graduate told Campus Reform. “President DeGioia should immediately issue a statement condemning the tweet, and Professor Fair should not be permitted in the classroom ever again,” Collins added.

“As a student applying to this school, I wouldn’t have dared use that kind of language on a social media platform, especially surrounding a sensitive and controversial issue. Georgetown wouldn’t have admitted me if they had seen stuff like that,” a current Georgetown student who wished to remain anonymous, told Campus Reform.

“I don’t think people that Georgetown actually employs should be held to a significantly lower standard. And clearly, any of her students that see this rant are going to feel threatened if they have opinions that differ from hers” the student continued.

Upon being contacted by Campus Reform to comment for this article, Fair stated, “There is a war going on against women and you, and your despicable herd of so-called journalists seeking to protect male privilege and shame women for our victimization or our rage are complicit in this war.”

Crazy Christine met some opposition to her hatred on Twitter:

This is a call for targeted violence against our government & should be investigated as such: pic.twitter.com/1cVRy3Vu9v

There’s seriously something wrong with you, you need to be medicated, pronto????????

It would be terrible to see all her info. Don’t ya think?

NO! Doxing is wrong, even if its the Nutty Professor.

YOU are a “Professor?”

YIKES, they hate her, they really hate her. Look:

Apparently this particular comment on her was found to be the most useful. pic.twitter.com/PY8EJLr4LM

And now a message for @Jack:

@twitter showing its bias once again, throttling conservative voices, removing accounts, while this person and her hate remains.

Look at you, an entitled white woman arrogated and entitled, calling for
white men to have miserable deaths while feminists laugh as they take their last gasps. Bonus: you all castrate their corpses and feed them to swine? Yes. You are a monster. A hate filled feminist monster.

Despite her hatred, Georgetown keeps her on their staff:

Hey @Georgetown, surely you must realize that given this woman’s recent history, it’s highly unlikely that her “interaction with students be free of bias and geared toward thoughtful, respectful dialogue.” She’s a shock jock at best or suffers some form of psychopathy at worst.

holy crap. you teach law? unbelievable that you ignore the part of the accused to be innocent till PROVEN guilty. btw, your rhetoric is far more disgusting than anything trump has said

Hey @GeorgetownLaw @Georgetown care to comment on your radical professor calling for the deaths and racism of innocent Senators? WTH is going on with Higher Ed? What a disgrace.
#1 – Twitter should ban this person yesterday – liberal will get a pass
#2 – Georgetown should FIRE

On Georgetown’s website, it says “Established in 1789, Georgetown is the nation’s oldest Catholic and Jesuit university. Drawing upon the 450-year-old legacy of Jesuit education, we provide students with a world-class learning experience focused on educating the whole person through exposure to different faiths, cultures, and beliefs.”

Now I am not a Jesuit or a Catholic, but It’s hard to understand why “the nation’s oldest Catholic and Jesuit university,” would want a woman who calls for the death of people she opposes politically, harrases a Muslim woman because she voted for Trump, runs a blog called Tenacious Hellpussy, which she describes as “a nasty woman posting from the frontlines of f**kery” (asterisks added),  and a twitter feed that uses the “F” word more often than Al Pachino did in Scarface, on their staff.

Don’t shove the First Amendment at me, the First Amendment prevents the government from infringing on free speech, not private, Catholic Universities.  Hey Georgetown as we say in Yiddish, it’s time to put “tuchus affen tisch,” put your butt on the table and fire Crazy Christine.  I for one wouldn’t want her teaching my kids.