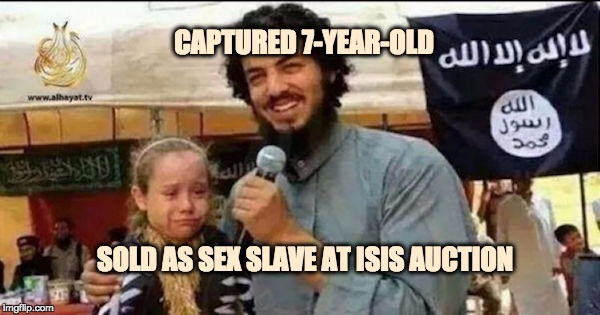 This is the new standard of measure that everyone should get used to… some things are morally reprehensible UNLESS you do them as a Muslim in the Muslim way.

That is basically what Georgetown Professor of Islamic Studies and Muslim convert Jonathan Brown is teaching in his University these days, and he is nor far off.

During a recent lecture at the International Institute of Islamic Thought, Brown told his audience that men do not necessarily need consent to have sex with a woman, and that slavery is not in and of itself wrong.

In a lecture that spanned about an hour and twenty minutes (embedded below)  Dr. Brown condemned the practices of slavery in the West (and China), while attempting to argue that slavery in the Muslim world has been far kinder and gentler (which is completely untrue).

The truth is that slavery and rape are acceptable per the Quran, however as an Professor at a Jesuit University (Georgetown) in the United States, perhaps Professor Brown shouldn’t be so gung-ho, seemingly endorsing the practice.

Umar Lee is a freelance writer (and a Muslim) who happened to be attending the lecture and was shocked and dismayed at what he heard Dr. Brown teaching.

“Indeed, according to Brown, slaves in the Muslim world lived a pretty good life. I thought the Muslim community was done with this dishonest North Korean style of propaganda. Obviously not…

Brown constructs a world where the wrongs of the West excuse any wrongs (if he believes there are any) in the Muslim World.”

However, Brown went even lower to defend both slavery and rape. He argued that neither slavery nor non-consensual sex (we in the West call this rape) are necessarily immoral.

“It’s not immoral for one human to own another human,” Brown stated in his clearest defense of slavery. Brown went onto state that being an employee is basically the same as being a slave…

Apparently slavery is big in Islam, in fact according to the website, The Religion of Peace, “Islam neither ignores nor condemns slavery. In fact, a large part of the Sharia is dedicated to the practice.” And apparently the Quran devotes more verses to sex slaves than it does to praying five times a day.

Gee as someone who works for himself does that mean I am enslaved by myself? And is that allowed? Does enslaving oneself damage ones eyesight and make them grow hair on their palms?

And on the question of rape, The Religion of Peace reports that “under Islamic law, rape can only be proven if the rapist confesses or if there are four male witnesses.  Women who allege rape without the benefit of the act having been witnessed by four men (who presumably develop a conscience afterwards) are actually confessing to having sex.  If they or the accused happens to be married, then it is considered to be adultery.”

“Consent isn’t necessary for lawful sex,” said Professor Jonathan Brown of Georgetown University… Brown emphatically stated consent is a modern Western concept and only recently had come to be seen as necessary (perhaps around the time feminism began to take root and women decided they wanted autonomy over their bodies). Brown went on to elaborate consent wasn’t necessary to moral and ethical sex…

Lee concludes his post on the lecture by reminding his readers that if a Catholic, or a Protestant, or a Jew had made these same comments in the same context, they would immediately be attacked by academia and the liberal media. He argued that any non-Muslim University employee who would make a similar defense of slavery or rape would immediately be fired from their position and likely not find work in academia ever again. Sadly, when a Muslim professor does it… no one even bats an eye.

It’s a damning condemnation of the state of our culture, but don’t expect Dr. Brown to be condemned or fired by Georgetown anytime soon.