George Lopez Now Says He Was Only Joking About Murdering Trump

Aren't Jokes Supposed To Be Funny? 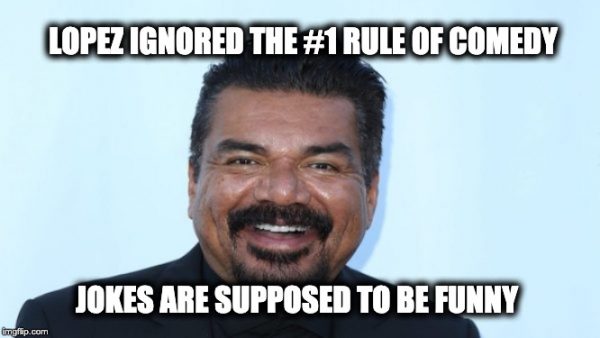 Supposed comedian George Lopez made headlines this weekend after he responded to the news of a call on Iranian state television for an $80 million bounty on President Donald Trump’s head by saying “We’ll do it for half.” After getting beaten up on social media, George Lopez says he was only joking. 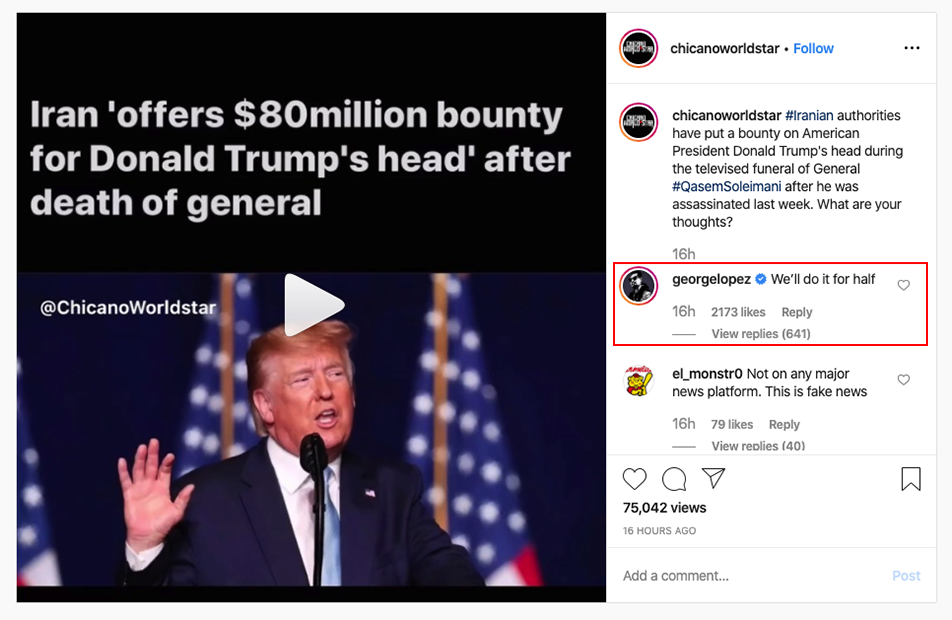 Lopez received an adverse reaction to his failed joke from the Twitterverse as the assassination of a US President, of either party.is not funny, especially to the Secret Service. Per TMZ, the Secret Service is looking into the comment and will be interviewing Lopez soon.

Why are Hollywood leftists obsessed with killing the president?

RT so they can’t ignore!

But there were many others including comedian Terrence Williams,

We have a duty to report any threats or violence against the President, his family or anyone in his administration.

The Great One Mark Levin

Makes me sick to my stomach. I hated everything @BarackObama stood for but I would never wish him any harm. #LiberalismIsAMentalDisorder #LibsAreToxic #TrumpDerangementSyndrom

George Lopez should be arrested. That is a direct threat.

Not even funny as a joke. He needs a ‘wellness check’ from the Secret Service.

There were many more. In fact, on Monday, “George Lopez trended on twitter.

After getting excoriated on social media, he backtracked, saying it was only a “joke.”

According to Fox News and others, representatives for Lopez claimed the viral remark was “a joke.”

According to Fox News, when reached for comment, a representative for Lopez said the irreverent remark was simply “a joke” and should not be taken literally.  Immediately after the comment went viral, George Lopez’s name began trending on social media as well as the phrase “arrest George Lopez,” with many Twitter users calling for the Secret Service to investigate him.

“Although many were upset, others were quick to defend the star’s comment and noted that it’s very similar to a past remark made by singer Ted Nugent in 2012, which was investigated by the Secret Service,” reports Fox News. “The singer publicly told President Barack Obama to ‘suck on my machine gun,’ prompting outrage from the left. The authorities investigated Nugent over the comment but eventually deemed the issue resolved with no further action being taken.”

Despite the backlash on social media, Lopez seems undeterred, as this is not the first time the often hyperbolic comedian has voiced his negative opinions about Trump to his many fans and followers.

He previously used a water bottle to simulate urinating on Trump’s Hollywood Walk of Fame star, mocked Trump’s reported $50,000 golf simulator and was charged after he got into a slight physical altercation with a Trump supporter at a Hooters.

As someone who laughs at almost anything, I don’t find Lopez’s anti-Trump stunts funny.  Even the stunt above with Hollywood Walk of Fame star is no pisser (sorry I had to).

Granted, we don’t live in normal times, and sadly, there are a lot of people out there who, thanks to leftists like Lopez, the Democrats and their allies in the media, think that assassinating a president they disagree with is funny.

Still, it would be nice if, just for once, these leftists would admit they meant what they said.