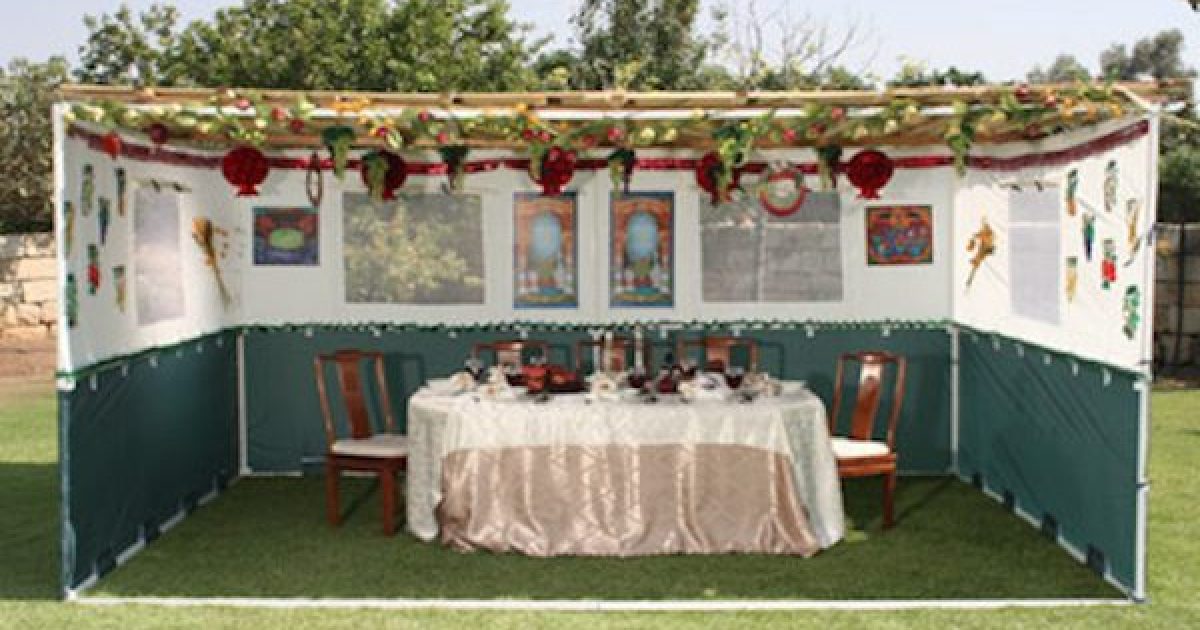 This year Sukkot begins at sundown this coming Sunday, 10/13. Sukkot is one of the three most important Jewish festivals (the other two are Passover and Shavuot). Rosh Hashana and Yom Kippur are big holidays also, but not festivals.  I know what some of you are thinking, and the answer is no, the other Festivals we celebrate like Chanukah, Purim, and my birthday were either created by Rabbis, other great leaders, or as in the case of my birthday by a blogger looking for attention. The three “biggie” festivals are the only ones ordained by God in the Torah, along with Rosh Hashana and Yom Kippur.  While some Rabbis act like they are on the same level as the big guy upstairs, the vast majority have normal egos.  Thus the holidays ordained in the Torah by God are considered most important. gentiles guide Sukkot  gentiles guide Sukkot

The five day period after Yom Kippur leading up to Sukkot are the most dangerous days in the Jewish calendar (and it’s not because God starts zapping those who didn’t make it into the book or iPad of life on the Day of Atonement). It’s the one time each year one can find some Jewish men using tools building a Sukkah for the Holiday.

During biblical times the Children of Israel would come to Jerusalem from all over the holy land to celebrate those three festivals. Sukkot must have been a rough one for the Jews who lived far from Jerusalem because they were required to be at the holy temple for Rosh Hashana, Yom Kippur, and Sukkot for more than three weeks on the road.

The celebration of Sukkot is commanded in chapter 24, verse 34, in the third book of the Torah, Vayikra (known by Gentiles as Leviticus). Jews call each book of the Torah by the first words in the book. In the case of the third book, it’s Vayikra, which means ‘And He called.” The “He” is the big guy upstairs. Anyway that verse says

Oh, wait,  I forgot to tell you. Rosh Hashana, the Jewish New Year, is the first day of Tishrei, the Seventh month in the Jewish calendar (when God created the universe). In the Jewish tradition, it is one fo the four New Years.

Back to Sukkot– part of the holiday observance is to create a flimsy “structure” with a semi-see-through roof–the roof must be built from something that grows in the ground.  The structure is called a Sukkah (see picture on top of this post). My friend Eddie built his Sukkah from scratch using raw materials.  He is what’s known in Hebrew as שוויצר, which translates as “freaking show-off.” As for me,  I put together a pre-fabricated Sukkah, which sadly doesn’t save my fingers from injury when trying to pound the metal frame together.

During Sukkot, we eat, entertain, and some even sleep in this structure. Personally, my favorite part of the holiday is inviting over friends and hanging out in the Sukkah, It seems less pressured than when they come into the house and hang out because if we drop something, it doesn’t matter we are outside.

The holiday reminds us of the life of the ancient Israelites wandering in the wilderness for 40 years living in structures like this (and arguing over whether or not Moses should stop at a gas station to ask for directions). More importantly, existing in this kind of flimsy structure reminds us of the frailty and transience of life and in the end, our necessary dependence on God to protect us.

Sukkot has a lot of significant meanings, perhaps the best one for today’s world is the fact that it is the Holiday when we pray for the rest of the world. And whatever your religion or political affiliation, I am sure that you will agree that the world needs it! In Biblical times, the High Priest used to make 70 sacrifices during Sukkot, representing a prayer for each of the nations of the world. (I would imagine that the five days before Sukkot was a period of prayer for the 70 cows about to be sacrificed).

By the way, do you want to know how many Jews get lights for our Sukkahs?  You ever go into Walmart in mid-January and see the store is selling Christmas lights for $1.99 a case? Well, the guy you see in the parking lot wheeling the extra-large shopping cart filled with boxes of Christmas lights is probably a Jew who bought them to light his Sukkah. So I guess some can say Sukkot is the Jewish holiday with the “Christmas Spirit.”

Sukkot is a happy holiday. It is referred to in Hebrew as Yom Simchateinu (the day of our rejoicing) or Z’man Simchateinu (the time of our rejoicing). The reason for our happiness has nothing to do with the fact that we are allowed to eat (after Yom Kippur) or that we put down our hand tools without any significant damage to our bodies (possibly).BTW some historians believe that the first Thanksgiving was modeled after Sukkot.

From building the Sukkah, “living in it’ for a week, to tearing it down, Sukkot is a fun and Joyous time which we share with family and friends, both Jewish and Gentle. We also invite ancient Jewish figures into our Sukkah, one different every night. These figures are called Ushpizin (righteous guests) and include Abraham, Isaac, Jacob, Joseph, Moses, Aaron, and David. Don’t worry, these guys don’t eat or drink that much. I suspect the prophet Elijah doesn’t show up because he is still tipsy from the wine he had on Passover.

Oh, and the reason the five days after Yom Kippur is the most dangerous period in the Jewish calendar? It’s an interesting story. Jews do not start preparing for any holiday before the previous one has ended. It’s not a superstition thing, it’s that we need to focus all of our attention on the holiday at hand before we can move on to the next. This is doubly important when the holiday before is Yom Kippur when we are praying extra hard to make a personal connection with God.

On the five days after Yom Kippur, Jews all across the world, start building their Sukkahs.  The problem is that most Jews aren’t great with tools. And for many of us (like yours truly), the last time we picked up a tool or stepped on a ladder was when we took down the Sukkah the year before. So you can probably have a belly laugh if you peek out your window and observe your Jewish neighbor building their Sukkah–it is the construction equivalent of the Keystone Kops. Well, except for my friend Eddie the Sukkah show-off.

Sukkot is celebrated for eight days (sort of) in the diaspora and seven in Israel. The reason for the (sort of) is that the last two days are actually different holidays Shemini Atzeret and Simcha Torah-more on that later.

Shemini Atzeret celebrates our love for God, his relationship with the Jewish people, and we add a special prayer for rain (Geshem). I don’t really understand the rain prayer because, during Sukkot, there is usually a strong rainstorm/windstorm that blows our Sukkah from our patio onto the grass. Perhaps it’s God’s way of making all Jews everywhere feel like NY Jets fans.

Simcha Torah is a fun day. Jews read the end of the Torah and then the beginning.  SPOILER ALERT: The Torah ends with Moses dying, but studying Torah is a continual lifetime process, so we go from the death of Moses right into the baseball reference, “In The Big Inning.”  Simcha Torah is a fun gala where we sing, dance with the Torah Scrolls, wave flags, etc.

There’s one more important part of the Sukkot celebration, the Lulav, and the Etrog, also known as the four species. The lulav is a palm branch, joined with myrtle and willow branches, and the Etrog is citron fruit. It kind of looks like a lemon that suffers from boils. The four species are held and waved during various parts of the synagogue service on Sukkot.

Sukkot starts Sunday night at sundown. Maybe everyone can join me over the next few days, and pray for the safety of the people in all nations. May they all remain safe and prosperous, may the ones who fight terror remain vigilant, the ones that promote terror, reform their ways, and the ones who are on the fence get a backbone.

BTW you don’t have to be Jewish to pray for the world—as Kinky Freedman, the Jewish country music star, would say, “May the God of your choice bless you.”

And as we say in the momma loshen (mother tongue-Yiddish): Have a Gut Yuntif (a good holiday).