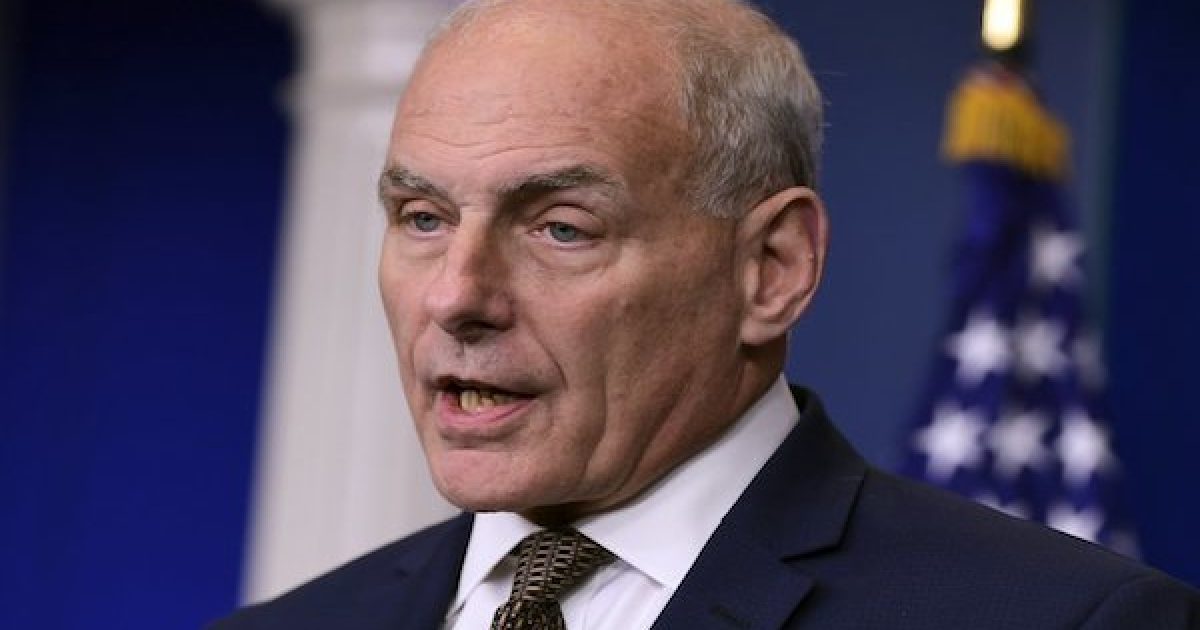 According to Congresswoman Frederica Wilson, President Trump was insensitive when he made a condolence call to Myeshia Johnson the pregnant widow of Army Sgt. La David Johnson, who was killed in Niger earlier this month. Wilson a critic of President Trump and who is a family friend of the Johnsons was in the car when the POTUS called and claimed claims he said that Johnson insensitively said the Sgt. “knew what he signed up for…but when it happens, it hurts anyway.” Which is not exactly what he said, nor was it the tone he said it.

White House Chief of Staff Gen. John Kelly was present while Trump was calling the families of the four Green Berets killed in Niger and took the opportunity to put the congresswoman in her place.

On Thursday, he spoke at the daily press briefing and while he was talking the usual buzz from the press pool was replaced with a deafening silence, General Kelly explained the process of what happens when a soldier dies and even spoke about how he was notified of his son’s death in action and what he told the President to say on the phone calls.  He emotionally explained how he was stunned the Congresswomen would listen in on the phone call. He said that he is absolutely disgusted at how the congresswoman is acting and what she is accusing Trump of. He said he can’t believe that she would listen in on the call the begin with, and then to exploit it afterward.

Frederica Wilson doesn’t really have an emotional attachment for our military heroes. After all, according to VoteSmart.org she voted against every military or veterans oriented legislation since she was first elected to Congress, except for the one where she didn’t record a vote: 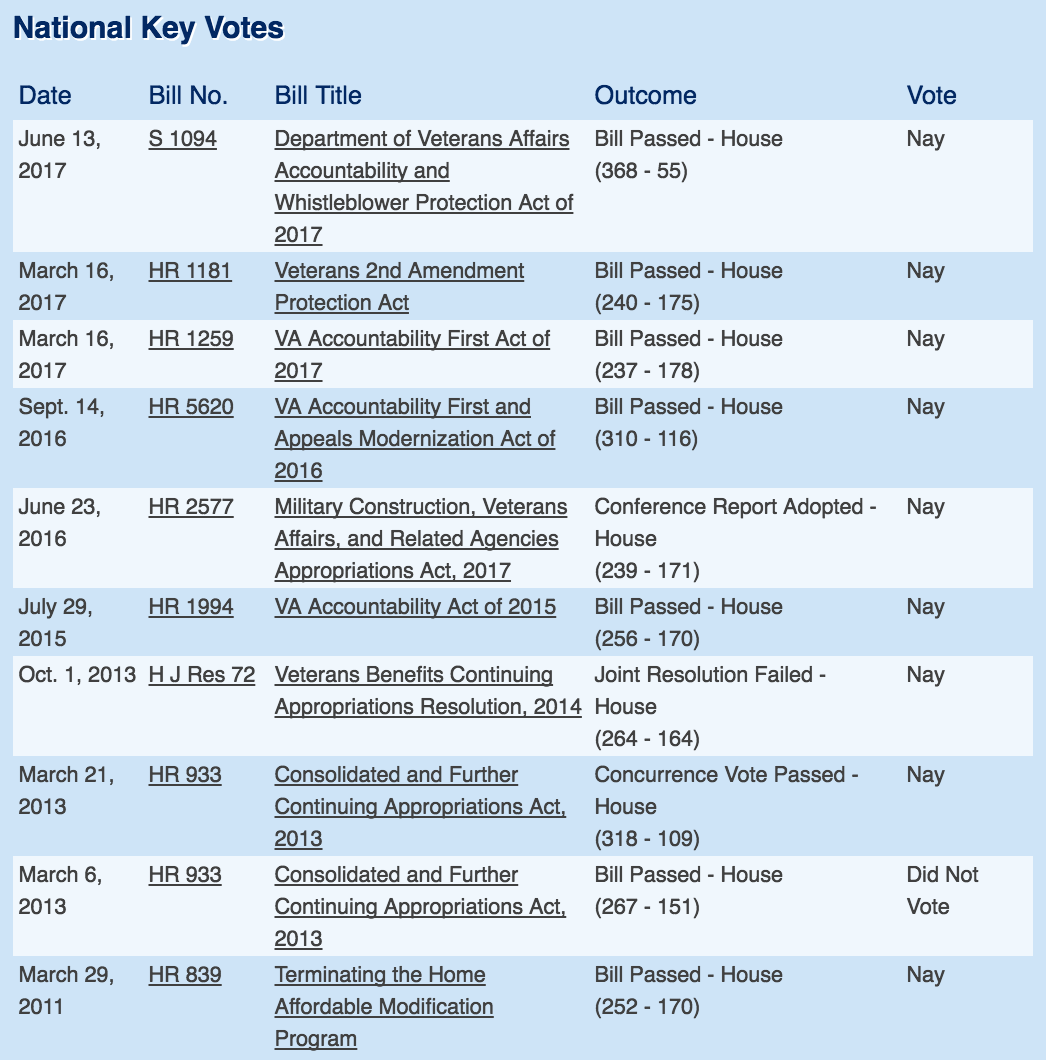 On Thursday, General Kelly displayed something that Congresswoman Frederica Wilson will never have…class.

Well, thanks a lot. And it is a more serious note, so I just wanted to perhaps make more of a statement than an — give more of an explanation in what amounts to be a traditional press interaction.

Most Americans don’t know what happens when we lose one of soldiers, sailors, airmen, Marines, our Coast Guardsmen in combat. So let me tell you what happens:

Their buddies wrap them up in whatever passes as a shroud, puts them on a helicopter as a routine, and sends them home. Their first stop along the way is when they’re packed in ice, typically at the airhead. And then they’re flown to, usually, Europe where they’re then packed in ice again and flown to Dover Air Force Base, where Dover takes care of the remains, embalms them, meticulously dresses them in their uniform with the medals that they’ve earned, the emblems of their service, and then puts them on another airplane linked up with a casualty officer escort that takes them home.

A very, very good movie to watch, if you haven’t ever seen it, is “Taking Chance,” where this is done in a movie — HBO setting. Chance Phelps was killed under my command right next to me, and it’s worth seeing that if you’ve never seen it.

So that’s the process. While that’s happening, a casualty officer typically goes to the home very early in the morning and waits for the first lights to come on. And then he knocks on the door; typically a mom and dad will answer, a wife. And if there is a wife, this is happening in two different places; if the parents are divorced, three different places. And the casualty officer proceeds to break the heart of a family member and stays with that family until — well, for a long, long time, even after the internment. So that’s what happens.

Who are these young men and women? They are the best 1 percent this country produces. Most of you, as Americans, don’t know them. Many of you don’t know anyone who knows any one of them. But they are the very best this country produces, and they volunteer to protect our country when there’s nothing in our country anymore that seems to suggest that selfless service to the nation is not only appropriate, but required. But that’s all right.

And yeah, the letters count, to a degree, but there’s not much that really can take the edge off what a family member is going through.

So some Presidents have elected to call. All Presidents, I believe, have elected to send letters. If you elect to call a family like this, it is about the most difficult thing you could imagine. There’s no perfect way to make that phone call.

When I took this job and talked to President Trump about how to do it, my first recommendation was he not do it because it’s not the phone call that parents, family members are looking forward to. It’s nice to do, in my opinion, in any event.

So when I gave that explanation to our President three days ago, he elected to make phone calls in the cases of four young men who we lost in Niger at the earlier part of this month. But then he said, how do you make these calls? If you’re not in the family, if you’ve never worn the uniform, if you’ve never been in combat, you can’t even imagine how to make that call. I think he very bravely does make those calls.

The call in question that he made yesterday — or day before yesterday now — were to four family members, the four fallen. And remember, there’s a next-of-kin designated by the individual. If he’s married, that’s typically the spouse. If he’s not married, that’s typically the parents unless the parents are divorced, and then he selects one of them. If he didn’t get along with his parents, he’ll select a sibling. But the point is, the phone call is made to the next-of-kin only if the next-of-kin agrees to take the phone call. Sometimes they don’t.

So a pre-call is made: The President of the United States or the commandant of the Marine Corps, or someone would like to call, will you accept the call? And typically, they all accept the call.

So he called four people the other day and expressed his condolences in the best way that he could. And he said to me, what do I say? I said to him, sir, there’s nothing you can do to lighten the burden on these families.

Well, let me tell you what I told him. Let me tell you what my best friend, Joe Dunford, told me — because he was my casualty officer. He said, Kel, he was doing exactly what he wanted to do when he was killed. He knew what he was getting into by joining that 1 percent. He knew what the possibilities were because we’re at war. And when he died, in the four cases we’re talking about, Niger, and my son’s case in Afghanistan — when he died, he was surrounded by the best men on this Earth: his friends.

That’s what the President tried to say to four families the other day. I was stunned when I came to work yesterday morning, and brokenhearted at what I saw a member of Congress doing. A member of Congress who listened in on a phone call from the President of the United States to a young wife, and in his way tried to express that opinion — that he’s a brave man, a fallen hero, he knew what he was getting himself into because he enlisted. There’s no reason to enlist; he enlisted. And he was where he wanted to be, exactly where he wanted to be, with exactly the people he wanted to be with when his life was taken.

It stuns me that a member of Congress would have listened in on that conversation. Absolutely stuns me. And I thought at least that was sacred. You know, when I was a kid growing up, a lot of things were sacred in our country. Women were sacred, looked upon with great honor. That’s obviously not the case anymore as we see from recent cases. Life — the dignity of life — is sacred. That’s gone. Religion, that seems to be gone as well.

Gold Star families, I think that left in the convention over the summer. But I just thought — the selfless devotion that brings a man or woman to die on the battlefield, I just thought that that might be sacred.

And when I listened to this woman and what she was saying, and what she was doing on TV, the only thing I could do to collect my thoughts was to go and walk among the finest men and women on this Earth. And you can always find them because they’re in Arlington National Cemetery. I went over there for an hour-and-a-half, walked among the stones, some of whom I put there because they were doing what I told them to do when they were killed.

I’ll end with this: In October — April, rather, of 2015, I was still on active duty, and I went to the dedication of the new FBI field office in Miami. And it was dedicated to two men who were killed in a firefight in Miami against drug traffickers in 1986 — a guy by the name of Grogan and Duke. Grogan almost retired, 53 years old; Duke, I think less than a year on the job.

Anyways, they got in a gunfight and they were killed. Three other FBI agents were there, were wounded, and now retired. So we go down — Jim Comey gave an absolutely brilliant memorial speech to those fallen men and to all of the men and women of the FBI who serve our country so well, and law enforcement so well.

There were family members there. Some of the children that were there were three or four years old when their dads were killed on that street in Miami-Dade. Three of the men that survived the fight were there, and gave a rendition of how brave those men were and how they gave their lives.

And a congresswoman stood up, and in the long tradition of empty barrels making the most noise, stood up there and all of that and talked about how she was instrumental in getting the funding for that building, and how she took care of her constituents because she got the money, and she just called up President Obama, and on that phone call he gave the money — the $20 million — to build the building. And she sat down, and we were stunned. Stunned that she had done it. Even for someone that is that empty a barrel, we were stunned.

But, you know, none of us went to the press and criticized. None of us stood up and were appalled. We just said, O.K., fine.

So I still hope, as you write your stories, and I appeal to America, that let’s not let this maybe last thing that’s held sacred in our society — a young man, young woman going out and giving his or her life for our country — let’s try to somehow keep that sacred. But it eroded a great deal yesterday by the selfish behavior of a member of Congress.