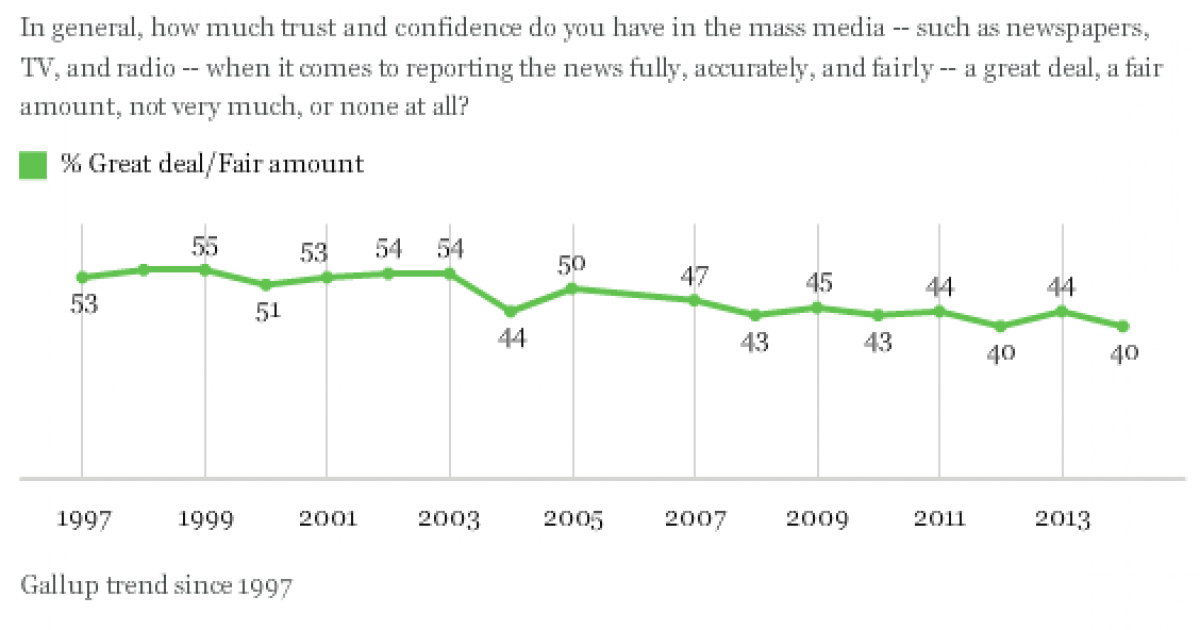 A new Gallup poll finds that Americans’ confidence in the media’s ability to report the news “fully, accurately and fairly” has dropped back to its all-time-low, recorded two years ago. Only four in 10 Americans express a “great deal” or a “fair amount” of confidence in newspapers, television and radio in reporting the news, a return to its lowest recorded level, recorded in 2012. The trust in media had increased a bit to 44 percent in 2013, but has dropped since then.

This drop of trust is part of a long-term trend of disillusionment with the mainstream media that generated the citizen journalism movement and media watchdogs such as TruthRevolt. The source of the mistrust was explained in a Gallup release:

As has been the case historically, Americans are most likely to feel the news media are ‘too liberal’ (44 percent), rather than ‘too conservative’ [19 percent], though this perceived liberal bias is now on the lower side of the trend. One in three (34 percent) say the media are ‘just about right’ in terms of their coverage–down slightly from 37 percent last year.

The Democrats have declined to a 14-year low of 54 percent, down from 60 percent in 2013. Their belief is that the mainstream media is too conservative. Only 27% of Republicans trust the media (down from 33%), and media trust among Independents is at 38%, almost the same as the 37% in 2013.

Granted this report is will come as no surprise for most conservatives but it’s nice to know the lefties are coming along.