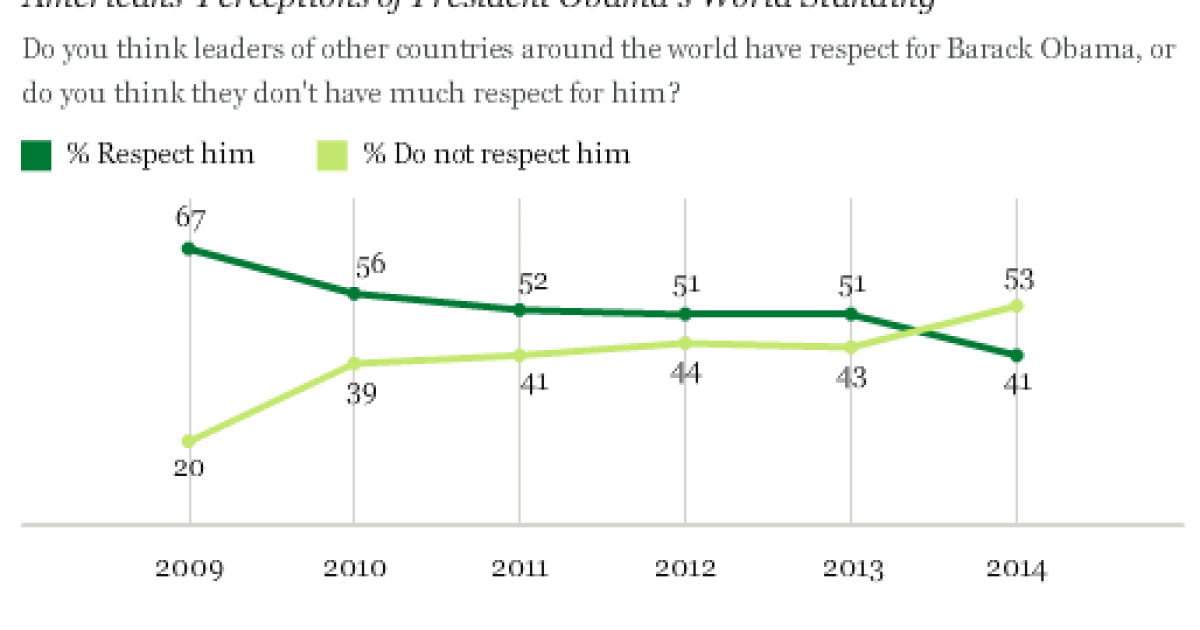 Remember when Barack Obama ran for president promising that he would return America to world prominence? Those days are gone. In a poll released by Gallup on Monday morning, for the first time since he became president, most American’s think world leaders do not respect Barack Obama . In fact the public’s opinions have shifted 20 percentage points in the past twelve months from 8 percentage points positive to 12 negative. 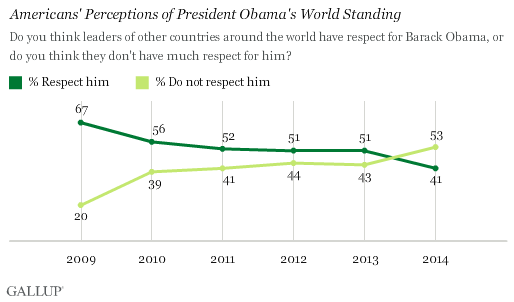 The decline in the past twelve months is probably tied to his failed “red line” in Syria, the sellout Iran deal, the NSA spying on foreign leaders, the gains made by al Qaeda in Iraq and increased tensions with Russian strongman Vladimir Putin. 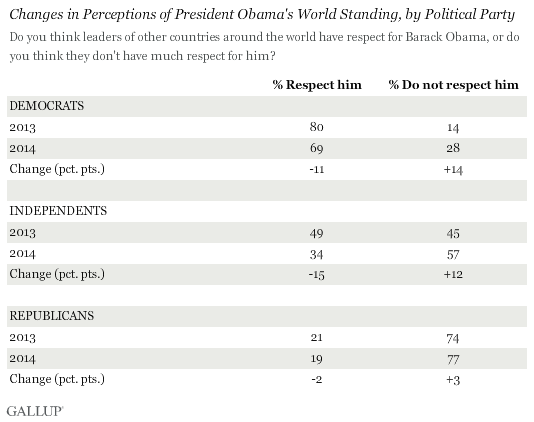 By a slim margin most Americans believe that the United States is still viewed favorably by other countries (51-47%), but 61% are dissatisfied by the position of the country in the world today. 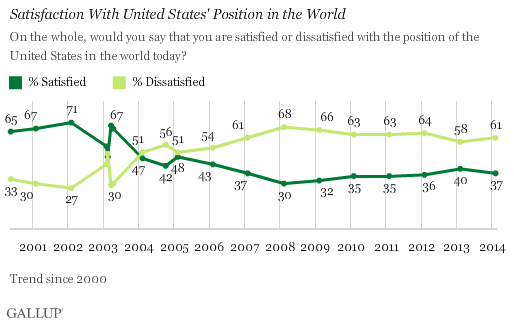 When Obama ran for reelection in 2012 most of the mainstream media talking heads believed foreign policy was among the President’s strongest accomplishments. In actuality just like they were doing with domestic policy, the pundits were ignoring his failed policies.

My late friend and teacher Barry Rubin used to rail about this President’s lack of understanding of how to operate on the world stage, an opinion echoed by Charles Krauthammer last week when he appeared on the Hugh Hewitt show:

I did write about the fact that very early on in 2009, the Obama administration, with its cosmic naiveté, produced this reset with Russia. And we can see now the fruits of the reset. Putin immediately understood he was dealing with an adolescent, naïve in Obama who gave him a victory in Poland and Czech Republic on missile defense, where remember, Obama just jettisoned it as the way to appease Russia, and to show how he was going to play nice, assuming reciprocal behavior. Well now, we’re seeing that reciprocal behavior in the streets of Ukraine. Ukraine is the key to determining whether Putin will succeed in rebuilding a mini Soviet empire. Without Ukraine, Russia cannot do that. With Ukraine, it becomes a mini Soviet empire with Kazakhstan on one side, and Belarus already subdued on the other. And then it puts pressure on Eastern Europe. Putin understands that, which is why he stepped in to prevent Ukraine from concluding this deal with the European Union that would have consigned Ukraine to the West, to freedom, and to democracy, which is what those people are in the streets for. And that’s why they’re getting their heads bashed in.

It isn’t that Barack Obama’s policies changed in the past year; more likely Americans have caught up with reality.