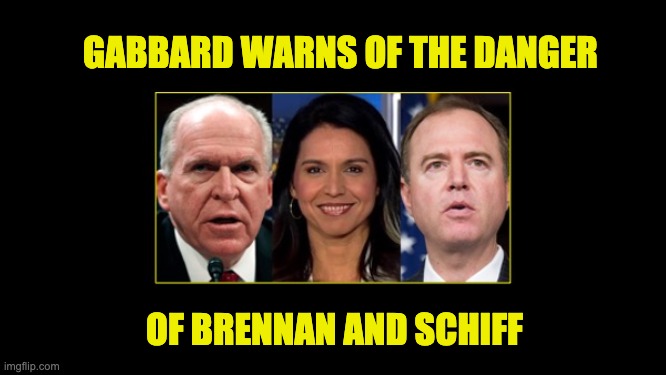 Former presidential candidate Tulsi Gabbard unloaded on Rep. Adam Schiff (also known as the Bug-Eyed Bull-Sh**ting Bloviating Barrister Of Burbank), former CIA director (and perjurer) John Brennan, and the Big Tech companies, referring to them as “domestic enemies.” In a video clip and blistering Twitter thread, Gabbard denounced the Capitol rioters for their actions earlier this month but accused people like Schiff and Brennan of being far more dangerous. Gabbard Slammed Schiff and Brennan

“The mob who stormed the Capitol on January 6 to try to stop Congress from carrying out its constitutional responsibilities were behaving like domestic enemies of our country,” Gabbard said.

“But let’s be clear, the John Brennans, Adam Schiffs, and the oligarchs in Big Tech who are trying to undermine our constitutionally protected rights and turn our country into a police state with KGB-style surveillance are also domestic enemies,” she continued.

Gabbard alleged that they are also “much more powerful, and therefore dangerous than the mob that stormed the Capitol.”

The mob who stormed the capitol to try to stop Congress from carrying out its constitutional responsibilities were behaving like domestic enemies of our country. But let us be clear, the John Brennan's, Adam Schiffs and the oligarchs in Big Tech who are… pic.twitter.com/Q3VssCiz5l

Schiff (D-CA) – chairman of the House Intelligence Committee – introduced a bill in 2019, which is receiving additional consideration in light of the Capitol riots, that seeks to expand the definition of domestic terrorism.

And Big Tech companies quite blatantly tried to sway the election by censoring only one side of the political aisle and allowing President Biden’s claims to go uncensored. They subsequently banned many far-right accounts from their platforms.

“I call upon you [and] all of Congress from both parties to denounce efforts by Brennan [and] others to take away our civil liberties endowed to us by our Creator [and] guaranteed in our Constitution,” Gabbard urged.

President Biden, I call upon you & all of Congress from both parties to denounce efforts by Brennan & others to take away our civil liberties endowed to us by our Creator & guaranteed in our Constitution. If you don’t stand up to them now, then our country will be in great peril.

The former Rep. said it would create “a very dangerous undermining of our civil liberties, our freedoms in our Constitution, and a targeting of almost half of the country.”

“You start looking at obviously, have to be a white person, obviously likely male, libertarians, anyone who loves freedom, liberty, maybe has an American flag outside their house, or people who, you know, attended a Trump rally,” Gabbard said.

.@joebiden Your leadership is needed now to denounce those like John Brennan & Rep Schiff who are advocating for targeting half the country as potential domestic terrorists. Truly unite the American people around our Constitution & the rights that are endowed to us by our Creator pic.twitter.com/OpemBm4biS

Gabbard demanded that President Biden “denounce” people like Brennan and Schiff.  However, it is doubtful that the feeble President’s handlers will allow him to denounce the Perjurer or the Bug-Eyed Bull-Sh**ting Bloviating Barrister Of Burbank, two of the Democratic party’s best political slanderers.