Meanwhile On The High Seas: Is A Russian Submarine Inviting Itself To The G7 Summit? 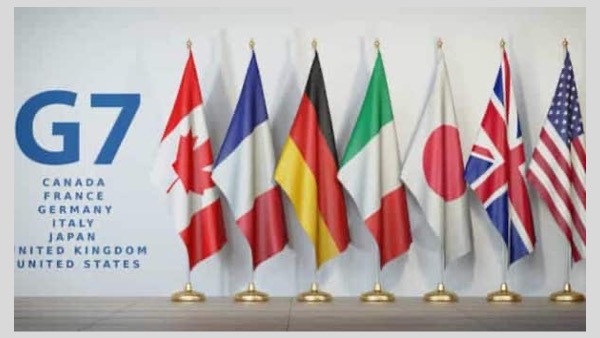 The Washington Examiner suggested on Wednesday 9 June that a Russian submarine may be operating off the coast of Cornwall, UK, as the G7 assembles there (once again without Russia, since the invasion of Ukraine in 2014) for a summit to be held this Friday (11 June) through Sunday. G7 Summit

Author Tom Rogan noted that antisubmarine warfare (ASW) aircraft from the UK, U.S., and France were operating in the area from early this week, along with HMS Northumberland (F238), a Type 23 frigate.  Northumberland is reportedly performing general security patrols for the summit but has advanced sonar and integrated ASW capability as well. G7 Summit

Rogan speculates that if there’s a Russian submarine in the area, it may be a nuclear-powered Yasen-class cruise missile submarine (SSGN) from the Russian Northern Fleet.  There are two Yasens in commission, Severodvinsk (K-560) and Kazan (K-561), the latter having just been delivered to the Russian navy in May 2021.

I assume it is not Kazan, which only arrived at its new home port of Zapadnaya Litsa, on the Kola Peninsula, on 1 June 2021.

Kazan would, in any case, require a period of work-ups and drills before embarking on its first operational deployment.

Severodvinsk may be a possibility, however.  The submarine was absent from Zapadnaya Litsa in satellite imagery of 27 May 2021, and there haven’t been open-source reports of a return to port since then. G7 Summit

#OSINT #BMØ #Navy #Russia Kola Peninsule, Ura Guba 27-05-2021. All three Active Northern Fleet Project 949(AM) Oscar II submarines are back alongside at their base. One just got back from (probably) a patrol, while K-266 Orel returned from maintenance. image @planet pic.twitter.com/k0H24z5RWS

(Note: the base complex in the image is Zapadnaya Litsa, not Ura Guba, as a satellite image comparison will confirm.  A rare labeling glitch by tweep OSINT-1.  Zapadnaya Litsa has been Severodvinsk‘s home port since the sub joined the fleet eight years ago, and Kazan fulfilled expectations by moving there this past week after formal delivery to the fleet in May.)

In other words, K-560 Severodvinsk was absent from port at least as early as 27 May, meaning it has had adequate time to get to the coast of Cornwall (though I would estimate, in the absence of additional information, that it left some time before that if it’s off Cornwall now). G7 Summit

Other candidates to be off Cornwall this week would include up to three Akula-class attack submarines and five Kilo-class attack subs of the Northern Fleet.  The Oscar-II SSGNs mentioned in the tweet, having been observed in port on 27 May, are not good candidates, though they can’t be eliminated based on the limited information.  Ballistic missile submarines of the strategic forces (e.g., Delta-IV and Borei-class SSBNs) are categorically not candidates for this kind of patrol.  (Merely as a matter of weapons geography, the location would put an SSBN in a poor position for using the long-range missiles it carries.)

The Akulas and Severodvinsk would be of particular interest because of their land-attack cruise missile capabilities (the “Granit” and “Kalibr” missiles, respectively, both of which have ranges in excess of 900 nautical miles).  The Kalibr missile has seen live use in Syria.  Both missile types are thought to be nuclear-capable; their presence offshore would up the ante on the reemerging missile race in Europe.

The UK defense secretary, Ben Wallace, has recently told UK media that Russian submarines have been “circling Britain’s entire coastline,” citing both the history of Russian subs transiting through the English Channel on the way to and from the Baltic and a reported detection of a Russian sub in the Irish Sea at the end of 2020.

According to the Daily Mail, “The Defence Secretary has said that Russia’s submarines are ‘circling Britain’s entire coastline’ and warned that Putin’s force remains our ‘number one adversary threat’.” 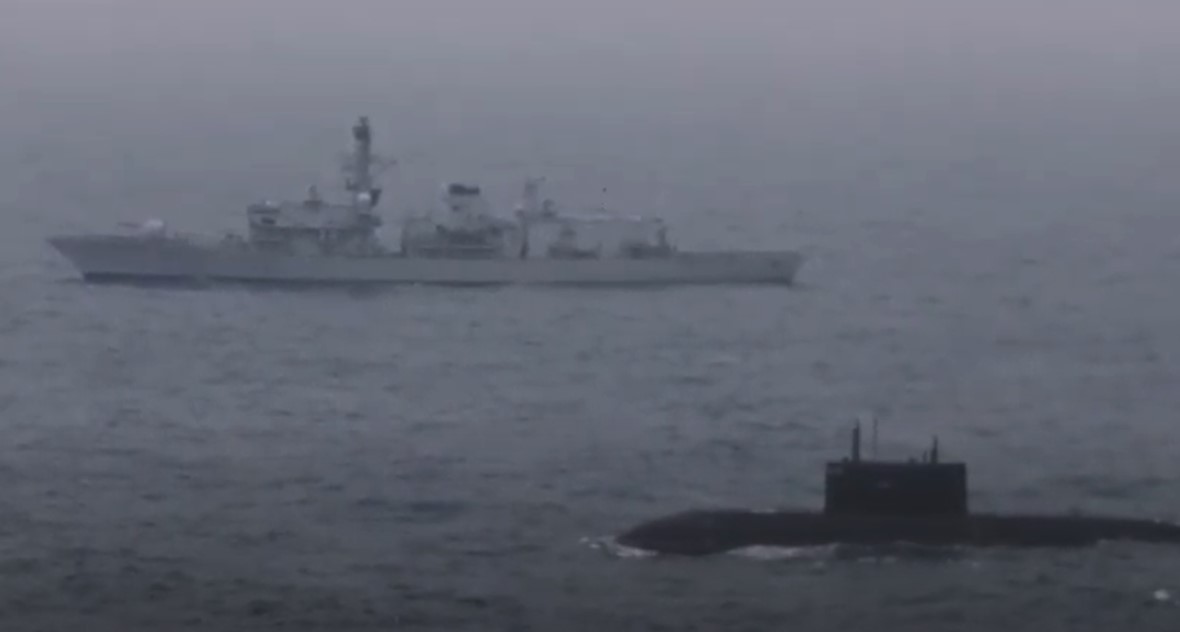 The Mail continued:  “Ben Wallace, 51, attacked Russia for ‘regularly’ sending their ships to UK waters, and claimed Moscow had carried out ‘a number of operations, deliberately at Britain’.  Mr. Wallace, who has been the Secretary of State for Defence since 2019, also told the Telegraph that a Russian kilo-class submarine was spotted in the Irish Sea for the first time in a ‘very, very long time at the end of last year.”

A Russian sub confirmed by expert observers in the Irish Sea would be a very, very rare detection.  Even in the later years of the Cold War (i.e., the 1980s), the Irish Sea was not a likely operating area for the former-Soviet navy, in spite of its obvious interest in UK submarine bases located on its coast.

The Kilo-class in the Irish Sea in 2020 was probably from the Northern Fleet.  As mentioned in the coverage of Mr. Wallace’s comments, a Kilo from the Black Sea Fleet was tracked heading into the Baltic Sea in October 2020 and left again for a return to the Black Sea in 2021.  But the submarine was accompanied by a tug, transited on the surface, and appeared to be headed for the shipyard in St. Petersburg for maintenance.  The same was true when the visiting Kilo departed the Baltic in February.  The sub would have had to go through the Denmark Strait to get to the Irish Sea, and there is no evidence it did so.

There is a Kilo assigned to the Baltic Fleet still, but it, like the deployed unit from the Black Sea, would have to go through the Denmark Strait to get to the Irish Sea.  One of the Kilos from the Northern Fleet would be able to approach the British Isles undetected from the Norwegian Sea.

Old Cold War hands readily recognize that Russia is continuing to rebuild a higher-operating-tempo profile – although “circling Britain” is a new come-out.  Tom Rogan is probably accurate in his allusion to “Putin’s enjoyment at seeing what he can get away with in relation to testing British security.”

“Putin assumes, with unfortunate credibility,” says Rogan, “that Britain will tolerate areas of his aggression so as to retain Russian financial interests on its soil.”

There’s something to that.  There’s also the lamentable lack of investment in fleet procurement and maintenance by the UK over the last 20 years – a pattern in which the Brits are by no means unique.  The U.S. may have invested more, but during the Obama years courted a perilous loss of readiness with the budget sequestrations that wreaked havoc with maintenance and upgrade schedules across our armed forces, bringing long-term consequences for the Navy that we are still trying to recover from.

“Atlantic NATO” may still have ASW assets to mount a sub-hunt with, but we are short of the inventory we had, drilled and ready, 30 years ago.

All that said, however, some perspective is necessary as we head to the G7 summit.  If Russia has a submarine operating off Cornwall, the submarine probably didn’t deploy to the area just for the G7.  It’s probably been out watching the massive NATO exercise held along the western coastlines of Europe and in the North Atlantic and the Norwegian Sea this spring. 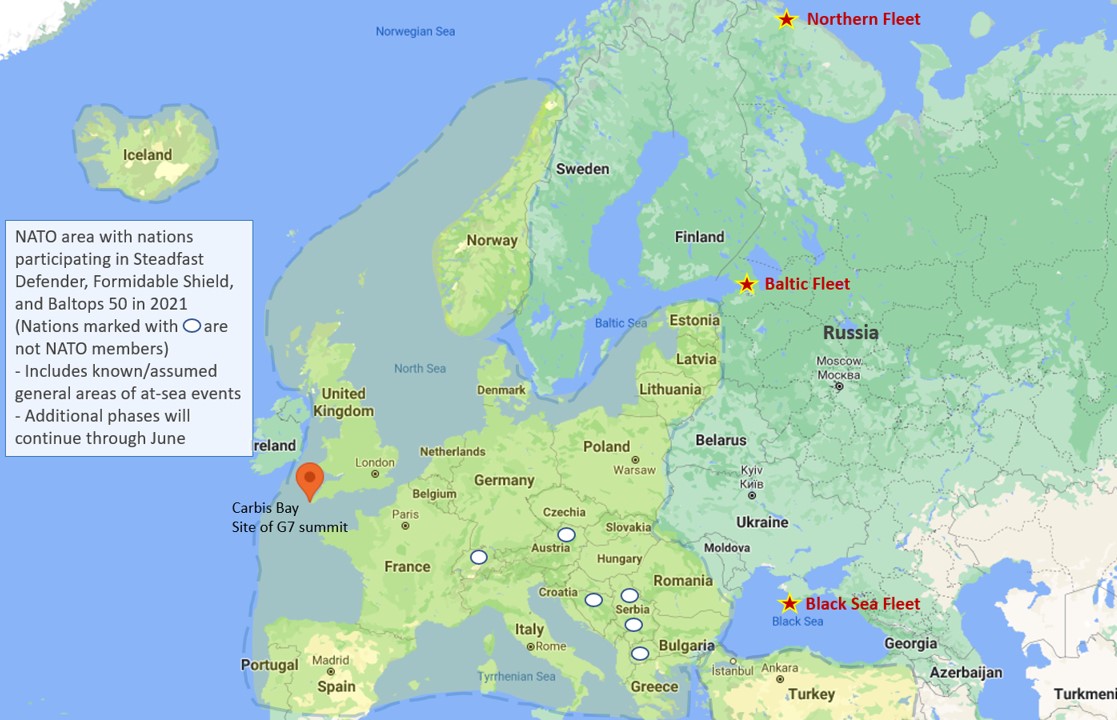 The first phase of Exercise Steadfast Defender took place in May and early June with fleet assets from 11 NATO nations, headlined by the UK’s HMS Queen Elizabeth Strike Group and the USS Iwo Jima/24 MEU (Marine Expeditionary Unit) Amphibious Ready Group (ARG).  The Steadfast Defender exercises are similar to the Cold War-era “Reforger” exercise series, which stood for “Return of Forces to Germany” and featured the U.S. and Canadian forces deployed to Europe to reinforce the NATO allies on the Continent.

In 2021, Steadfast Defender’s first phase was integrated with Queen Elizabeth’s pre-deployment work-ups, which took her from fleet operating areas west of Scotland, England, and Wales to a NATO live exercise off Portugal in late May.

Simultaneously, meanwhile, NATO mounted a major air and missile defense exercise, Formidable Shield, with the command element in Scotland but using operating areas spread across Europe.  Between Steadfast Defender and Formidable Shield, NATO forces in the thousands were engaged from Romania to the coast of Norway, where U.S. P-8 Poseidon maritime patrol aircraft conducted live missile launches at a target barge. 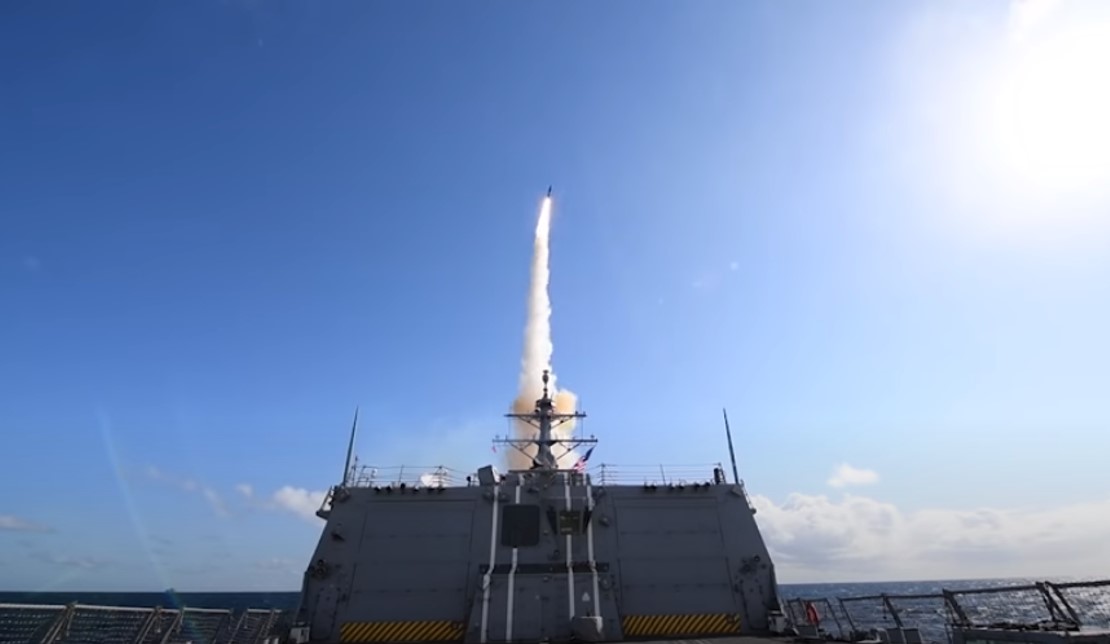 Other noteworthy events during these exercises included a cooperative missile-defense engagement of a simulated medium-range ballistic missile by escort ships of the U.S. and Netherlands Navies; other live air defense engagements by five other NATO nations’ assets; and the first firing by the U.S. Marines in Europe of their High Mobility Artillery Rocket System (HIMARS).

There was plenty to interest Russian intelligence collectors, and enough of it taking place at sea to keep a submarine absolutely fascinated for weeks.

But there’s more.  Already underway now is Exercise “BALTOPS 50” – Baltic Operations, a regularly held NATO exercise in the Baltic approaches and Baltic Sea, which later in June will culminate in a demonstration amphibious landing in Lithuania (yes) by the U.S. II Marine Expeditionary Brigade and Expeditionary Strike Group 2, which function as the command elements for the expeditionary forces under U.S. Second Fleet.

The Second Fleet command is based on the U.S. East Coast, and its participation in BALTOPS, as well as the exercises in the Atlantic, emphasizes the theme of forces from North America reinforcing the defense of Europe.

For nearly two decades, Russia participated in BALTOPS under NATO’s Partnership for Peace cooperative outreach.  But since 2014 and the invasion of Ukraine, that partnership has been suspended.

Head-to-head at the strategic level

Thus, Russia sees NATO operating in force across the approaches to all three of her western-facing fleets: the Northern Fleet, the Baltic Fleet, and the Black Sea Fleet, which must pass Romania, Turkey, and Greece to get to the Mediterranean.

Russia has been by no means passive, to be sure.  Russian Defense Minister Sergei Shoigu recently announced a massive expansion of Russian force deployments in the west, a move that will increase the deadness of the dead-letter Conventional Forces Europe (CFE) limitations once observed by agreement between Russia and NATO.  It’s all build-up now.  Moscow is reportedly planning a very large iteration of the Russian forces’ “Zapad” (West) exercise series in later summer and early fall of 2021, an evolution that will undoubtedly stretch from the Caucasus to the edge of the Arctic north of the Kola Peninsula.

Meanwhile, the U.S., for reasons I remain skeptical of, has chosen now to punctuate the up-tempo NATO profile with strategic bomber flights over Europe, including a B-52 Stratofortress flight over Paris, with a French fighter escort, on Memorial Day.  It has never been routine to fly our global strategic bombers over Europe, and it sends a gratuitous signal that I believe we should be thinking a lot harder about.  There are less confrontational ways to send credible readiness signals.  (Not that Russia is being non-confrontational, with frequent bomber flights over the Arctic making close approaches to the U.S and Canada, and history of drive-bys close to the UK.)

There is, unfortunately, of course, the credibility problem of not knowing whether a cognitively compromised President Biden is fully in command of the nuclear football, or – perhaps worse – whether it’s someone who isn’t publicly and formally designated to fill that role, whose identity may or may not be Vice President Harris.  We live in interesting times. 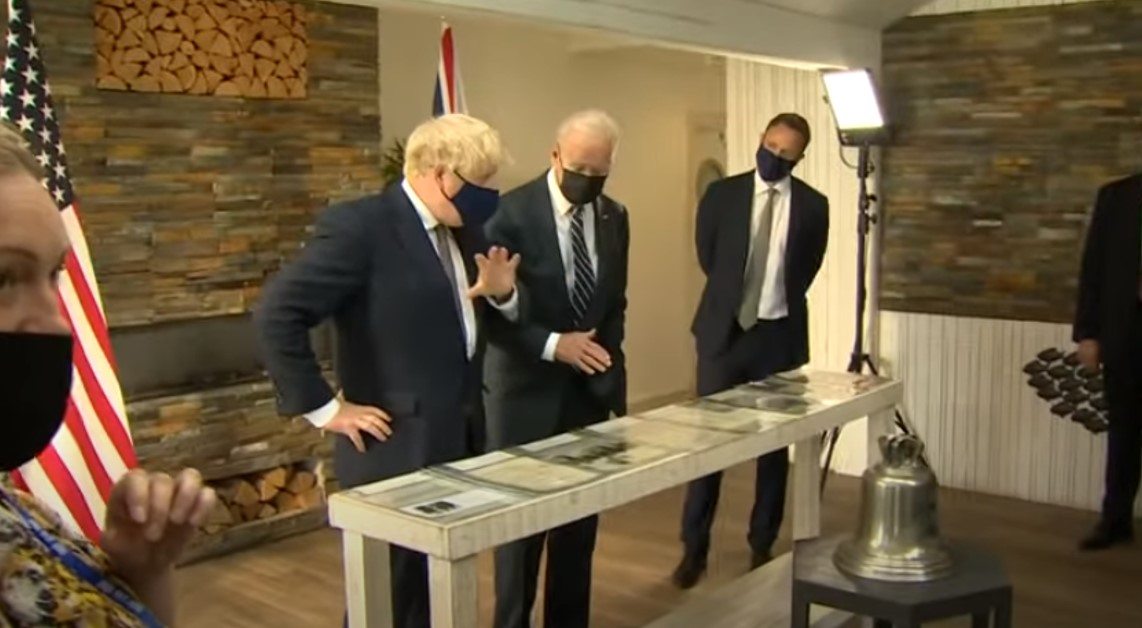