In 1863 President Abraham Lincoln signed the Emancipation Proclamation freeing all of the African slaves in the south. Two years later, the 13th Amendment was passed and slavery was finally outlawed in the United States, or so we thought.

Apparently slavery is alive and well, but unlike America’s horrible history, these slaves are not beaten, they do not live in horrible shacks treated like animals. They don’t toil in the fields for no wages, in fact these saves make an average of $1.9 million dollars. These slaves weren’t kidnapped from their homeland to toil in their bondage, no they were drafted after being forced to attend a university, in most cases for free.  These slaves are pampered, treated like stars and are forced to engage in combat once a week. Along with that burden, some of them are even forced to endure the attention of some of the prettiest “babes”  in their respective cities. 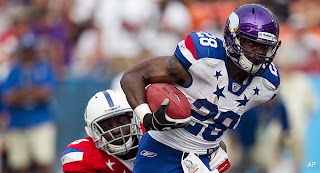 Who are these slaves?

It’s modern-day slavery, you know? People kind of laugh at that, but there are people working at regular jobs who get treated the same way, too. With all the money … the owners are trying to get a different percentage, and bring in more money--Adrian Peterson NFL Running Back

It’s very hard not to feel sorry for these poor underprivileged few, especially when place them next to the teachers in Wisconsin who have spent the last few weeks protesting.  After all the teachers were simply whipped into a frenzy by a national labor movement that cares much more about progressive politics than the needs of the teachers.  But these NFL players have to wear the shackles of bondage all of the time. These heavy shackles are known by the special slave football jargon–BLING.

Peterson relates himself to the “people working at regular jobs.” I don’t know many people working at “regular Jobs” making $1.9 million a year, or anywhere close to Peterson’s $7 million/year.

As someone who hasn’t had a regular paycheck since the first week of September, I would be happy to take an NFL players shackles bling and earn two million to play football. Well only if the health plan is good, after all I will probably need a doctor after the first play. I guarantee you that most of the 8.9% of American adults who are out of work would join me volunteering for the slavery, even if Sports Illustrated magazine declared we would only be counted as 3/5 of a person for census purposes.

I am not claiming that the owners are wrong, nor do I doubt the players arguments.  What I do know is that it is specifically this type of arrogance and entitlement that makes people believe that the NFL players have no connection with reality.

Slavery?  Stupidity! Let them go work pumping gas for a few years, or put on a blue apron and welcome people to Wal-Mart, that’s if they can get find someone to hire them, 13+ million of Americans face that problem every day.