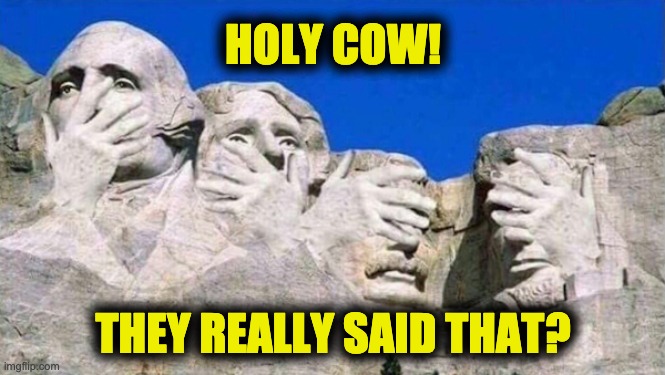 Remember when words mattered?  You know what I am talking about. When words had a meaning before they are artificially softened. The days before taxes were called revenue enhancements, before government spending of our hard-earned money was called investments, when there were terrorists instead of militants, and illegal aliens were not undocumented persons. founding fathers

Back then, words mattered. Sure, at times, they may have been harsh-sounding PC changes to the language, like when this Oscar winner announcement became “the Oscar goes to,” instead of “the winner is.” After all, who wants to hurt the feelings of a mediocre actor who made millions for acting in a movie that nobody saw. Just in time for Fathers’ Day and just a little early for Independence Day, here’s yet another slap in the face from the Department of Woke Semantics (as opposed to the department of anti-Semitics. That Dept. is known by its more common name, the Democratic Party). founding fathers

The Federal Reserve’s Board of Governors provided semantic guidance to the rank and file as we get ready to face dizzying inflation numbers.  Does it have something to do with institutional integrity? Policy about the correct handling of sensitive information? Something to keep the ship of state from washing up on the shoals of another recession? Nope, It bans terms like Founding Fathers.

Nah. It had far loftier goals about not hurting feelings. In a meeting on April 29, the following guidance was issued.

“Try to avoid words and phrases that may be considered offensive, pejorative, or prejudiced (whether consciously or unconsciously), as these can distract your audience from the ideas/information you’re trying to convey,” it continues.

The Fed also said the terms “whitelisted, “manpower,” “manmade,” and “singular generic pronouns” – such as “he,” she,” “his,” and “hers” – should be replaced with more “bias-free” alternatives like “allowed,” “artificial,” and pronouns such as “they,” “their” and “theirs.”

At least now we can understand why the feds tried to cover up the Wuhan Lab leak theory. After all, that would mean COVID-19 was manmade, and that’s a bad word.

I wonder if the fed will make NBC change the name of its hit show, The Blacklist? It would be hard to do. They’d need an entirely new marketing campaign which would be expensive because they’d have to have to hire more er, personpower.

Leave it to the language Police to be offended by perfectly serviceable and comprehensible terminology while offering clumsier words with more opaque meanings in their place.

That’s peak bureaucracy, folks. These clowns are why Regan so famously said, “The nine most terrifying words in the English language are ‘I’m from the government, and I’m here to help.’”

Of course, it could worse, The Federal Reserve could be calling America’s founding fathers something like militant undocumented British.

The most ironic part is when the Board of Governors said this:

‘…as these can distract your audience from the ideas/information you’re trying to convey….’

That is an almost textbook example of how arbitrary government red tape actually makes life worse for anything it touches.

Do they have any plans of dealing with inflation? Or are they too busy admiring their unearned authority over the American language?