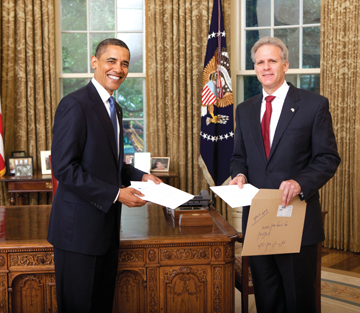 When Michael Oren was selected to be Israel’s Ambassador to the United States it wasn’t because he was a Netanyahu partisan because he wasn’t still isn’t it was because he was a scholar and someone who was a dual citizen until he was named to the diplomatic post.  Oren is highly respected historian and award-winning author of books about America and Israel, who is widely
viewed as a voice of reason in both countries.

An Oren composed op-ed posted on the WSJ website Monday lays the blame for the problems between the US and Israel on both President Obama and Prime Minister Netanyahu but with one major difference “while neither leader monopolized mistakes, only one leader made them deliberately.”

Oren stated by going through a list of Israel blunders, some were Netanyahu’s fault, others were the fault of others in the government:

Yet many of Israel’s bungles were not committed by Mr. Netanyahu personally. In both episodes with Mr. Biden, for example, the announcements were issued by midlevel officials who also caught the prime minister off-guard. Nevertheless, he personally apologized to the vice president.

And if you remember that apology to Biden was followed by Hillary Clinton calling Bibi and screaming at him for 45 minutes.

Mr. Netanyahu’s only premeditated misstep was his speech to Congress, which I recommended against. Even that decision, though, came in reaction to a calculated mistake by President Obama.

According to Oren, Obama was dedicated to screwing up the Israeli/United States friendship from his first day in office.

From the moment he entered office, Mr. Obama promoted an agenda of championing the Palestinian cause and achieving a nuclear accord with Iran. Such policies would have put him at odds with any Israeli leader. But Mr. Obama posed an even more fundamental challenge by abandoning the two core principles of Israel’s alliance with America.

The first principle was “no daylight.” The U.S. and Israel always could disagree but never openly. Doing so would encourage common enemies and render Israel vulnerable. Contrary to many of his detractors, Mr. Obama was never anti-Israel and, to his credit, he significantly strengthened security cooperation with the Jewish state. He rushed to help Israel in 2011 when the Carmel forest was devastated by fire. And yet, immediately after his first inauguration, Mr. Obama put daylight between Israel and America.

“When there is no daylight,” the president told American Jewish leaders in 2009, “Israel just sits on the sidelines and that erodes our credibility with the Arabs.” The explanation ignored Israel’s 2005 withdrawal from Gaza and its two previous offers of Palestinian statehood in Gaza, almost the entire West Bank and half of Jerusalem—both offers rejected by the Palestinians.

Mr. Obama also voided President George W. Bush’s commitment to include the major settlement blocs and Jewish Jerusalem within Israel’s borders in any peace agreement. Instead, he insisted on a total freeze of Israeli construction in those areas—“not a single brick,” I later heard he ordered Mr. Netanyahu—while making no substantive demands of the Palestinians.

At the time Hillary Clinton said there was never an agreement between Israel and the US about natural expansion of major settlement blocs. But Elliot Abrams who negotiated the agreement for the United States said Clinton’s contention is simply not true.

Consequently, Palestinian President Mahmoud Abbas boycotted negotiations, reconciled with Hamas and sought statehood in the U.N.—all in violation of his commitments to the U.S.—but he never paid a price. By contrast, the White House routinely condemned Mr. Netanyahu for building in areas that even Palestinian negotiators had agreed would remain part of Israel.

The other core principle was “no surprises.” President Obama discarded it in his first meeting with Mr. Netanyahu, in May 2009, by abruptly demanding a settlement freeze and Israeli acceptance of the two-state solution. The following month the president traveled to the Middle East, pointedly skipping Israel and addressing the Muslim world from Cairo.

Israeli leaders typically received advance copies of major American policy statements on the Middle East and could submit their comments. But Mr. Obama delivered his Cairo speech, with its unprecedented support for the Palestinians and its recognition of Iran’s right to nuclear power, without consulting Israel.

Similarly, in May 2011, the president altered 40 years of U.S. policy by endorsing the 1967 lines with land swaps—formerly the Palestinian position—as the basis for peace-making. If Mr. Netanyahu appeared to lecture the president the following day, it was because he had been assured by the White House, through me, that no such change would happen.

Israel was also stunned to learn that Mr. Obama offered to sponsor a U.N. Security Council investigation of the settlements and to back Egyptian and Turkish efforts to force Israel to reveal its alleged nuclear capabilities. Mr. Netanyahu eventually agreed to a 10-month moratorium on settlement construction—the first such moratorium since 1967—and backed the creation of a Palestinian state. He was taken aback, however, when he received little credit for these concessions from Mr. Obama, who more than once publicly snubbed him.

But it was more than that Oren complains about Obama’s once-sided statements and leaks “intended to deter Israel from striking Iran pre-emptively.”  But the real kick in the guts was the announcement in 2014 that Israels primary ally had been secretly negotiating what turned out to be a bad deal with its most deadly enemy.

The daylight between Israel and the U.S. could not have been more blinding. And for Israelis who repeatedly heard the president pledge that he “had their backs” and “was not bluffing” about the military option, only to watch him tell an Israeli interviewer that “a military solution cannot fix” the Iranian nuclear threat, the astonishment could not have been greater.

Now, with the Middle East unraveling and dependable allies a rarity, the U.S. and Israel must restore the “no daylight” and “no surprises” principles. Israel has no alternative to America as a source of security aid, diplomatic backing and overwhelming popular support. The U.S. has no substitute for the state that, though small, remains democratic, militarily and technologically robust, strategically located and unreservedly pro-American.

What Oren doesn’t mention (because he can’t as long as she is a possibility to be president, is that Obama’s partner in these policies was none other than Hillary Clinton. And if she is elected president the horrible eight years of Israel/US relations called the Obama administration, will be extended. Because while Obama has created daylight between himself and Israel, there is little daylight between Obama and Clinton in attitude toward Israel.