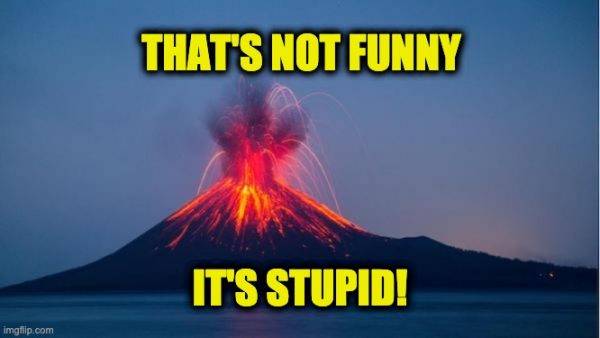 There is no escaping the “dunk on Trump” partisan press–even when it comes to science articles. Forbes Science tweeted a link to an article addressing whether or not lava could kill the coronavirus.

Technically lava can kill coronavirus, but there's a good reason why no-one is using it in the fight against the ongoing pandemic: nothing else would survive the encounter with molten rock either.https://t.co/IOWeDY9zzt pic.twitter.com/xZ5o7h3F4f

Just in case they realize how incredibly stupid this tweet is, here’s a screenshot for posterity. 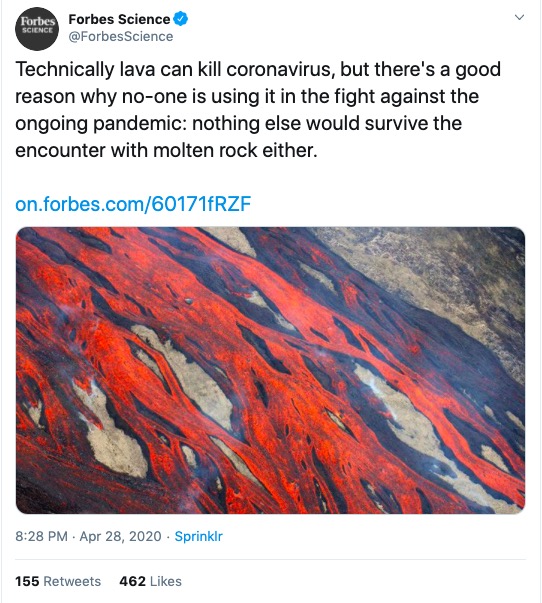 Apparently, the article was written because someone actually posed the question.

And they actually decided to address it.

Robin Andrews, senior contributor to Forbes Science received the email question and used the opportunity to (of course!) dunk on Trump supporters.

I was recently emailed a question that really is a sign of the times: namely, can lava kill the coronavirus?

I don’t suspect that anyone, including the sender of said email, was planning to sterilise their house with lava. But I wouldn’t put it past the people who, erroneously lured by the president’s breathtakingly idiotic idea of consuming virus-annihilating bleach and disinfectant, were hoping to ingest something a little stronger in order to send SARS-Cov-2 packing. Lava is fortunately quite difficult to get your hands on, and personal supplies of the stuff are few and far between.

Saying that, the simple answer is yes: lava would obliterate the coronavirus. But a more interesting response here involves a little detour into the history of heat-loving microbes.

Oh, look at that–Andrews includes in his article that Trump-supporting rubes are consuming bleach and disinfectants because the President made an off-hand comment about that the liberal cherry-picked and twisted. When did President Trump say that people should “inject bleach” or “inhale Lysol”?  Actually, he asked the doctors to check it out, then added “It wouldn’t be through injection.  We’re talking about through almost a cleaning, sterilization of an area.  Maybe it works, maybe it doesn’t work.  But it certainly has a big effect if it’s on a stationary object.”

But that’s what the partisan press is doing these days–create a straw man argument, imagine someone who believes it, attack them as stupid, then behave as though that’s accurate reporting. It’s the “Fine People Hoax” meets David Brooks’ “Flyover Man.”

We saw how this played out last time when the liberal media attempted to blame Trump for an Arizona couple that consumed fish tank cleaner allegedly because the President had touted the use of hydroxychloroquine as a possible treatment for COVID-19 and it resulted in the man’s death. It turns out that there is something more to the story as the death is now being investigated by Mesa, AZ homicide detectives.

Did the liberal media ever come clean on that one? Nope. Just like everything else that puts them in a bad light, they’ve memory-holed it.

This article by Andrews is following the same presumptions that the political reporters use–Trump supporters are by definition stupid.

Andrews’ article continues to contain some actual science and discusses how microbes can survive in inhospitable environments. In many respects, it was a reasonable article, but he just had to smash in the anti-Trump stuff to make sure that everyone knows that he is so much more intelligent than President Trump and his supporters.

He even concluded his article with another snide shot at those who might consider using some molten rock as a “disinfectant.”

Lava does appear to be a limit for life. Viruses, which aren’t technically lifeforms, can’t hack it either. So yes, lava would kill the new coronavirus. But for the love of all that is rational, please don’t try to kill SARS-CoV-2 with lava if you just happen to own any molten rock: the virus may perish, but your house, belongings or oesophagus wouldn’t survive the ordeal either.

The question that should be posed to Andrews is who is the real idiot in this scenario?

The fictional Trump supporter whose ideas and stupidity Andrews pulled out of his own ass before ‘disproving’ him, or Andrews himself for thinking he’s a hero for destroying this made-up guy?

Because obviously, not a single Trump supporter has any idea about the basics of medical science. Not even, say, Dr. Carson, who famously performed that separation of conjoined twins.