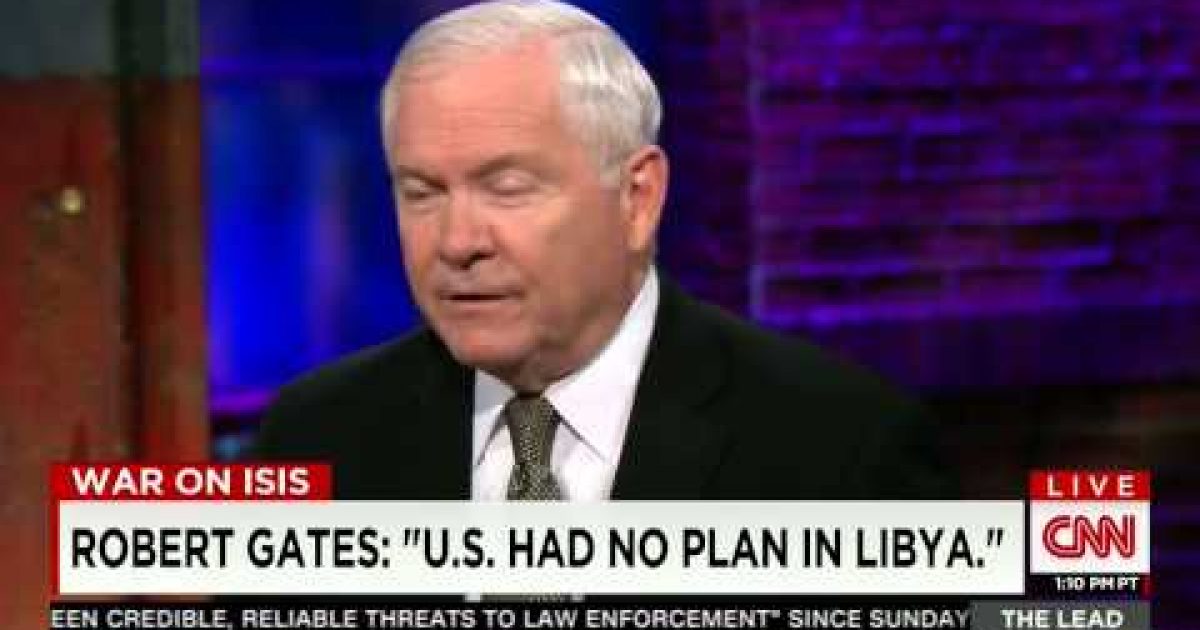 CNN’s Jake Tapper hosted Secretary of Defense, Robert Gates on “The Lead” Tuesday, and the Defense Secretary in the Bush #43 and Obama administrations was not kind to President Obama and his Secretary of State Hillary Clinton. He criticized Obama for not trying harder to leave a residual force in Iraq and Ms. Clinton for pushing the president to get involved in Libya.

Tapper asked Gates the a version of the question reporters are asking GOP candidates, “Knowing what we know now…” Except Tapper didn’t ask about going into Iraq he asked about coming out (a question reporters should ask Hillary).

Tapper: Let me ask you a question about a recent decision. Knowing then what we know now about ISIS in Iraq, was it a mistake for President Obama not to have pushed harder to get U.S. Troops in Iraq?


Gates: I think even had there been no ISIS that it would have been far better for us to maintain some presence, some troop presence in Iraq for a much longer period of time. Our presence there gave us access and gave us influence. We were able to constrain Maliki’s worst instincts. We were able to ensure that the leadership of the Iraqi security services was based on competence and merit. And once we left, all of the generals that we had trained and that we had helped select were all fired and replaced by a bunch of political hacks. One of the reasons that the Iraqi security forces are so hapless is so many of their officers were political appointees with no skill. Even had there been no ISIS, a longer-term presence by U.S. Forces, I think, was necessary.

Gates wrote in his book ‘Duty’ that the only big disagreement he had with Hillary Clinton was over Libya. He wanted the U.S. to leave Libya alone, Hillary wanted a U.S. intervention. On Tuesday he said looking at it in hindsight he was right and Hillary’s position was incorrect.

Tapper: You write in the book about the only major decision with which you disagreed with then Secretary Of State Hillary Clinton with whom you had a strong working relationship–you said whether or not the U.S. should intervene militarily in Libya. Looking back on it, you feel comfortable in your decision? I mean the again side in Benghazi was prevented and yet you look at what’s going on in Libya, it’s hard to argue that the Obama administration had a plan for yards.

Gates: The irony is some of those who are the most critical of President Bush not having a plan in Iraq after Saddam Hussein was ousted didn’t have a plan for what to do in Libya after Gaddafi was ousted. I believe if you look at Libya today, that my opposition to our intervening there was the right thing to have done. I think particularly once we prevented the humanitarian slaughter that we all worried about in Benghazi. But once we prevented that and we could for a much smaller cost have sustained that protection of the eastern part of the country, I think going in, throwing out Gaddafi was a mistake.