Flynn’s Team Is Pulling On A Thread That Hopefully Will Unravel The Entire Deep State Sweater. 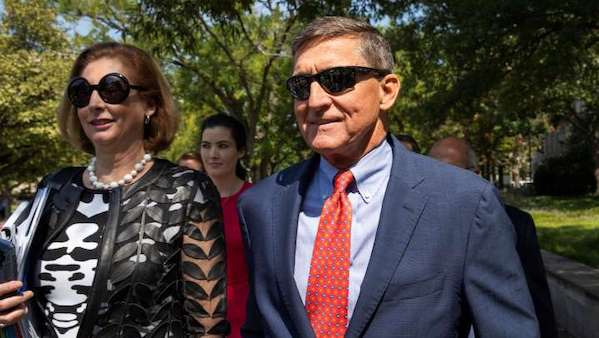 General Michael Flynn will likely go down in history as one of the first men to go up against the Deep State and win. And Flynn’s legal team is still leading the charge against them.

The former national security adviser was nabbed early in the Robert Mueller-led RussiaGate probe on charges of lying to the FBI.  Over the next several years, Flynn and his legal team attempted to prove his innocence against several crooked cops within the FBI and against a judge who seemed hellbent on putting the highly decorated military man behind bars.

It was only after a series of handwritten notes from the FBI were declassified that Flynn’s charges were dropped, as these notes indicated clearly that The Bureau had openly considered tricking Flynn into lying to them.  This would allow them to hold Flynn hostage, essentially.

And even though a federal appeals court ordered Judge Sullivan to dismiss the Michael Flynn case the work of his legal team is far from over.

Two recent events, tangentially related, likely were lost in the news cycle of the spike in COVID-19 cases and continued civil unrest in American cities. The first development was the U.S. Court of Appeals for the D.C. Circuit ordering Judge Emmet Sullivan to dispose of former national security adviser Michael Flynn’s case, followed by the disclosure of additional FBI notes related to the matter.

Flynn’s attorney, Sidney Powell, petitioned the court to order Sullivan to dismiss the appeals court case. Since both the prosecution and defense agree that the case should be dismissed, it had been in judicial limbo while the judge was deciding if he wanted to dismiss it or move forward with sentencing. This is the second federal court in less than a year to rebuke the FBI, with Judge Neomi Rao’s opinion noting the agency’s handling of cases related to the failed Russia collusion narrative. The Foreign Intelligence Surveillance Act (FISA) court also did so in December.

The second, and perhaps more significant, news was the revelation that additional evidence in the FBI’s possession was not previously turned over to Flynn or his attorneys. In a landmark case that is rapidly becoming known to many Americans, the Supreme Court held in Brady v. Maryland in 1963 that prosecutors must disclose the existence of exculpatory evidence to a defendant, regardless of how they obtained it or if it relates to their theory of prosecution. And therein lies a two-part problem with the recent disclosure of a handwritten note by fired deputy assistant FBI director Peter Strzok.

James Comey – then Director of the FBI – appears to be directly implicated as well.

So what is in the Strzok notes that might be problematic? First, Comey apparently advised the group that Flynn’s phone call with Russia’s former ambassador Sergey Kislyak “appears legit.” This is significant because it provides evidence that when Comey dispatched agents, including Strzok, 19 days later to interview Flynn, there apparently was not really a counterintelligence concern, which now appears to be the after-the-fact justification for the interview. Notes by former FBI Assistant Director Bill Priestap, disclosed earlier, appear to validate this as well.

What is also clear from the notes is that Joe Biden and Barack Obama participated in the “planning” of the Flynn interview, and it was Joe Biden who brought up the Logan Act.

But there is a lot more being hidden. According to Flynn Attorney Sidney Powell, ” that there was a whole lot of Brady evidence  (exculpatory evidence) at the government had produced clues to, but not the actual evidence of.” Judge Sullivan of course, didn’t care:

So I file a lengthy, I think it was probably, I don’t know, 45 or 50-page brief, asking and detailing all the Brady evidence that the government was hiding in this case, including DIA, Defense Intelligence Agency, briefings where General Flynn had told them about all his foreign contacts before he even made them. He told them about his trips to Russia and had them brief him on things they wanted him to collect for them while he was over there, and then reported back to them immediately. He briefed them on his Turkey contact. He pre-briefed everything he was doing religiously, and there was nothing secret at all. His company had even filed what’s called a Lobbying Disclosure Act formed to comply with the FARA registration requirements on advice of counsel, back when they first started doing anything related to Turkey. The whole thing was blown up from nothing.

Here I’ve been bragging on Judge Sullivan [because of the Ted Stevens case]. I filed this Brady motion that is as solid as it can be. The government replies, “there’s no Brady; there’s no Brady; there’s no Brady. He pled guilty; he pled guilty; he pled guilty,” which has nothing to do with it. Judge Sullivan’s Brady order requires the production of Brady even after somebody pled guilty, and a prosecutor’s Brady obligation continues even after conviction and sentencing. So that [argument] made no sense at all, and I thought surely Judge Sullivan of all people is going to give us at least the actual documents that the government itself has listed as having information that was favorable to the defense. I also thought he’d give me a security clearance to review any of the things that the government had deemed “classified,” which turned out to be, [as] we found [out] much later, evidence of their own guilt. That was a lot of what they had classified, and that’s what I expected to find.

But what I didn’t expect was for Judge Sullivan to deny every single Brady request we asked for in the document, every single one, in a 92-page decision that was just raging. I was flabbergasted. I had been convinced that he would do the right thing, and we would get Brady and once we got any Brady at all the case would start failing.

Much of it is still not released, but I am sure that Mr. Durham has gotten his hands on. Along with clearing General Flynn, it appears that the real value in this harrowing episode will come as Powell and her team, as well as John Durham, continue to expose the Deep State Barack Obama and Joe Biden for what they really are.