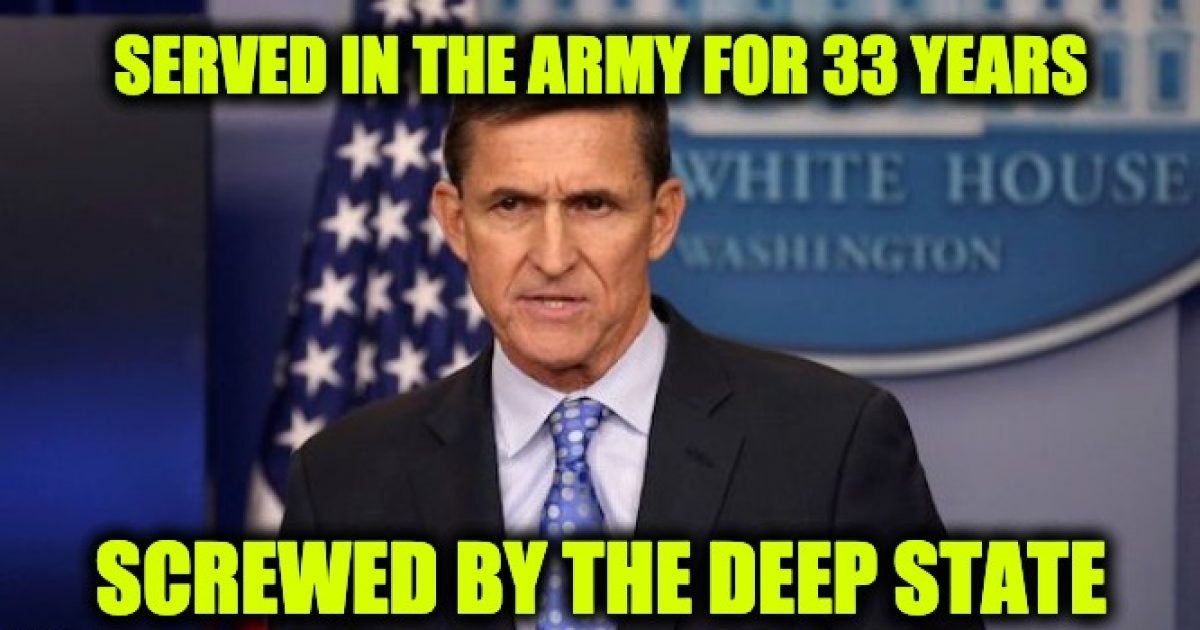 The DOJ attorneys prosecuting Michael Flynn sent a letter to Flynn’s attorney that the Flynn interview notes were ‘misidentified’ as being written by Peter Strzok.

The only serious response to this utterly bizarre disclosure is, “I can’t even.” Flynn Interview notes

Most readers are familiar with the basic facts of the Michael Flynn case.  The salient facts in this instance relate to the interview done with him by FBI agents Peter Strzok and Joe Pientka on 24 January 2017.  That interview became the basis for the single count of giving a false statement to which Flynn eventually pleaded in December 2017.

There has been widespread, justifiable criticism of the apparent methods and motives of the FBI in handling this interview.  It’s evident in hindsight that what the agents did was ambush Flynn, under the pretext of discussing counterintelligence security with him, and ask him a lot of questions to which the two agents already had institutional answers.  They had background investigations and monitored phone calls to rely on; their evident purpose was not to obtain information from Flynn but to lay a perjury trap for him by tripping him up on the details of previous events his memory might have been faulty on.

Their record of the interview indicated afterward that they saw no sign of deceptive intent in Flynn’s responses.  But differences between his recollections in the interview and the information Strzok and Pientka already had from other sources became the basis for holding a perjury charge over Flynn, and eventually threatening to bankrupt his son with a wire brush “investigation” as well.

The Flynn saga has been a long and tortuous one (no doubt torturous as well, for the Flynns); the purpose is not to rehash the entire thing here.  So fast-forward to Flynn switching counsel in June 2019: letting Covington Burling go and hiring Sidney Powell as his attorney.

The DOJ prosecution has been dragging its heels about tying off the Flynn case, seemingly with different purposes at different times.  Although Flynn took his plea nearly two years ago, he still has not been sentenced.  And in late August, Sidney Powell filed a motion to compel disclosure of what she and Flynn believe is Brady material held by the prosecutors, with follow-on filings to develop her argument.  The filing under seal was subsequently released to the public with minor redactions.

Most famously, she further filed a defense motion in October for information on two Blackberry phones used by Joseph Mifsud, and reportedly transferred from Italian authorities to John Durham, Attorney General Barr’s investigator for Spygate, in August or September of 2019.

But Powell is also looking for the original FD-302 records of interview for the 24 January 2017 encounter.  The reason for that request alone is a remarkable one: what’s been disclosed already from the interview materials showed significant discrepancies; appears to have at least one major piece of content in the formal 302 that is not supported by anything in the hand-written notes; and actually fails to support the false statement charge ultimately written up in the charging document.

Note: A FD-302 form is used by FBI agents to “report or summarize the interviews that they conduct” and contains information from the notes taken during the interview by the non-primary agent

That by itself is one heck of brief against the 302 material.  But as Powell laid out in filings in the last several weeks, it’s clear that there are yet-undisclosed original materials to which the defense is entitled because of these problems with the documents disclosed already.

At Conservative Treehouse, sundance has a good summary of the latest Powell filing, a “sur-surreply” on the Motion to Compel filed 4 November 2019.  As sundance says, it’s a ripping good read, and I recommend taking the time.  It’s not overly jargon-y.  (Sundance has a Scribd embed of it if you prefer that to the PDF at the last link.)

Twitter sleuth Undercover Huber (@JohnWHuber) did a superb treatment of his own – on 31 October, separately from Powell’s 4 November filing and using the documentation obtained under the Motion to Compel and subsequently released from under seal.  He comes off with the honors here.

In analyzing the discrepancies highlighted by Powell’s brief, he previewed for us the astonishing response the DOJ prosecutor filed on Tuesday.  See the whole thread.

One of the significant discrepancies called out by Powell is the incongruity of the hand-written notes by Strzok and Pientka, in light of the roles the Justice Department has stated they played in the interview.  It has been the prosecution’s claim that Strzok did the questioning and Pientka the note-taking, and that Pientka was primarily responsible for writing the interview summary up.

That claim was made to the court more than 18 months ago.  What Powell pointed out in her 4 November 2019 filing is that the notes attributed to Strzok simply don’t look like something hand-written during the interview by the agent whose main attention was on speaking with the subject.  Pientka’s notes, by contrast, do look like those of a primary interviewer.

Peter Strzoks notes were far too neat, organized and well constructed to have been written during an actual interview.

Check out the screencaps Undercover Huber has in his tweet thread, and I think you’ll agree.

Hilariously, Undercover Huber suggested before the prosecution’s response to the Flynn sur-surreply (and before Powell filed the sur-surreply) that one of the options the prosecution would have, to explain why the notes didn’t look right, would be claiming the authorship of the notes was indicated backward.  The notes labeled Pientka’s were actually Strzok’s, and vice versa.

I saved his tweet thread at the time, frankly assuming that another option was much more likely.

But incredibly, in the response filed by prosecutor Brandon Van Grack, the claim is that the authorship of the hand-written notes was mixed up in the original court filing, and had never been caught until Sidney Powell filed a persuasive brief about it on 4 November 2019.

I don’t know how many times the two agents have testified on the extraordinarily high-profile Flynn matter since then.  Peter Strzok, of course, has testified to Congress (e.g., here and here).  Pientka never went before Congress; he was on Mueller’s special counsel team.  Congress has requested the 302 and supporting documents; some of the material has been released to the public.  Meanwhile, the court has been relying on 302 interview material, the agents, and their chain of command certified. Still, yet the prosecutor is now claiming it was filed with the court incorrectly – and apparently certified by the agents and their superiors, although it was labeled incorrectly –  from the outset.

Facts material to the case depends on who actually contributed what to the 24 January 2017 interview, as Powell observes in her 4 November filing.  A nicely accessible discussion of that point is found in this thread by Roscoe B. Davis (@RoscoeBDavis1).

The headshot about the notes that the they do not support the charges nor do they support the mantra of why they were there questioning Gen Flynn in the first place. They tried to force feed the collusion innuendo into the conversation, but never asked about it. pic.twitter.com/WkLLoamVKR

So this is not something that will reconstitute itself easily.  Strzok and Pientka can’t just be swapped out as hand-written note-takers without throwing the entire basis of the case in doubt.  (This relates, to some extent, to the point that content in the formalized 302 is not supported by anything in the hand-written notes.  Who was adding what to the formal 302, during the process of finalizing it and entering it into evidence, is very much at issue.)

It seems Flynn and his counsel must unquestionably be given every single scrap of memorial material from the 24 January 2017 interview.  On the other hand, if I were Judge Emmett Sullivan, I’d be looking seriously at throwing this case out, and reprimanding the prosecution severely for putting the defendant, the court, and the taxpayers through this utter travesty of a proceeding.  Looking into prosecutorial misconduct wouldn’t seem to be out of line. 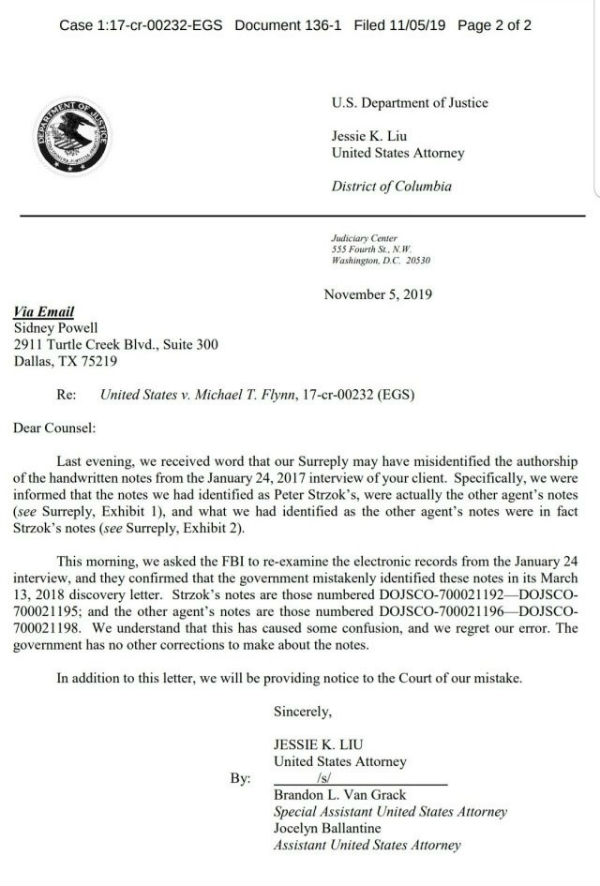