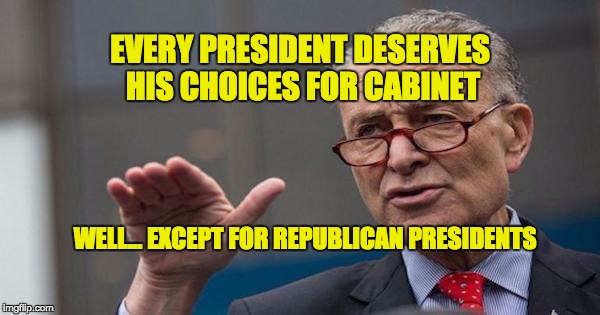 Senate Minority  Leader Chuck Schumer has been slow-walking the confirmation of Donald Trump’s Cabinet. Yet in 2013 he justified Harry Reid’s elimination of the filibuster for presidential appointments (except the Supreme Court) by saying ” Just about everyone in America, Democrat, Republican, liberal, conservative, believe that once you elect a president he deserves his choices to run the executive branch.”

Perhaps the reason Schumer said, “just about everybody,” instead of simply “everybody,” is that he doesn’t believe what he said in 2013 that the president deserves his choices.

Well either that or he had a beef with the Capital Police and wanted them to work all night. Or maybe he simply wanted the senate to have the opportunity to tell Elizabeth Warren to shut up and sit down as they did last night (many people would pay to see that but it’s embedded below for free).

With yesterday’s confirmation of Betsy DeVos as Secretary of Education, just five of Trump’s 15 nominees have been confirmed.

At the same point of time in their presidencies:

This is the longest it has taken to confirm a majority of the President’s Cabinet after he was inaugurated since President George Washington set-up the government of the United States in 1789.

If there is some sort of recognition for placing obstacles in front of a presidency by not allowing a new administration to have a cabinet to run the various departments of the executive branch, Senator Schumer would be in the Hall of Fame. But the Schumer of 2013 would criticize the Schumer of 2017. Just look at what he said back then:

The majority leader has just announced he’s moving forward with a group of nominees to give the president the team he deserves to fight for the middle class. Just about everyone in America, Democrat, Republican, liberal, conservative, believe that once you elect a president he deserves his choices to run the executive branch. But a new tactic has it been introduced try to paralyze the executive branch the way they paralyze the legislative branches because they really don’t want the government to function.

That is exactly what Chuck Schumer is doing now because he doesn’t really want the government to function.