Flashback: When President Obama Had To Fire National Intelligence Board Chair, Chas Freeman 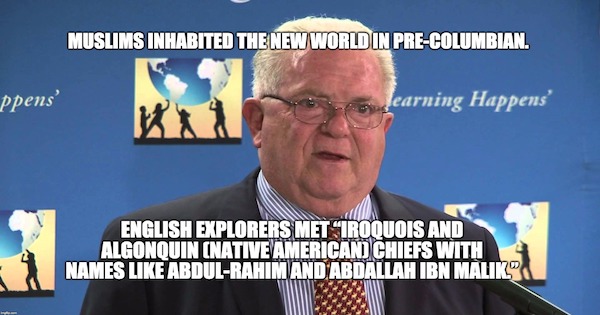 The firing of General Flynn is not as unusual as the media claims. What’s different is the way the mainstream media treated the firing. In March 2009, only six weeks into his presidency Barack Obama was forced to ask for the resignation of his National Intelligence Board Chair Chas Freeman. Interestingly after Freeman was forced out the press didn’t start asking why Freeman wasn’t properly vetted, nor did they suggest the Obama administration was in disarray the way they did when Gen. Flynn was forced out.

Largely through the efforts of this and other bloggers, through a series of posts here, at Breitbart,  and an op-ed in the Washington Times, Freeman was exposed as a tool of Saudi Arabia and China who said the Native American tribes the early explorers met were actually Muslims, and described China’s massacre of the Tiananmen Square protesters as too cautious:

In this optic, the Politburo’s response to the mob scene at “Tian’anmen” stands as a monument to overly cautious behavior on the part of the leadership, not as an example of rash action

Freeman also had a nasty habit of promoting the anti-Semitic stereotype about the Jews (he called them the Israel Lobby) controlling U.S. foreign policy.  In the end it was the Tiananmen Square statement that sealed his fate (Pelosi has Chinese American constituents and she urged the POTUS to kick Freeman to the curb.

The below is a post that appeared here on March 6, 2009 just before Mr. Freeman was asked to resign.  Oh and one other thing, despite the threats, Chas Freeman’s son didn’t really want to punch me in the nose.

The Argument Against Chas Freeman

The Obama administration’s choice for the usually obscure, though important, post as chairman of the National Intelligence Board (NIC) has become their most controversial appointment to date. The reason is not what Charles Freeman Jr. did during his successful diplomatic career but his employment afterward.

Freeman’s two key post-government activities involved being, to a considerable degree, a de facto employee of Saudi Arabia and an apparent panderer to its demands. In exchange, he received lavish support for the research center he headed and lucrative contracts for the consulting firm that he founded to guide international companies into finding royal family connected partners within the Saudi elite. This raises the reasonable question as to whether Ambassador Freeman acted as an unregistered Saudi agent. And even if that is beyond what he did, shouldn’t his proximity to that role raise questions about his being named chief U.S. intelligence analyst on matters that will clearly involve Saudi views and interests?
While many former diplomats, especially ex-Saudi ambassadors, are not known for being big fans of Israel, Freeman presided over a center and publication whose hostility to Israel is beyond the broadest mainstream of U.S. thinking on the region. In addition, his slavish following of the Saudi “party line” has involved Freeman in some embarrassing situations.
For example the Middle East Policy Center (MEPC), run by Ambassador Freeman (with major funding from the Saudi royal family) publishes a notebook for American teachers called “Arab World Studies Notebook.” This notebook includes historical inaccuracies such as; Muslims inhabited the New World in pre-Columbian.  English explorers met “Iroquois and Algonquin (Native American) chiefs with names like Abdul-Rahim and Abdallah Ibn Malik.”
There is no evidence of this claim in the historical record. The first Muslim to enter the historical record in North America was Estevánico of Azamor, who came with the Spanish in 1539. Islam is not believed to have taken root in Canada until the mid-19th century.
Another project of the Chas Freeman run MEPC is the quarterly magazine, Mid East Policy. The Journal’s editorial pages are filled with anti-Israel messages that are so disturbingly radical, they could have been written by the group’s Saudi benefactors. Claims such as the Iraq war was waged for the U.S. on behalf of Israel (Editor’s Note Fall 2008 Issue) or “We [United States] still allow Israel to call the shots. Which includes a strategy of “buying off Fatah and starving Hamas is an Israeli plan that Washington has had to accept” (Editor’s Note Fall 2007 Issue)
This is not to say that Freeman holds the views of the publications he published; we cannot look into his mind. For all we know he may regularly give money to the JNF for planting new trees in Israel. It is his willingness to push positions contrary to mainstream thinking, and likely U.S. national interests for financial reward that is troubling.
The Chairman of the National Intelligence Council is like the editor of a journal. He must review edit, add context to and decide what to present in terms of good intelligence. The issue isn’t that Freeman may skew reports because of some anti-Israel bias, we cannot judge that, but what should be considered is that his judgment may be tainted because of a desire to stay in the good graces of the House of Saud for his post-NIC career. As long as we are fighting a global war on Islamic Terrorism, Freeman’s judgment as a de facto employee of the Saudi Government should be troubling for the citizens and supporters of the United States.
Freeman’s troubling connections are now greater than originally thought. Investigative reporter Aaron Klein of WND  has discovered that Chas Freeman is on the board of Chinese Oil Company, a major oil company owned by the Chinese government that is in the midst of a multibillion dollar Iranian oil deal with which may be a violation of U.S. sanctions against doing business with Iran.
Freeman should also be troubling for the Obama administration. The new president has pledged to run a transparent operation. The job for which Freeman is nominated is not one that the Senate must confirm. Neither is it one that the President has to “own” as the appointment came not from the Oval Office but from Dennis Blair, the director of national intelligence, who is a personal friend of the former Ambassador. In fact the White House did not even get the opportunity to review the Freeman appointment before it was announced.
Already there are members of Congress from the President’s own party concerned about the appointment.  [After sending them documentation from this site] Last week, Chuck Schumer called Rahm Emanuel regarding the appointment, and Steve Israel (D-NY), asked the inspector general for the Office of the Director of National Intelligence to look into the Saudi funding of the MEPC.  Perhaps, for its own good the White House should ask those same tough questions and think about whether the appointment of Chas Freeman suits WH interests, and that of the country.