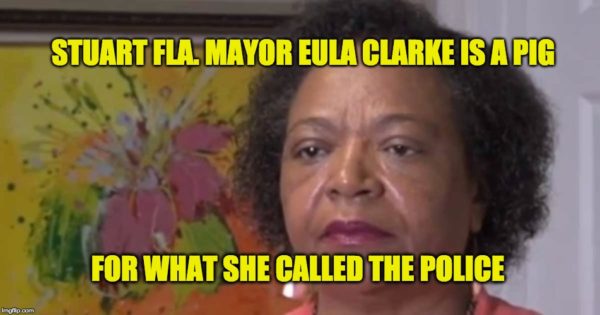 Mayor Eula Clarke, a mayor in Florida has angered residents in the south Florida town of Stuart when she insulted a police officer who serves and protects in their own town.

Stuart Mayor Eula Clarke, while inside of a grocery store reportedly said, “What are we serving, pig today?” when she entered the store and saw a police officer.

After the Palm Beach County Police Benevolent Association got involved, she issued an apology in what she called an “unfortunate incident.”

According to John Kazanjian, the president of the local Police Benevolent Association, a Stuart police officer was inside Taylor’s grocery store on January 11th when the Mayor, Eula Clarke walked in.  The officer then left the store, very upset by the verbal insult made by the mayor of the town he was hired to protect.

Clarke has since come under sharp scrutiny for the incident.  She embarrassingly tried to avoid questions on whether it actually happened during a recent interview with WPTV.

When a local reporter tried to interview Clarke about the incident, she begun by trying to skirt the details.  “So what happened on January the 11 involving a Stuart police officer?,” he asked.

“Andrew, I told you I want to make a short statement to the public,” she said.

“Again, I’m telling you that I support law enforcement,” she replied.  She scrambled to dodge the direct questions but later backtracked and said, “It happened. That was something that happened. It’s done with. I want to move on. I want the officers to work for our community. I want them to believe in what I do as mayor. To believe in what they do for their jobs. I just want to make sure that they know I have their backs,” she said.

Clarke continued to say that she had met with the officer and “expressed to him how sorry it is that this unfortunate event happened.”

[note from Jeff: Unfortunate my arse! She knew exactly what she was saying and she was disparaging the people who protect her and the citizens of her city.]

As reported near the end of 2016, fatal shootings of police officers were up more than 50 percent from the previous year.

Also back in December 2016, black police officer Jay Stalien stated, “But the communities wracked with internecine violence did not want to cooperate with law enforcement. I remember the countless times I canvassed the area afterwards, and asked everyone ‘did you see who did it,’ and the popular response from the very same family members was always, ‘F*ck the Police, I ain’t no snitch, I’m gonna take care of this myself.’ This happened every single time, every single homicide, black on black, and then my realization became clearer.”

Stalien stated that some of the complaints as to why they hated cops included, “Police always targeting us, they always messing with the black man.”

As for Stuart Mayor Eula Clarke, her comment may make matters worse and citizens of Stuart have hinted they want her to resign and the resignation may be forth-coming.