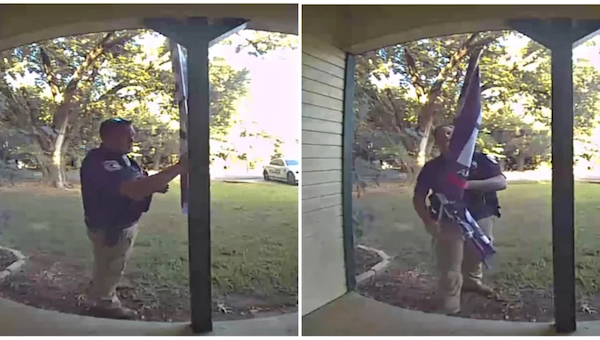 It seems that Americans no longer have First Amendment free speech rights under the Regime of Dementia Joe Biden. On Saturday, it was reported that the police in Pottsboro, Texas removed a man’s “f**k Joe Biden” flag from his house while he was gone.

Michael Prather, the victim, in this case, uploaded a video of the incident to his TikTok account, Hoft reported.

“Pottsboro, TX PD coming to my house [to] take my flag down while my family and I are gone,” Prather wrote. “I’m tired of this! Pottsboro PD only wants to do things to a few but not others. I need help!!”

Mr. Prather addressed the situation on his TikTok through a series of videos, claiming that the mayor of Pottsboro, as well as other neighbors, have made complaints about the flag.

“I have PTSD. I have depression and everything. So he [Pottsboro mayor] has to drop by my house every day to get to the city hall. And my source is saying that he is a registered Republican, but in all reality, he’s a liberal. Just like the other person that is just north of him is a liberal.” Prather said.

“And my recent source is saying that there’s a complaint. They’re crying about it [and] they don’t like it. I say f*ck them. You don’t like it? Kiss my as*,” Prather added.

In another video, Prather shared that he had been approached once before by the same officer in the video to take the flag down because of profanity.

Prather reportedly told police he had a right under the First Amendment to fly the flag, despite the profanity. But, he said, the Chief of Police threatened to cite him for disorderly conduct, a class C misdemeanor in Texas.

The Pottsboro resident said he has reached out to several attorneys, but no one appears willing to take his case.

“I’m not begging for money or anything, but I’m not really broke. We’re not really broke… But we are not financially stable to actually hire an attorney because most attorneys want money upfront and money upfront is what we don’t f*cking have. But I’m willing to, like I said in the last video, willing to talk to the police if they actually come to my door,” Prather said.

The short 33-second video can be seen below:

Welcome to Biden’s “Amerika,” where freedom is a thing of the past.