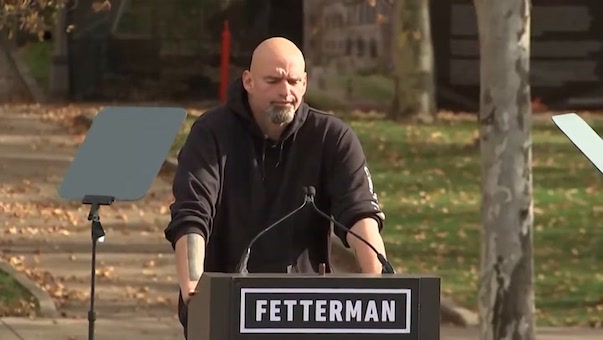 As John Fetterman bragged that he would be standing with “100% sedition-free” Barack Obama on stage, a gust of wind blew over all six American flags positioned behind him. Many Republicans stated that it was a “sign” – that Fetterman was bound for defeat or that America was if Fetterman was elected. Either way, as Republicans noted, it was the “perfect metaphor.”

As Pennsylvania Democrat Senate candidate John Fetterman talked about how proud he was of “sedition free” President Biden, the flags on the stage were blown over. pic.twitter.com/d0idqQod4G

Someone up there doesn’t like it when Fetterman tells lies. https://t.co/l7dBqZ2ylJ

A perfect metaphor for Democrats’ control of Congress.https://t.co/Y570e9Q2N5

John Fetterman’s campaign has suffered from severe issues of fitness for office after his stroke earlier this year. But the main problems are his radical policies. In the name of “reforming the criminal justice system,” he believes in giving convicted felons and others a “second chance.”  He has two convicted felons on his campaign team. There are ten convicted murderers that he helped release, according to Fox.

Fetterman, who chairs the Pennsylvania Board of Pardons, often talks about wanting to put an end to state law that requires mandatory life sentences without parole for those convicted of second-degree murder, but his voting record on the board shows he has successfully supported the release of at least 10 people who were convicted of taking a life. Fox

As the current Lt Governor of Pennsylvania, he enjoys the perks of being an incumbent, even though he lived in the basement at his parent’s home on a 5 figure allowance from his wealthy parents until he was 49. Most of that was during his tenure as Mayor of Braddock, PA. The “blue-collar tough guy” isn’t what he purports to be – he comes from a wealthy family.

The fact that as Fetterman bragged about standing next to Barack Obama and all six flags positioned behind him fell at that moment may be a “sign” that everyone in Pennsylvania should think about before voting for him.