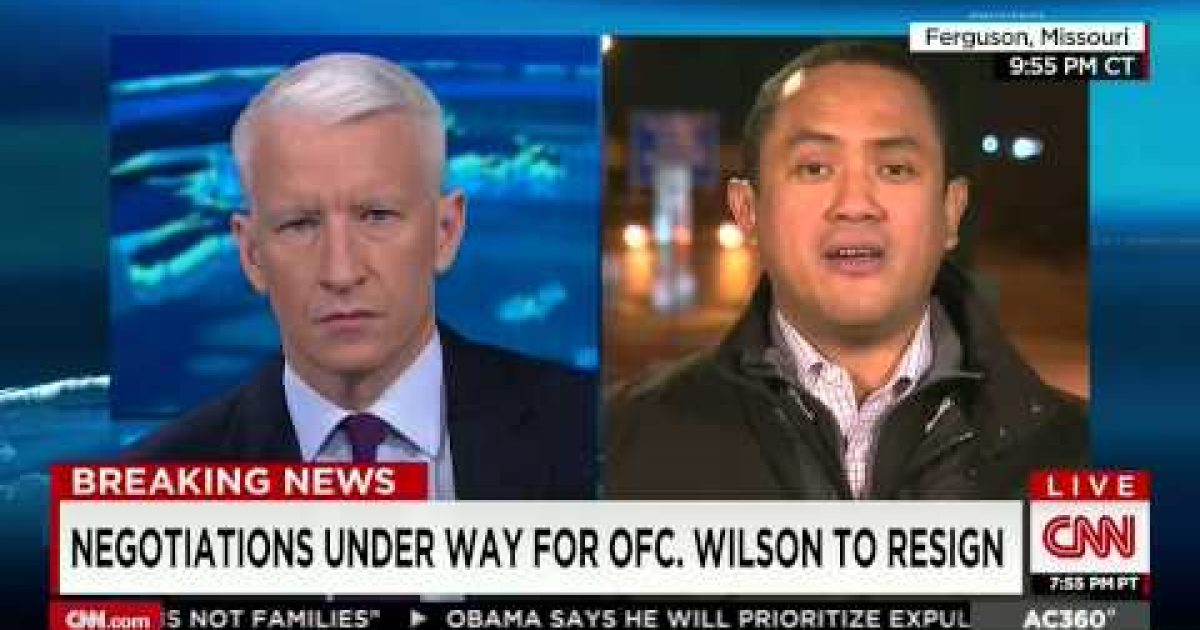 CNN is reporting tonight that Darren Wilson, the officer who shot and killed Michael Brown in August, is negotiating his resignation from the Ferguson police force. Seemingly it depends on what comes out of the grand jury. If they do not indict him he is more likely to resign as a way to help his fellow officers.

A transcript and video of the report follows below:

Anderson Cooper: Breaking news from Ferguson, Missouri in the case that led to the death of a teenager. An outcry on the streets, grand jury proceedings, expected to wrap up as soon as tomorrow deciding whether officer Darren Wilson should be charged in the death of Michael brown. Regardless of what the grand jury decide. Darren Wilson may not be returning to the police force. Negotiations are underway for Darren Wilson to resign. Our justice correspondent, Evan Perez, joins us with the latest. You are hearing this from your sources what are they saying?


Evan Perez: That’s right. That’s right. Anderson. We are hearing from sources that Darren Wilson is in the final stages of negotiations under which he would resign. Now, you know he wants to make clear he told people close to him that, you know he wants to make clear he its not admitting fault for anything. He doesn’t believe he has done anything wrong, but he is doing this mostly because he feels it would be good not only for the community but also for his fellow officers. Andersen.

Anderson Cooper:  There had been a report, based on what the Ferguson police said, he would return to duty if the grand jury did not choose to indict him. That I think surprised a lot of people. In a relatively small community. Relatively small police force like Fergusons, the idea that he would return to the force, whatever side of this you are on, in that community. Would probably raise a lot of, a lot of — consternation

Evan Perez: Absolutely. I will tell you this, when Ferguson police chief, Tom Jackson said that in a couple of media interviews. There was a lot of pushback. A lot of people thought this is not helpful. Frankly, inflammatory for him to be saying that. These talks have been under way in the final stages. One concern Darren Wilson had. The grand jury has still been hearing evidence. He did not want to influence the grand jury, he wanted to make sure that, that, you know they didn’t hear that he was resigning. And then that way, perhaps, read into that, that he was admitting any fault. That has been the linchpin in the negotiations.

Anderson Cooper:  Are the negotiations based on the idea that, Darren Wilson may not get indicted if he did get indicted would that affect the decision whether or not he would resign from the force?

Evan Perez: Quite possibly. You are right. These negotiations are hinging on that. The expectation that they have, obviously if he gets indicted. Then he is in for a, a tougher fight, right. This could be off the table. So the fact that all the talks have been going back and forth for the past few weeks tells you this has been very sensitive. He could yet change his mind. But we are told these are now in the final stages. That his plan is to resign. As a way to help his fellow officers kind of move on. And help, heal the community here.