Is He Channeling Gerald Ford? 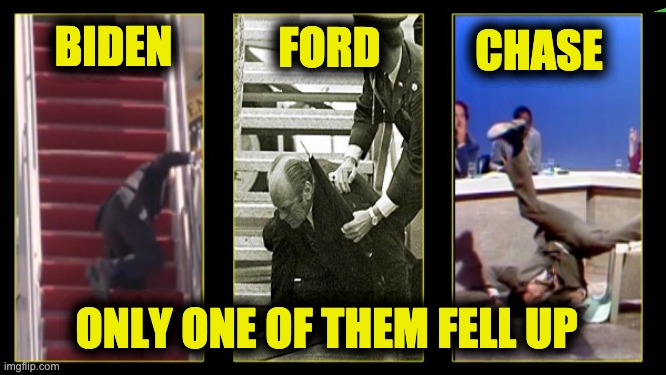 President Biden stumbled three times while climbing the stairs to board Air Force One.  Forty-five years ago, President Gerald Ford fell coming down those stairs.  But Ford was just clumsy, holding an umbrella, and fell down. Where’s Chevy Chase now that we need him? Biden falls up stairs

Biden, on the other hand, is feeble and fell up. Who falls UP the stairs?

The 78-year-old commander-in-chief had his hand on the railing when he tripped twice before falling over the third time as he flew up the stairs of the idling aircraft at Joint Base Andrews.

After recovering, Biden appeared to take a moment to dust off his knee before finally making his way to the top. He then gave a salute before ducking into the cabin to take off for Georgia.

White House comms director Kate Bedingfield assured everyone that Biden was okay (I wonder if Kamala Harris was upset when hearing Bedingfield’s news,

I know folks have seen that President Biden slipped on his way up the stairs to AF1, but I’m happy to report that he is just fine and did not even require any attention from the medical team who travels with him.  Nothing more than a misstep on the stairs.

Now that he’s in the White House, Biden’s health has again become a concern for many.  His mental state is the subject of great debate among political observers, including this one, who believe he is suffering from the early stages of dementia. Physically he looks feeble and has already injured himself earlier this year, breaking bones in his foot.  To be honest, his growing mental feebleness is more concerning than his physical issues.

The news, even the MSM will probably show the falls, but won’t use the incident to raise questions about Biden. After all, he is still their hero for beating the orange man.

Will late-night comedy cover the pratfalls? The fall going up the stairs seems custom-made for comedy.

After President Ford fell, he became a constant target of Chevy Chase on Saturday Night Live.

Will SNL use President Biden’s fall as fodder for comedy routines? I doubt it, but based on their recent history, they will probably find a way to blame President Trump if they do use it.