Missile tests, more arrested Americans, an up-tic of cyber warfare, and changing what was agreed to in the JCOPA/P5+1 deal—those are only a few examples of the rogue Iranian regime has been doing since they agreed to the P5+1 deal also known as Obama’s crap sandwich. How has Obama reacted? Well, he’s reacted according to his foreign policy philosophy, which Obama borrowed (and misread) from Teddy Roosevelt. His version is, “Speak Softly and Carry a Tiny Toothpick.”

As reported by the Iranian Press TV:

The reference is to statements issued last Friday by among others Sen. Kirk. After news of the arrest of American Siamak Namazi by the Iranians, Kirk’s  office sent a press release to journalists urging the Obama administration to “work with Congress to enact stronger measures to push back, including renewal of the expiring Iran Sanctions Act [ISA] of 1996 and targeted sanctions against Iran’s Revolutionary Guard (IRGC)  and against any Iranian official found to have participated in the unjust detainment of American citizens.”

The Siamak Namazi arrest was preceded by an uptick in Iranian sanctions violations: a ballistic missile test, joint military operations with Russia in Syria, open violations of international travel bans, etc. As reported in Thursday’s Wall Street Journal,  the arrest was followed by a spike in anti-U.S. activity: a cyber attack against U.S. officials launched from Namazi’s laptop, the arrest of U.S. resident Nizar Zakka, yesterday’s nationwide Death to America celebrations, etc. The Obama administration is now facing domestic pressure to respond to the anti-American gambits and demands from Iran to stand down:

“The arrests… have sparked new criticisms from Congress of the nuclear accord. Some lawmakers have called for the White House to ramp up sanctions on the IRGC, a move that Mr. Khamenei has said would violate the nuclear deal”

Skeptics of the White House’s Iran diplomacy predicted that the Joint Comprehensive Plan of Action (JCPOA is the formal name of the P5+1 deal) would inhibit the U.S. from responding to Iranian provocations.

And don’t for get the agreement directly boosts Iran’s conventional military and terror infrastructure (including propping up Syria’s Assad). The deal provides Iran with a windfall in excess of $100 billion, at a time when the Iranians are financially and militarily overstretched.

Obama Administration officials have conceded that a significant amount of the relief will go into financing terrorism,  diplomatic and military analysts have explained that just 10% of the windfall would be sufficient to swing some of Iran’s conflicts. The nuclear deal also lifts sanctions against top Iranian terrorists and IRGC officials, including IRGC chief Qassem Soleimani  who recently visited Russia in violation of the deal. It also lifts restrictions on Iran’s military hardware: U.S. diplomats accepted Tehran’s interpretation of United Nations Security Council resolution (UNSCR) 1929 and agreed to lift the U.N.-imposed embargoes on conventional and ballistic missiles in 5 and 8 years respectively, a decision that wasn’t justified by the plain text of the UNSCR and which Gen. Dempsey and Defense Secretary Carter had warned against. Iranian FM Zarif has bragged that even the remaining restrictions have been rewritten to be “non-binding”  The combination – gifting Iran with financial capital while lifting restrictions on its activities – has been criticized as “the Obama White House… funding and arming” Iran.

White House officials nonetheless declared throughout the JCPOA debate that, once the nuclear issue was off the table, Washington would be free to “down” and “push back” against Iran’s expansionism, terrorism, human rights atrocities, and so on. The claim was a core assurance provided to lawmakers, and it gave them cover to endorse the deal. But like most of the promises coming out of the Obama administration, these pledges were less than worthless.

But now White House is now facing pressure to fulfill those assurances. The Kirk press release laid out a menu of policy options with several tiers of targets and actions: targeting Iran’s broad military and terror infrastructure by renewing ISA, targeting just the IRGC by designating the organization, or targeting just the personnel within the IRGC “found to have participated in the unjust detainment of American citizens” via a range of mechanisms. The administration has already balked at the two broader options – ISA renewal and organization-wide IRGC sanctions – and is claiming that the Iranians would reject them as violations of the deal, a stance that is in tension with the summer campaign promising “push back” and “doubling down.”

Administration officials have not yet taken a public stance on the possibility of sanctioning just the individuals involved in detaining Siamak Namazi. According to reports in the media, the IRGC intelligence unit that arrested him is reportedly known. Designating the personnel in that unit would quite literally be the least the Obama administration can do (but they have a history of doing less than the least in their foreign policy). There are no policy options for pushback that are more limited in scope. If the administration now claims that even those measures would endanger the P5+1 crap sandwich it will reinforce concerns that Obama’s legacy deal really took all of the U.S.’s options for opposing Iranian aggression.

THE FUTURE OF AMERICA ACCORDING to MADAME NOSTRADAMIA
The Black Sphere 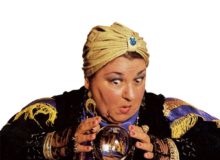