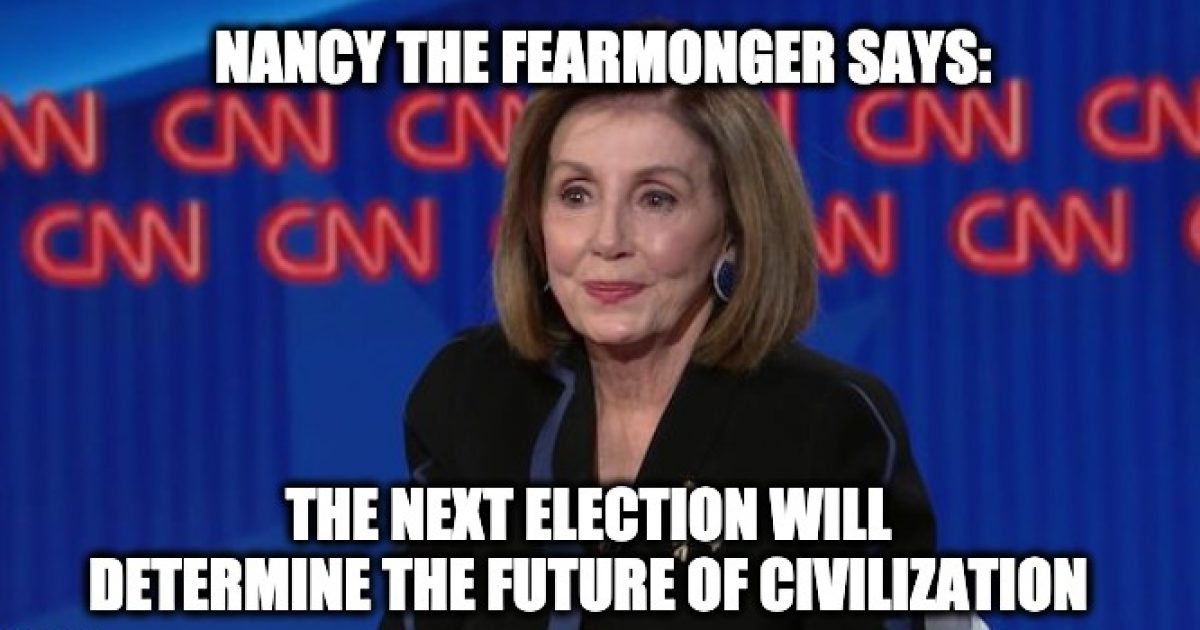 While participating in a town hall held by fake news CNN, House Speaker and fearmonger Nancy Pelosi seemed to justify the sham impeachment coup by claiming that civilization and the entire planet is at stake in the next election.

“[T]he damage that this administration has done to America, America’s a great country. We can sustain. Two terms, I don’t know,” she said when one person asked what checks would be in place during a second Trump administration, a rather stupid question that presumes the Constitution will somehow vanish if Trump is re-elected.

Impeachment is ENTIRLY POLITICAL for Democrats.

We [Democrats] don’t agonize we organize and we do so in a way that again is unifying for a country it is absolutely imperative civilization as we know it today is at stake in the next election and certainly our planet.

It’s surprising that hyperbolic nancy didn’t quote Ghostbusters, and say that if we reelect Trump we will have “a disaster of biblical proportions real wrath of God type stuff. Fire and brimstone coming down from the skies! Rivers and seas boiling! Forty years of darkness! Earthquakes, volcanoes, the dead rising from the grave! Human sacrifice, dog, and cats living together–mass hysteria”

But in a way, I agree with Pelosi. There is a lot at stake in 2020. If Trump loses and the Democrats move into the Oval Office, we are all screwed.

It is clear the only reason Democrats are pushing impeachment is that they hate Trump, and they hate those who voted for him, as Rush Limbaugh noted.

The Democrats know that none of their candidates can beat Trump in 2020. They also get all the great economic news. The great news is the November unemployment rate; 3.5%, a 50-year low.

Rather than taking on the impossible task of trying to convince America that their economic plans are better than Trump’s,” they are trying to get rid of him illegitimately. Face it.  This is nothing less than a coup d’etat against a legally elected president.  And the Democrats need to pay a heavy price for this outrage.

Pelosi knows what’s going on. She knows how this witch hunt is hurting her party and may lead to them losing their house majority. But Nancy Pelosi also understands that if she stops the process the caucus will revolt against her.  She doesn’t care about losing the majority as long as she retains the leadership of the House Democratic caucus.

But before you go, watch the video of Fearmonger Nancy Pelosi  spewing her nonsense below: