FDR Was NOT A Hero: He Was A BIGOT 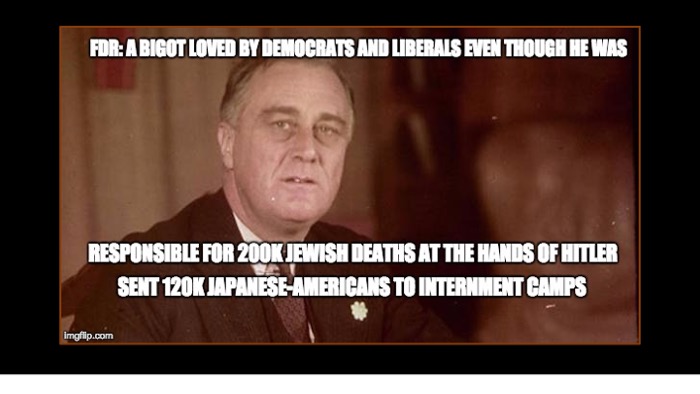 Typically, when one asks a Democrat about FDR they immediately develop a sense of awe that reminds me of those little green aliens (undocumented space men?) in Toy Story every time they see Buzz Lightyear.” AHHHHH!”

I’ve never understood the reverence for Franklin Delano Roosevelt. He gets points for picking great Generals and led this country to victory in WWII. But he totally mismanaged the economy, during the recession of 1937 unemployment reached 19% (the great depression high was 25%), his freedom-sapping policies never did get this country out of the Great Depression, and don’t forget that he tried to circumvent constitutional separation of powers (now who does that remind me of?). And then there is the issue never discussed, he was a bigot, his hatred of Jews caused thousands to be added to the ranks of Hitler’s victims, and his hatred of asians convinced him to put Japanese Americans into internment camps.

Some point to the fact he didn’t he bomb and destroy the train tracks that were shipping Jews to the concentration camps? But my opinion sides with the people who say that wouldn’t have worked. The real question to be explored was why didn’t allow more Jews into the country and why didn’t he pressure Britain to allow Jews to move from Nazi controlled areas into what was then called Palestine?

In the book “FDR and the Holocaust: A Breach of Faith,” historian Rafael Medoff suggests that Roosevelt failed to take relatively simple measures that would have saved significant numbers of Jews during the Holocaust, because his vision for America was one that had a small number of Jews. In other words, FDR doomed many Jew to suffer not because he wanted them to die, but because he didn’t want a lot of them living in his neighborhood.

In 1936, he characterized a tax maneuver by the publisher of the New York Times as “a dirty Jewish trick.” In 1938, FDR privately suggested to Rabbi Stephen S. Wise, the era’s most prominent American Jewish leader, that Jews in Poland were dominating the economy and were to blame for provoking antisemitism there.  In 1939, Roosevelt expressed (to a U.S. senator) his pride that “there is no Jewish blood in our veins.”  In 1940, he dismissed pleas for Jewish refugees as “Jewish wailing” and “sob stuff.” In 1941, President Roosevelt remarked at a cabinet meeting that there were too many Jews among federal employees in Oregon.

Perhaps his distaste for Jews was the reason, that while there were many actions FDR could have taken to stop or slow down the Holocaust, he didn’t. “He could have quietly permitted the immigration quotas to be filled to their legal limit — that alone would have saved 190,000 lives,” Medoff said.

On Roosevelt’s most blatant acts of bigotry involved the St. Louis whose story was recently told by Pamela Adams at Constitution.com

And it wasn’t just the Jews. One of the stains on American history was the fact that Roosevelt rounded up Americans of Japanese descent and threw them into camps and if you think he placed them in camps because of some distorted vision of protecting the country, you are wrong. FDR didn’t like Asians either.

Roosevelt wrote in a 1925 column for the Macon Daily Telegraph, “Anyone who has traveled in the Far East knows that the mingling of Asiatic blood with European or American blood produces, in nine cases out of ten, the most unfortunate results.” He continued, “Japanese immigrants are not capable of assimilation into the American population.

Today liberals like to scream that anyone who does not support amnesty for illegal immigrants is a racist. And people who want to delay the settlement of the Syrian refugees in this country are Islamophobes, even though CIA Director Brennan said during congressional testimony that refugee flows is one the ways terrorists infiltrate western nations.But the liberals forget the bigotry of their hero FDR, caused approximately 200K extra Jews die in the Holocaust, and placed about 120K Japanese Americans into internment camps.  Now THAT was real prejudice.