The First Amendment Itself Is At Stake Here 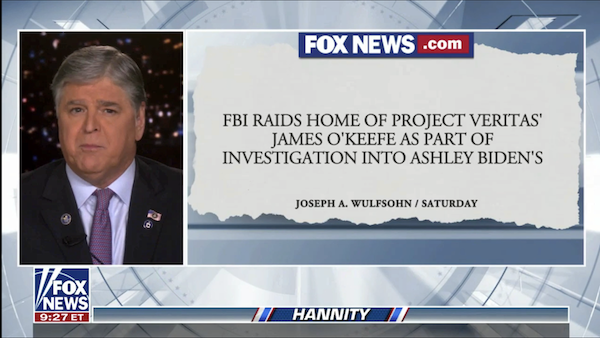 You know that things are heading downhill fast for the Biden administration when the FBI is forced to raid the homes and offices connected to investigative journalists. FBI’s Raid on Project Veritas

In this latest affront to the First Amendment, the Bureau took aim at Project Veritas – a provocative news outlet that just happens to lean to the right – and its founder, James O’Keefe, with both suffering raids of their homes after a story emerged regarding their potential possession of a “diary” that once belonged to one of the Biden children.

Now, in what appears to be an attempt to keep this whole debacle as quiet as possible, a federal judge is refusing to let materials related to the case be seen by the public.

A federal magistrate judge in Manhattan has turned down a bid by a journalism advocacy group to make public details about the legal basis for an FBI raid last month on the home of a conservative activist and hidden-camera video producer.

The FBI seized cellphones in the early-morning, Nov. 6 raid on the apartment of Project Veritas founder James O’Keefe in Mamaroneck., N.Y., as part of an investigation that appears to center on the alleged theft of a diary belonging to President Joe Biden’s daughter, Ashley Biden.

The use of a search warrant to seize O’Keefe’s records raised the hackles of some First Amendment advocates, who said O’Keefe’s activities likely qualify for protection for members of the news media under federal law and Justice Department regulations. O’Keefe’s critics say his deceptive tactics and evident partisan bias disqualify him from any claim to being a journalist.

The entire fiasco appears to be turning muddy in recent weeks.

In the 19-page ruling, the magistrate judge referred to O’Keefe as one of the “subjects” of the investigation. Federal prosecutors use that term to describe someone whose activities are being actively examined by the investigation but who is not currently seen as likely to be charged.

If Cave intended to use the term in that sense, it would raise further questions about the raid on O’Keefe’s home, since prosecutors are not typically permitted to use search or seizure warrants to get unpublished media materials about crimes allegedly committed by others.

O’Keefe’s attorney has said that the conservative provocateur bought the “rights” to publish the diary from two individuals who claimed to have obtained it legally. O’Keefe said the people who turned over the diary found it abandoned in a room where Ashley Biden had been staying.

Project Veritas’ First Amendment rights are very much a central issue in this case, and allowing the US government to decide which journalists qualify for these protections is a slippery slope to authoritarianism.