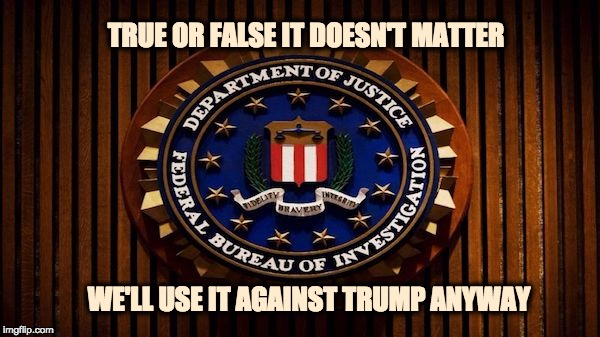 Remember that dossier leaked to CNN and published in full by BuzzFeed a few weeks before the Inauguration? Eventually proven bogus, when leaked the document was said to have “revealed” ties between Team Trump and Russia, as well as some unsavory activity between the future president and Russian prostitutes.

The FBI used that bogus dossier as part of the evidence to convince a FISA Judge to issue a warrant allowing them to spy on Team Trump. While the dossier wasn’t necessarily the driving force behind a judge’s decision to grant a warrant to the FBI to spy on Trump’s campaign, it was apparently part of the intelligence community’s case against Trump that would have been considered by the FISA judge.

It’s a key signal that the FBI had enough confidence in the validity of the document to work to corroborate it and present it in court.

The FBI has been using the dossier as a “roadmap” for its investigation into Russia’s interference in the 2016 presidential election since last year, the BBC’s Paul Wood reported last month. The document itself was not central to the bureau’s argument before a Foreign Intelligence Surveillance Court judge that Page could have been acting as an agent of Russia, according to CNN.

But the raw intelligence contained in the 35-page collection of memos — written by the former British intelligence operative Christopher Steele, who spent 20 years spying for MI6 in Moscow — apparently helped the FBI convince the court that Page could be acting as an agent of a foreign power.

Some experts have accused the FBI of having political motivations for entering the document into evidence. Others are skeptical that the bureau would have needed to use the dossier at all to bolster its case against Page, an energy consultant turned foreign-policy adviser. Page was already on the FBI’s radar because of his ties to a Russian spy who had posed as a UN attaché in New York City in 2013.

That’s interesting, considering that so much of it was either unverified, unverifiable, or just plain wrong. Talk about fake news. For example one of the things reported in the Dossier would automatically negate the document to anyone who knows about Trump and that he is a bit of a germaphobe.

The 35-page dossier of damaging and embarrassing allegations directed at Donald Trump was compiled by a former British spy last year. This former MI6 agent had been hired initially by anti-Trump Republicans to investigate Trump for opposition research purposes. He was later employed by Democrat entities.

CNN reported about this dossier in January, but they didn’t give any specific details because they hadn’t been able to verify them. BuzzFeed, however, despite acknowledging that the entire thing might be fake, decided to go ahead and publish the entire 35-page memo “so that Americans can make up their own minds about allegations about the president-elect that have circulated at the highest levels of the US government.” BuzzFeed even had this caveat at the top of their article:

“A dossier, compiled by a person who has claimed to be a former British intelligence official, alleges Russia has compromising information on Trump. The allegations are unverified, and the report contains errors.”

But of course, the target of the fake news was Donald Trump. And while the mainstream media refused to cover true stories about Barack Obama (Fast and Furious, Benghazi, IRS targeting conservatives), they will reveal anything about President Trump whether true or not.

According to the dossier, Russia has damaging information – related to finances, business, and “sexual perversions” – on Donald Trump that they intend to use in order to blackmail him if the need arises.

Looking at how U.S.-Russia relations are not too good right now, they might want to start whipping out the blackmail material to force him to do their bidding. Unless of course, they don’t actually have anything.

It’s surprising that CNN is covering this because by publishing this story they are admitting that President Trump’s tweet about being spied on by team Obama was true.

Parts of this post were first seen at Eagle Rising