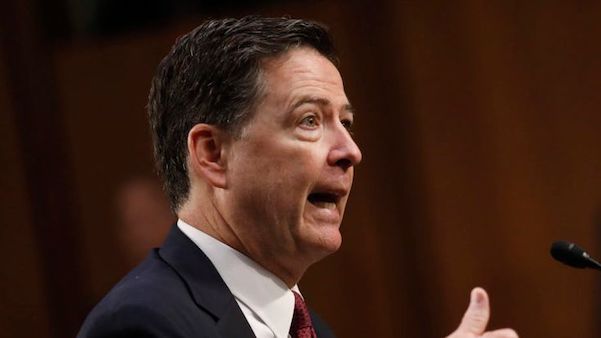 EVEN before the world became privy to the full-on corruption and malfeasance from the Comey-led FBI – in a no-holds-barred attempt to bring down a democratically-elected President Trump – the agency became infected under the Directorship of Robert Mueller, yes, the very same “independent” Special Counsel attached to the dirty Russian dossier! Credo quio absurdum…..

NOW that that is settled and out in the open, how many are aware of the very same top tier’s nexus to Islamic terror front groups, most of which operate under the RICO-like Muslim Brotherhood Mafia’s protective umbrella? If not, be prepared to spit bullets, so to speak.

(The very same Mohamed Magid, the head Imam of the Brotherhood Mafia’s ADAMS CENTER …..a mere half-hour away from D.C.!)

The Council on American-Islamic Relations (CAIR) is not “an appropriate liaison partner” for the FBI because of evidence linking the organization and its founders to Hamas, an FBI assistant director said in a letter to a U.S. Senator.

“In light of that evidence, the FBI suspended all formal contacts between CAIR and the FBI,” Richard C. Powers, an assistant director in the FBI’s Office of Congressional Affairs, wrote in a letter to Sen. Jon Kyl (R-AZ).

STILL yet, before all the dots are connected, and the indictment is sealed against the Comey-led FBI (as well as his predecessor and cohort, Mueller), let it be known: This author unmasked Comey’s so-called patriotic face, that is, when “BANNED: How Facebook Enables Militant Islamic Jihad” (August 31, 2016) brought to the fore the absolute knock-on effects from the FBI’s grave malfeasance due to his tainted leadership.

AS excerpted within the AFTERWORD: Jihad In Orlando: Facebook Takes Center Stage:

…..In 2014, the FBI hauled Mateen in again over a connection with Moner Mohammad Abu-Salha, a twenty-two-year-old Palestinian American. They had grown up together in the small Florida coastal town of Fort Pierce. Abu Salha went off to Syria, joined al Qaeda-linked Nusra Front and killed himself in a suicide attack by driving a massive truck bomb into a restaurant. Yet the FBI closed the file on Mateen after determining that the links between the two young Muslims did not warrant further inquiry. Compiling all the known data on the Orlando killer with the results of the FBI interviews with him would have placed him high on the list of suspects and called in for further questioning.

The oversight of United States law enforcement, intelligence, and security agencies recur each time Islamist terrorists strike. The Ramadan 2016 attack in Orlando showed that no lessons had been learned from the lapses that led to September 11, 2001.

The FBI erred gravely in closing the case over the Mateen connection with the Palestinian American suicide bomber. This explains why senior FBI officials are downplaying the importance of that connection. When he was exculpated, the federal authorities also discontinued electronic surveillance of the terrorist’s movements. So they missed his mounting extremism, his frequent attendance at a mosque led by a radical Imam, who regularly incited his flock to murder! Moreover, he kept his Security Officer’s ID, which gave him access to secure government sites. He was licensed to carry firearms…….continue reading the whole security disasterhere…..

FBI Cleared Extremists Who Carried Out Deadliest U.S. Attacks Since 9/11

Nearly two decades after its well-documented transgressions culminated in the worst terrorist attack on U.S. soil, the federal law enforcement agency responsible for protecting the country against a repeat still struggles to do its job, and it has cost dozens of American lives. The failures have allowed homegrown violent extremists (HVE) to carry out more than 20 attacks in the U.S. since 9/11, some of them after the agency, the FBI, closed counterterrorism investigations of the attackers.

The negligence has resulted in the death of 70 people murdered by at least six terrorists who had been under investigation by the FBI, according to a report issued recently by the Department of Justice (DOJ) Inspector General. In all the probes, the FBI closed the cases quickly after ruling that the extremists presented no threat to national security. The agency examined its mishaps in the aftermath of the deadly events. “Following these attacks, the FBI conducted reviews and determined there were weaknesses in its HVE assessment processes,” the agency watchdog writes in its report. “However, we found that the FBI has not taken sufficient action to address these weaknesses.” There is more that may not have been included in the probe. The DOJ IG goes on to disclose that “in 2017, the FBI conducted an enterprise-wide review and identified potential terrorist threats that may not have been adequately assessed during calendar years (CY) 2014 through 2016, which amounted to 6 percent of the total assessments reviewed. We found that the FBI did not take adequate action on nearly 40 percent of these assessments for 18 months.”

The latest FBI transgressions resulted in some of the deadliest terrorist attacks since Islamic jihadists carried out their plots in 2001, killing thousands of innocent Americans. They include the 2009 massacre at the Fort Hood Army base in Texas, the 2013 Boston Marathon bombing, the 2016 mass shooting at an Orlando, Florida nightclub, and the 2017 attack at the Fort Lauderdale Airport in south Florida. In 2011 the FBI opened a counterterrorism lead into Nidal Hasan, the perpetrator of the Fort Hood shooting. Still, the probe was closed five months later after agents evidently determined that Hasan did not pose a national security threat. Months later, he massacred 13 people at a U.S. military post. The Orlando shooter, Omar Mateen, was also under FBI investigation before he carried out his attack for making statements that displayed his radicalized ideology. Less than a year later, the probe was closed after agents ruled the information to be unfounded. Mateen killed 46 people.

Boston Marathon terrorist Tamerlan Tsarnaev was also on the FBI’s radar before his attack. Still, the agency decided that he and his terrorist brother, Dzhokhar Tsarnaev, did not pose a threat to national security, according to the IG report. Tamerlan Tsarnaev, the older brother who was eventually killed in a wild shootout with police, was under investigation by the FBI’s Joint Terrorism Task Force (JTTF) after Russian authorities notified the agency that he had become radicalized. The Obama administration could have deported Tamerlan Tsarnaev years before he detonated bombs at a major sporting event over a criminal arrest, according to information uncovered by Judicial Watch shortly after the bombings that killed three and injured hundreds. The government also dropped the ball on Esteban Santiago, who killed five people in a 2017 attack at the Fort Lauderdale Airport. Weeks before the rampage, the FBI closed Santiago’s probe ruling that he did not pose a threat to national security.

It seems that little has changed since 9/11. After the attacks, the FBI got blasted for missing many opportunities to stop the hijackers and failing to uncover critical intelligence about them. In fact, a DOJ IG report disclosed that the FBI missed at least five opportunities before the 2001 terrorist attacks to uncover crucial intelligence about the perpetrators. The watchdog specifically blamed the FBI for not knowing that two of the 9/11 hijackers lived in the U.S. and for failing to follow up on an agent’s theory that Osama bin Laden was sending students to American flight schools. A decade and a half later, a panel created by Congress to determine if the FBI had adopted post-9/11 recommendations found that the problems persisted. In a 2015 report, the 9/11 Review Commission was critical of the FBI’s Joint Terrorism Task Force’s ability to detect terror plotters before they strike and found the agency’s computer hacking investigations were lacking.

DEAR reader, as you click through the above bullet-proof evidence in these “connect the jihadi dots” (with even more embedded within this entire site) exposés, know that only the deaf, dumb, and blind, or, for that matter, the willfully ignorant, could have missed the glaring and blaring evidentiary trails.

SO, decide for yourselves: Did Comey’s (Mueller’s, too) FBI, as instructed, purposefully drop the ball vis-à-vis Islamic jihadis? Or, have they infected the top tier to such a degree that it makes it impossible to recognize friend from foe?