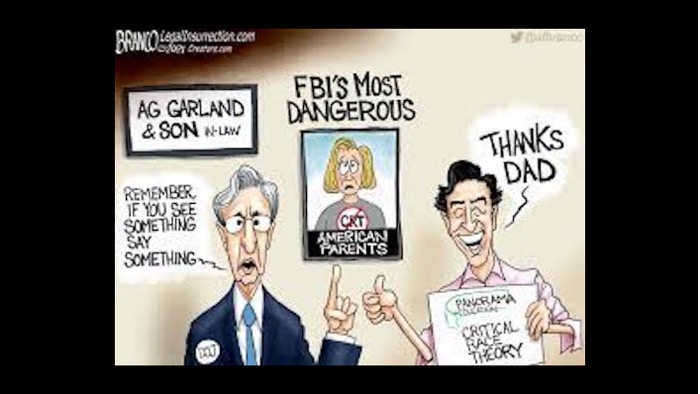 Joe Biden’s corrupt FBI has been outed by a whistleblower for tracking parents who dare to oppose leftist school boards and for labeling them as “terrorists.”

That’s right, America, if you dare to speak out against left-wing indoctrination of kids, Biden is going to label you a terrorist and send his jackbooted thug FBI to track your movements in preparation for jailing you.

In October of last year, Biden’s corrupt Dept. of Justice chief Merrick Garland expressed concern about a “disturbing spike in harassment, intimidation, and threats of violence against school administrators, board members, teachers, and staff who participate in the vital work of running our nation’s public schools.”

“Threats against public servants are not only illegal, they run counter to our nation’s core values,” Garland wrote at the time. “Those who dedicate their time and energy to ensuring that our children receive a proper education in a safe environment deserve to be able to do their work without fear for their safety.”

To combat this alleged problem, Garland announced a 30-day plan that would have the FBI working with U.S attorneys across the country to discuss “strategies for addressing threats against school administrators, board members, teachers, and staff, and will open dedicated lines of communication for threat reporting, assessment, and response.”

The memorandum arrived less than a week after leaders of the National School Boards Association wrote President Joe Biden a letter claiming that “many public school officials are also facing physical threats because of propaganda purporting the false inclusion of critical race theory within classroom instruction and curricula.”

“This propaganda continues despite the fact that critical race theory is not taught in public schools and remains a complex law school and graduate school subject well beyond the scope of a K-12 class,” the letter emphasized.

Of course, Garland is a liar. CRT actually forms the very basis for all of today’s left-wing school indoctrination. The way they get around the fact is that no one in the miseducational establishment actually puts that direct label on it. But EVERYTHING they teach is grounded in the principles of CRT. So, it is CRT without the label of CRT.

But now a whistleblower has found that Garland and his crooked FBI used these false accusations of “crimes” committed by parents who dare to oppose leftism as a reason to label them as terrorists and set them up for incarceration by FBI stormtroopers.

In the months that followed, Rep. Jim Jordan (R-OH) and Rep. Mike Johnson (R-LA) conducted an investigation into Garland’s directive and the Biden administration’s involvement in the FBI’s conduct and uncovered some disturbing facts. In a letter issued to Merrick Garland on Wednesday, the two congressmen claimed that a whistleblower brought forward evidence alleging that the FBI “labeled at least dozens of investigations into parents with a threat tag created by” the agency’s counterterrorism division “to assess and track investigations related to school boards.”

“These cases include investigations into parents upset about mask mandates and state elected officials who publicly voiced opposition to vaccine mandates. These investigations into concerned parents are the direct result of, and would not have occurred but for, your directive to federal law enforcement to target these categories of people,” the letter said.

The whistleblowers reportedly claimed that the FBI opened investigations with the threat tag all over the country. Of the examples cited, one FBI investigation centered on a mom flagged by the National Threat Operations Center snitch-line, who was described as a “right-wing” member of the group “Moms for Liberty.” The investigation sparked after she allegedly told a local school board “we are coming for you.” The FBI later determined that the mother was no threat and that her rhetoric referred to a peaceful transfer of power through school board elections.

Whistleblowers: The FBI has labeled dozens of investigations into parents with a threat tag created by the FBI's Counterterrorism Division pic.twitter.com/STlLdrfbMz

This is what Democrats have done to our government and how they have corrupted what was once one of the best investigative service in the world. The FBI is now an anti-American Stasi used by Democrats to destroy political opposition.

Note: The Cartoon Above was created by AF Branco. If you want to see more of his brilliant work go to his site at https://comicallyincorrect.com/