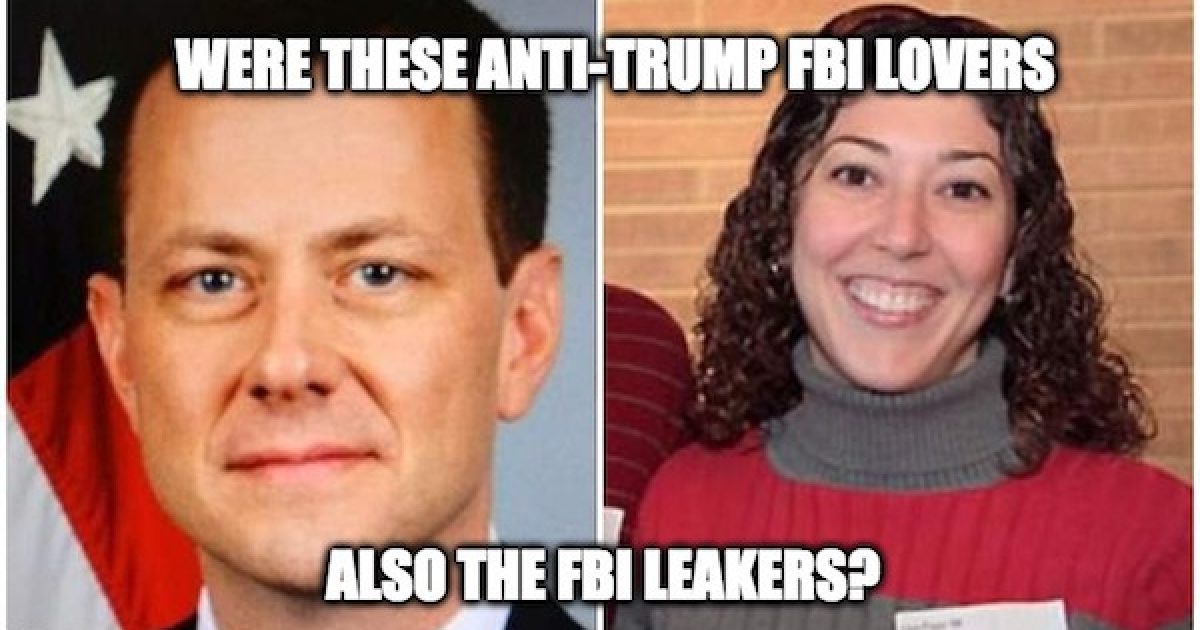 What a sad day it is in America. A newly discovered series of text messages between FBI agent Peter Strzok and bureau lawyer Lisa Page indicates that the two may have been involved in the leaking of anti-Trump documents.

We have seen time and again, multiple instances of likely corruption happening within our most sacred institutions. The very law enforcement agencies that we established to ensure our liberty, to watch with vigilance over our political process, and to act impartially at all times, have themselves become cesspools of political intrigue and bias.

It was only whispers during the Obama era. How we wondered could the IRS go unpunished once their crimes had been discovered? How could the BLM be allowed to seize private property, and to fine innocent ranchers without being held accountable? How could the CIA, the NSA, and the FBI all misuse the investigative tools we’ve given them and no one in our government told us about it? Instead, we were forced to hear it from whistleblowers who themselves then became criminals!

In the wake of Robert Mueller being forced to fire agents from his staff for rank political bias, Congress began looking more closely at the investigators who were supposed to be covering these cases in an unbiased manner. What they found was troubling.

Congress has uncovered a series of texts between FBI counterintelligence agent Peter Strzok and bureau lawyer Lisa Page that seem to detail discussions about various articles coming out in the media that undermined President Trump and his administration. The texts seem to indicate that the two government employees knew about the specific leaks before they appeared in the news.

“Wsj? Boy that was fast,” Strzok texted back, using the initials of the famed financial newspaper. “Should I ‘find’ it and tell the team?”

The text messages, which were reviewed by The Hill, show the two FBI agents discussed how they might make it appear they innocently discovered the article, such as through Google News alerts.

“I can get it like I do every other article that hits any Google News alerts, seriously,” Strzok wrote, adding he didn’t want his team hearing about the article “from someone else”…

It wasn’t just a few texts or one or two leaks either.

The Hill reviewed nearly three dozen texts in which the two agents discussed articles, tried to track down information about a specific New York Times reporter or opined about leaked information in stories that they fretted were “super specific.”

Republican investigators in both the House and Senate say the text messages suggest FBI personnel may have had media contacts but don’t necessarily prove it. So they want to learn more about what the two agents were talking about and whether any FBI officials involved in the Russia probe engaged in leaking, sources told The Hill…

In one series of messages just before the election they two seem to admit that they have been leaking information but that some of the stories have too much information in them, implying there may be other leakers.

In one string of text messages just five days before Election Day 2016, Page, the lawyer, alerted Strzok, the counterintelligence agent, to a story in The Washington Post about a timeline in the controversial Hillary Clinton email investigation.

Page mentions a conversation she had just had with FBI chief of staff James Rybicki and openly expressed concern the information about the FBI’s timeline was too specific for comfort in the article.

“Sorry, Rybicki called. Time line article in the post (sic) is super specific and not good. Doesn’t make sense because I didn’t have specific information to give.”

A few days earlier Strzok texted Page about another new article, suggesting it was anti-FBI. “Yep, the whole tone is anti-Bu. Just a tiny bit from us,” he wrote.

Page texted she had seen the article. “Makes me feel WAY less bad about throwing him under the bus to the forthcoming CF article,” she texted. Congressional investigators are still trying to determine what the “CF article” reference means and who the agents thought they were trying to throw “under the bus.”

Republicans want to interview Page to determine if she assisted with any “forthcoming” articles or helped another FBI employee “give” information to the news media, particularly because she helped advise then-deputy director McCabe.

Likewise, congressional investigators want to question Strzok about what he meant about the “tiny bit from us” reference.

While none of it is proof-positive that these two agents were the leakers who leaked dozens of classified stories to the press in the early months of the Trump era (and before), they are simply too specific to be meaningless.

Strzok and Page walk right up to the line in admitting their crimes int he texts and no reasonable jury could believe that they weren’t leaking information out.

What makes the story all the more enraging is that they both served in key positions within the intelligence community. Strzok was a key investigator in the early days of the Russia collusion investigation, and Page was a close adviser to then acting director Andrew McCabe.

These egomaniacal intelligence agents and the allies they have working in various intelligence agencies must be stopped. They may believe that they are acting for the good of the nation and that they have more information about these important subject than we do… but if we can’t trust the intelligence community, then we can’t trust our government. As soon as the American people realize that they cannot trust the people they’ve entrusted to protect our liberties, the entire foundation of our nation begins to crumble. For our sake, for the sake of our nation, and for the sake of the intelligence community – these unethical, hypocritical traitors who use their power and the trust we’ve given them to thwart our Constitution must be rooted and cast out.

Congressman Jim Jordan was on Fox News last night to talk about this and other revelations we’ve learned over the last couple of days.

I think when you couple what Senator Feinstein released today with the story John Solomon wrote this morning on additional text messages we’ve now reviewed, where they talk about planting stories:

[FBI agent] Peter Strzok and [FBI attorney] Lisa Page in their text message exchange talk about planting stories with the media to further their narrative. And what was their narrative and what was their plan? It was the insurance policy that was designed to make sure that we can’t take the risk the American people are going to elect Donald Trump president.

So now this all fits together. So that’s what I found most interesting today is those text messages that those text messages that John Solomon wrote about, along with what Senator Feinstein released and how it fits this idea that the FBI was actively planning and orchestrating in a systematic way this idea we are going to generate stories that further our narrative and the plan we have.