Top FBI Attorney (And Others) Wanted To Charge Hillary, But Comey Talked Them Out Of It 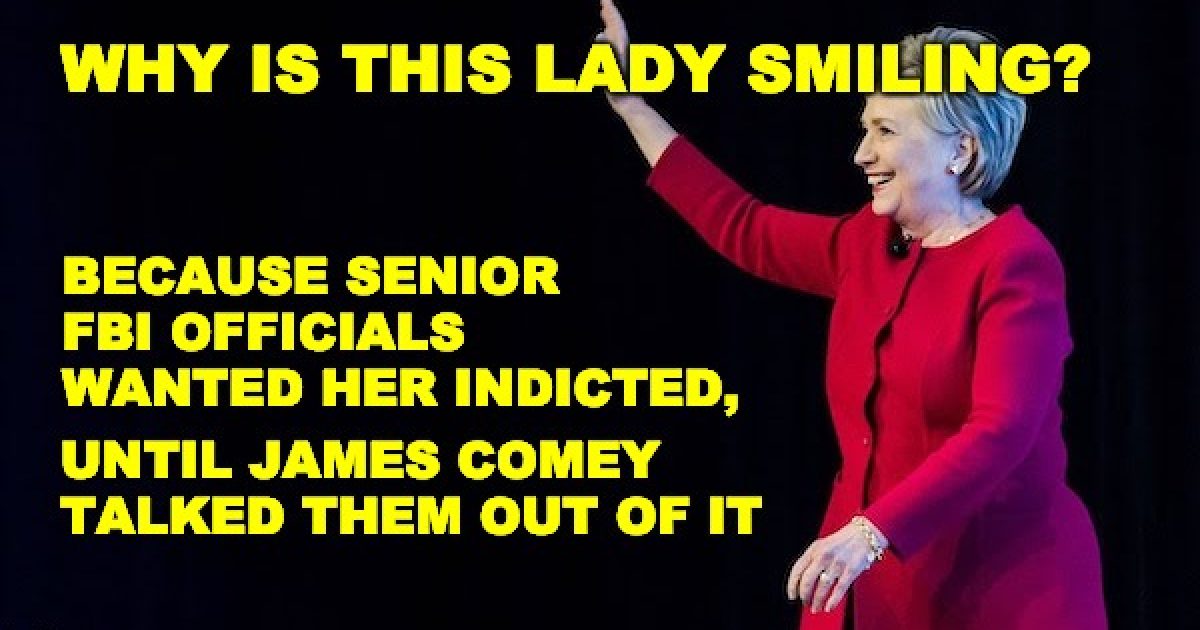 Remember when former FBI Director James Comey said the entire FBI was behind his decision to let Hillary Clinton off the hook? That wasn’t entirely true. Former FBI chief attorney James Baker wanted Clinton indicted for her violations of the Espionage Act, for mishandling government secrets by sending them over a non-secure email server. And he fought hard for Hillary Clinton to face the consequences for her actions to just before Comey made his famous July 2016 “no reasonable prosecutor would bring such a case” speech.

In that speech Comey said Hillary screwed up big time, he raked her over the coals, saying she lied about saying there was nothing on her server that was classified before she received it, while he can’t discern whether she was hacked he knows people who she emailed to were hacked.  He actually seemed disgusted when he said Hillary Clinton was reckless, and that in other cases she would lose access to top secret information. In the end, he said the FBI would not recommend prosecution because no reasonable prosecutor would bring charges without proof of intent. Which is something not necessary for someone to be charged under the Espionage Act but was used as an excuse anyway.

When Baker testified, revealed details of the Clinton investigation and that he wanted her charged until very close to the end of the inquiry when Comey and others convinced him that a criminal charge that didn’t need intent, needed intent.

Baker held onto that belief until shortly before his former boss FBI Director James Comey made the public announcement not to charge Clinton on July 5, 2017. He said he changed his position only after arguing and discussing the situation over a period of time with senior colleagues at the bureau, to include Comey. Comey, however, had already written an early draft in May, exonerating Clinton and changing “grossly negligent,” a legal term for mishandling classified information to “extremely careless,” according to drafts obtained by the Senate Judiciary Committee in 2017.

John Solomon reported at The Hill that Rep. John Ratcliffe (R-Tx) asked Baker about changing opinion during his testimony:

“I have reason to believe that you originally believed it was appropriate to charge Hillary Clinton with regard to violations of law — various laws, with regard to mishandling of classified information. Is that accurate?” Ratcliffe, a former federal prosecutor, asked Baker.

Baker paused to gain his lawyer’s permission to respond, and then answered, “Yes.”

He later explained why he came to that conclusion, and how his mind was changed:

Asked when he was persuaded to change his mind, Baker said: “Pretty late in the process, because we were arguing about it, I think, up until the end.”

Baker made clear that he did not like the activity Clinton had engaged in: “My original belief after — well, after having conducted the investigation and towards the end of it, then sitting down and reading a binder of her materials — I thought that it was alarming, appalling, whatever words I said, and argued with others about why they thought she shouldn’t be charged.”

His boss, Comey, announced on July 5, 2016, that he would not recommend criminal charges. He did so without consulting the Department of Justice (DOJ), a decision the department’s inspector general (IG) later concluded was misguided and likely usurped the power of the attorney general to make prosecutorial decisions. Comey has said, in retrospect, he accepts that finding but took the actions he did because he thought “they were in the country’s best interest.”

Baker acknowledged that during the weeks leading up to the announcement, Comey “would throw things out like that to get people to start talking and thinking about it and test his conclusions.”

Baker said that if he had been more convinced there was evidence that Clinton intended to violate the law, “I would have argued that vociferously with him (Comey) and maybe changed his view.”

But according to the statute,  US 793 subsection F, the one Hillary violated, “gross negligence” in handling the nation’s intelligence can be punished criminally with prison time or fines, and there is no requirement that defendants acted intentionally.

Baker wasn’t alone.  According to an October 2016 report by Fox News, the FBI decision not to prosecute Hillary Clinton was made at the top levels of the FBI and Department of Justice, overruling the almost unanimous recommendation of the agent’s and attorneys who wanted Hillary Clinton charged.

A source who worked on the investigation and spoke to FoxNews.com on the condition of anonymity said FBI Director Comey’s announcement that Hillary wouldn’t be charged dismayed and disgusted the investigation team of more than 100 FBI agents, analysts, and DOJ attorneys (and a big chunk of the American public).

“No trial level attorney agreed, no agent working the case agreed, with the decision not to prosecute — it was a top-down decision,” said the source, whose identity and role in the case has been verified by FoxNews.com.A high-ranking FBI official told Fox News that while it might not have been a unanimous decision, “It was unanimous that we all wanted her [Clinton’s] security clearance yanked.”

“It is safe to say the vast majority felt she should be prosecuted,” the senior FBI official told Fox News. “We were floored while listening to the FBI briefing because Comey laid it all out, and then said ‘but we are doing nothing,’ which made no sense to us.”

It made no sense to the rest of us either.

The fact that the testimony of James Baker and the FNC sources others indicates that Comey worked hard to get Hillary “off the hook.”