It looks as if the Palestinians are playing that same old game, one comment for the world’s consumption, and the other for Arab consumption. In Moscow today, Russia’s foreign Minister made an announcement with great hoopla:

Hamas should use its authority to stop violence including missile attacks against Israel,” Russia’s FM Lavrov said at a news conference after his meeting with Hamas Terrorist Khaled Mashaal “We received confirmation that such steps will be taken,” Lavrov, said.

(A Breen Cartoon from 2005 is still true today) 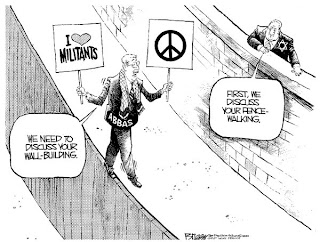 At about the same time that the Hamas baby-killer was making nicey-nicey with the Russians, one of the Capos of Abbas’ terrorist organization was telling a very different story in the Palestinian press. Jamal Nazzal of Fatah (the party controlled by the moderate Abbas) makes some pretty striking comments in an interview with the Ma’an News AgencyJamal Nazzal of Fatah asserts that both Fatah and Hamas have made significant concessions

How the agreement changes the “peace” process:

Foreign journalists say that Hamas is committed to destroying Israel so how can the Palestine Liberation Organisation pretend that they can achieve peace with Israel in the name of the Palestinian people?

Has Hamas Changed its stance since Mecca?:

There are some spokesmen in the Palestinian territories who try to boast that Hamas respects rather than commits to the already signed treaties. This might send some mistaken impression to the Quartet in regards to the ‘worthiness’ of Hamas to get the siege lifted, while, in the point of view of the westerners, Hamas is leading a war against the existence of Israel. In fact Hamas is holding a truce with Israel and this is something well-known.

Fatah’s language has changed since May 2006. We are committed to the resistance because if the resistance ends, Fatah ends. We are a wide movement, and contain all sectors of society. You can find Marxists as well as religious people in the Fatah movement. We have to deal with all these people in the movement and we have extensive relations with all the liberation movements in the world. Our language in Fatah is the Palestinian hope and the Palestinian ambitions.

Did this guy say what I think he said? The reason Fatah doesn’t want peace is that once there is peace there is no Fatah. HOLY COW! Self-sustaining bureaucracy is one thing, but Fatah is killing Palestinian and Israeli children because they don’t want to become obsolete!!!! And the future?

In Mecca we were forced to choose between satisfying Israel or Hamas. We chose Hamas and made concessions for the sake of the higher Palestinian interests. We joined Hamas under blockade without guarantees that the blockade will be lifted.

Tomorrow when you get your morning paper, there will be “reporters” and columnists drooling all over themselves about the announcement in Russia…”Hamas Promises to End Violence” It will be so big it may even take Anna Nicole Smith off the front pages. But folks remember that it is the season of Purim, a holiday where we learn that sometimes the truth is hidden. It’s the same way with the Palestinians; don’t look for the grand announcements, because sometimes the truth is hidden not in the world press but in their own.

Who is REALLY Going to Get Stuck Paying Biden’s Higher Corporate Taxes?
April 20th, 2021 The Lid