Farrakhan Says God Wants Black People To Have Their Own State 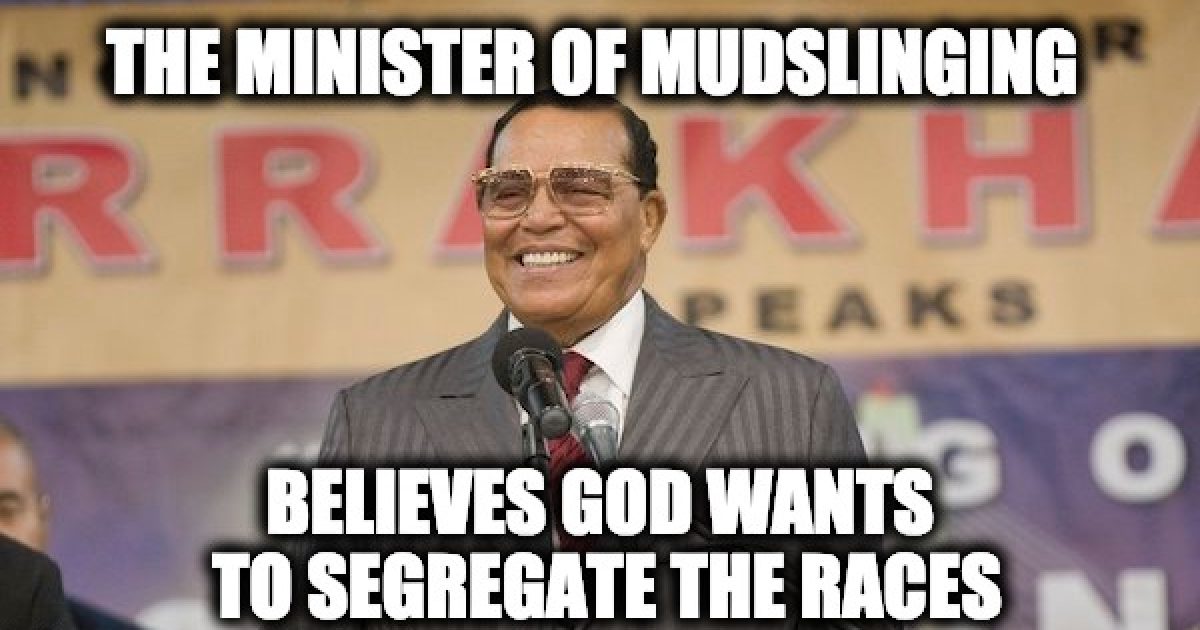 Farrakhan is acting crazy again.  The Pastor of Putrid posted a short video on his Instagram account clipped from a 2015 interview on the Rock Newman radio show where he claims that God wants to segregate African Americans and Caucasians into separate American States.

Newman asks Farrakhan if it is still his goal and that of the Nation of Islam to have a separate state for Black People.

That’s not just my goal. That’s what God wants! Most of our people don’t want it yet. You love your enemy. You want to stay with your enemy. You’re in love with his wealth!  Oh, I understand the fascination, slaves! I understand that. But God has something else for us! Let me tell you what’s gonna happen. Yes, I’m after a separate state. A separate nation. In the ’60s, what was our cry, Rock? We weren’t saying we want to integrate, we were saying ‘It’s nation time!’ Black Power to do what? To integrate a lunch counter? Black Power to build a nation for 40 million — now near 50 million — Black people.

I wonder how God told Louis Farrakhan to divide the races?  Was it on the phone? If so did he call God, or did God call him? “Hey Louis, God here, I have something really evil to push.”  Did it come from the car radio like George Burns did to John Denver in “Oh God!”?

Did they only talk about segregating the races?  If he went one on one with the creator of the universe for an entire week, did he ask about the weather? Get stock tips? I would love to know if God told Farrakah who is going to win the big game on Sunday.

There is a rumor that God gave Farrakhan a map to forward to the FBI. It was one of those old Esso gas station maps of Michigan. On the map, there was a red “x” marked on a location outside of Detroit. Farrakhan didn’t know what the map was for, but right after he sent it,  the FBI said that they had a new lead in the Jimmy Hoffa case.

The real question is would God talk directly to Louis Farrakhan at all?  I mean, Farrakhan isn’t very tolerant, he prays for America to be destroyed, calls Jews termites, praised both Hitler and Quadafi and has said of Caucasians, “white people deserve to die,” those words just don’t seem like the words of someone that God would want to talk to directly. Unless of course, the big guy upstairs was telling Farrakhan to stop being a bigot and start loving his fellow man.

The minister of mudslinging is ignoring the “Golden Rule” which Islam has also:

A Bedouin came to the prophet, grabbed the stirrup of his camel and said: O the messenger of God! Teach me something to go to heaven with it. Prophet said: “As you would have people do to you, do to them; and what you dislike to be done to you, don’t do to them. Now let the stirrup go!- Kitab al-Kafi, vol. 2, p. 146

Below is the video Farrakhan posted: