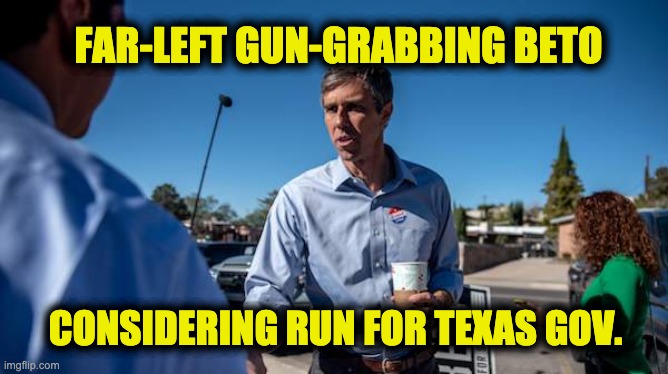 Beto O’Rourke, who not only lost a U.S. Senate race against Sen. Ted Cruz (R-TX) but also failed in his bid for the Democratic presidential nomination, said earlier this week he is considering a run for Texas governor.

Speaking to El Paso radio station KLAQ, O’Rourke said running for Texas governor was “something I’m going to think about.”

The next day, Gov. Greg Abbott was asked about a potential challenge from O’Rourke, the Texas Tribune reported:

“You’re talking about a person who says they want to run for governor who said, ‘Heck yes,’ he’s gonna come and take your guns,” Abbott said, referring to O’Rourke’s 2019 embrace of a mandatory buyback program for assault weapons. “Heck yes, he’s for open borders. Heck yes, he’s for killing the energy sector and fossil fuels in the state of Texas. I don’t think that’s gonna sell real well.”

Not reported was how long Governor Abbot laughed after hearing the news.

O’Rourke said, “Whether or not I run, I will do everything in my power to elect a Governor who looks out for everyone, keeps Texans safe, answers to the people instead of the special interests & guarantees that we all have equal opportunity to achieve our best in life.”

Forget the 1st Amendment and, well, every Amendment! Who needs ’em? In Beto’s America, everything will be just dandy. But don’t forget…in Betoville, there are no guns for law-abiding citizens. Are we all good with that?–In Texas?

You want to protect your family against a home invader? Use a fork – you know, until those are banned, too.

You want to go hunting? Better bring your sling-shot!

Beto went all out in the 2020 election –unsuccessfully. During the primary season, he went full socialist.

The unprecedented concentration of wealth, power and privilege in the United States must be broken apart. Opportunity must be fully shared with all. We must all have the opportunity to succeed. Together. As one country.

He dropped out of the race for the Democratic nomination a year before the general election.

After dropping out of the 2020 presidential primary, O’Rourke turned his attention back to state politics, plunging into the fight for the Texas House majority through a new political group, Powered by People. Abbott’s campaign aggressively used O’Rourke as a boogeyman in the House battle, which ended with Republicans holding on to their 83-member majority.

The morning after the November election, Abbott’s top political adviser, Dave Carney, said on a conference call with reporters that the governor’s campaign had been preparing for 2022 “since literally the day after ’18” and that he expected a $100 million “battle.” But Carney brushed off the possibility of an O’Rourke challenge, suggesting O’Rourke would be less enticed after Joe Biden failed to flip to Texas — and Donald Trump carried it by a wider-than-expected margin.

“I’ll bet you a steak dinner that doesn’t happen,” Carney said of an O’Rourke 2022 bid.

Whether it happens or not, It’s hard to believe that Beto would beat the incumbent Gov. Abbott. He’s not too smart, and he’s not a believer in freedom.

Ultimately Beto is just not a smart person https://t.co/eHkKJc8a0H

O’Rourke did have one campaign success–it was accidental and not his. Much to his chagrin, he helped elect Lauren Boebert to Congress. She confronted Beto O’Rourke at a town hall in Aurora, Colorado, saying, “I was one of the gun-owning Americans who heard you speak regarding your ‘Hell yes, I’m going to take your AR-15s and AK-47s.’ Well, I’m here to say, ‘Hell no, you’re not.’” That confrontation made Boebert famous. Three months after that confrontation, she’s announced a run for congress and was elected in November 2020.

Gov. Abbot is probably praying that Robert Francis “Beto” O’Rourke is his 2022 election opponent. Beto came close to beating Ted Cruz in 2018, but since then he moved even further left and became firmer in his anti-gun stance. Far-left gun-grabbers do not win many elections in the Lone-Star State.