How A Cute Toddler Everyone Loved Grew Into A Teen Bully With Trust Issues. 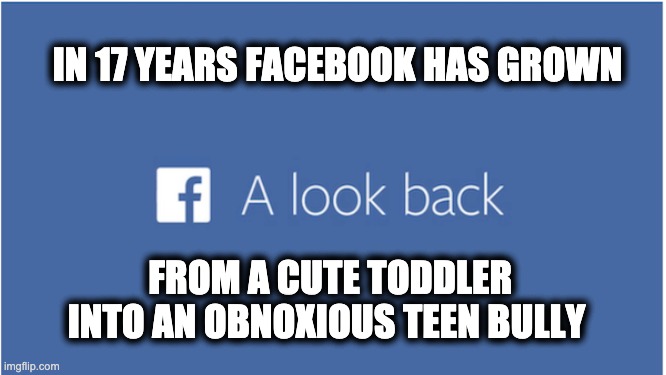 Seventeen years ago Wednesday,  a Harvard University sophomore named Mark Zuckerberg launched The Facebook, a social media website he built to connect Harvard students with one another. By the next day, over a thousand people had registered, and that was only the beginning. Now known simply as Facebook, the site quickly ballooned into one of the most significant social media companies in history. Today, with 244 million combined monthly active users in the United States and Canada, Facebook is the most popular social network in the United States.

But like any 17-year old, Facebook has changed since its infancy. Consider how its mission statement has evolved over time:

2004 – Thefacebook is an online directory that connects people through social networks at colleges. [Limited to your own college or university]

2006 – Facebook is an online directory that connects people through social networks at schools.

2006 – Facebook is a social utility that connects you with the people around you [Facebook is made up of lots of separate networks – things like schools, companies, and regions]

2007 – Facebook is a social utility that connects you with the people around you. [upload photos or publish notes – get the latest news from your friends – post videos on your profile – tag your friends – use privacy settings to control who sees your info – join a network to see people who live, study, or work around you]

2021 – Give people the power to build community and bring the world closer together.

When Facebook was a cute toddler, everyone loved him, but he has grown into an obnoxious teen who has become a bully through lack of discipline.

Facebook’s bad behavior started slowly, almost imperceptibly. It is hard to pinpoint exactly when it began, but at some point, conservative individuals and groups started seeing a decline in engagements with their posts.

Laura Evans, a marketing consultant in the firearms industry, has been using Facebook socially and professionally for more than a decade. She was among the first users to discover Facebook’s content bias.

“In my work with companies and manufacturers in the firearms industry, selling anything on Facebook is impossible,” explained Evans. “The only way we’ve been able to get around that is through working with social media influencers, but even they are being stifled. They are getting kicked off left and right.”

With the advent of content-neutral sites such as Parler, conservatives were able to see for the first time how Facebook was suppressing their content.

Evans elaborated, “Years ago I talked to a major firearms manufacturer who said Facebook was just a failure for them. At one point, they were getting 100,000 views per post, and their engagement was through the roof. Then overnight, it vanished, and they were lucky if they got a thousand views per week. That’s half-a-million fans no longer able to enjoy content from a company they chose to follow.”

More recently, Facebook, emboldened by the lack of pushback on their covert efforts to censor conservative content, began to overtly censor and ban content and users. The most shocking takedown, of course, was of President Trump’s account. But before that, Facebook began placing warning labels on political content. In recent months, so many conservatives have been restricted on Facebook, it has become somewhat  of a badge of honor among conservatives to be placed in “Facebook jail.”

Facebook’s actions are at odds with at least one of its core principles, “to give people a voice.” According to its website, “People deserve to be heard and to have a voice — even when that means defending the right of people we disagree with.”

At age 17, Facebook has high ideals, which perhaps someday it will live up to.

Jeff Note: As someone who has spent more of 2020 in Facebook jail than not,  I believe Facebook left off one part of its core principles. It should read ““People deserve to be heard and to have a voice except for republicans — even when that means defending the right of people we disagree with, except for conservatives.