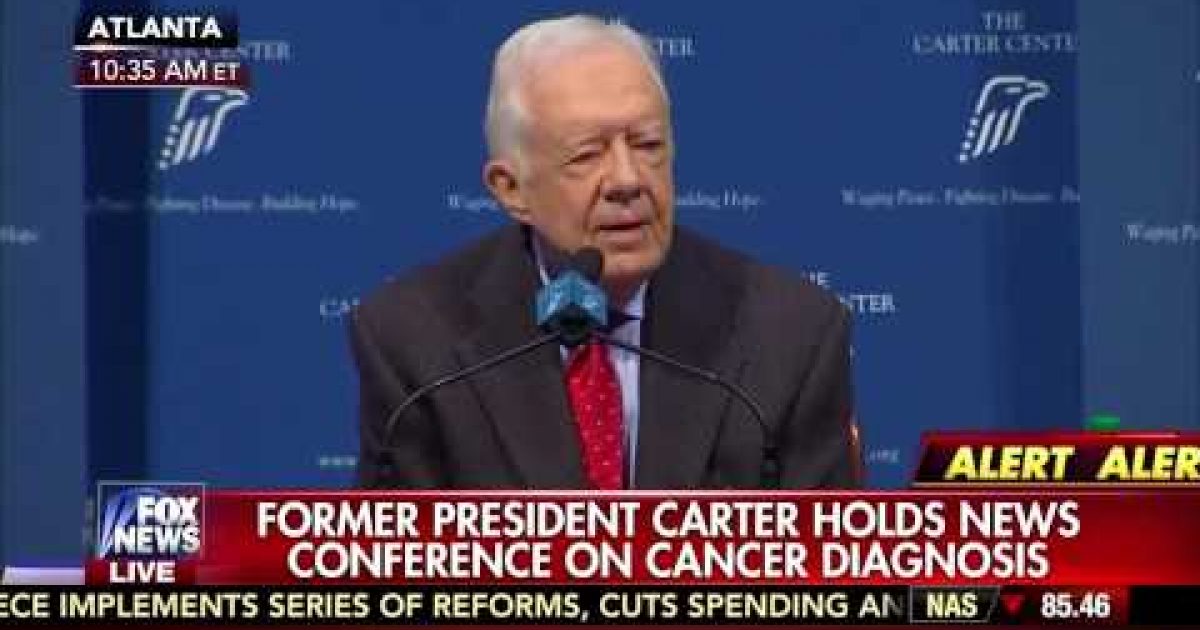 Despite writing about Jimmy Carter’s hatred of Jews and Israel for over a decade, when I heard last week that Jimmy Carter’s cancer had spread I felt bad for the man, his family, friends and prayed that he would be free of pain till the end. To be honest I began to agonize what I would write about when he died. Usually I ignore the deaths of dishonorable people, the two exceptions were Helen Thomas who I exposed as an anti-Semite which destroyed her career and John Murtha the late congressional king of pork who disgraced himself and the uniform he wore by making false charges against soldiers honorably serving in Afghanistan.

I pretty much decided I would keep silent. Especially when he started his press conference on Friday revealing that the horrible disease had spread to his brain. Well—that was until a reporter asked him what he would like to see happen before he died, and when he answered the former president slandered the Jewish State (see video below):

In international affairs I would say peace for Israel and its neighbors. That has been a top priority for my foreign policy projects for the last 30 years. Right now I think the prospects of are more dismal than anytime I remember in the last 50 years. Practically, whole process is practically dormant. The government of Israel has no desire for two-state solution, which is policy of all the other nations in the world. And the United States has practically no influence compared to past years in either Israel or Palestine. So I feel very discouraged about it but that would be my number one foreign policy hope.

Perhaps it’s all the Times he met with Hamas, ignoring their terrorism and declaring they want peace that has clouded Mr. Carter’s memory.  But the Author of a book with a title calling the Jewish State an apartheid nation forgets history.  The truth is that the last Israeli Premier who did not support a two state solution was Yitchak Rabin. Every prime minister since Peres, Netanyahu, Sharon, Barak, Comb-over...er Olmert, every single one of them declared their goal was a two state solution. Heck under Barack and Olmert, the Palestinians were offered deals which gave them 98% of what they wanted and each time they said no.  On the other hand even years after Rabin shook the hands of the terrorist Arafat the Palestinians refuse to recognize the sovereign Jewish State of Israel.

So why would Jimmy Carter take the time to slander the Jewish State at the same time he was announcing the graveness of his illness.  That’s easy, Carter hates Jews.

Anti-Semitism is not a claim I make lightly especially about a guy who seems to be close to meeting his maker, but I feel that his slander needs to be answered. So allow me to present some evidence.

For example, ultra-liberal Alan Dershowitz  feels that Carter is a Jew-hater. In an essay talking about Carter’s anti-Semitic claims that the Jews control foreign policy and the media, he wrote:

The entire premise of his criticism of Jewish influence on American foreign policy is that money talks. It is Carter, not me, who has made the point that if politicians receive money from Jewish sources, then they are not free to decide issues regarding the Middle East for themselves. It is Carter, not me, who has argued that distinguished reporters cannot honestly report on the Middle East because they are being paid by Jewish money. So, by Carter’s own standards, it would be almost economically “suicidal” for Carter “to espouse a balanced position between Israel and Palestine.”

(…) If money determines political and public views as Carter insists “Jewish money” does, Carter’s views on the Middle East must be deemed to have been influenced by the vast sums of Arab money he has received. If he who pays the piper calls the tune, then Carter’s off-key tunes have been called by his Saudi Arabian paymasters. It pains me to say this, but I now believe that there is no person in American public life today who has a lower ratio of real to apparent integrity than Jimmy Carter.

Ambassador Marc Ginsburg was Jimmy Carter’s deputy senior adviser on the Middle East, and from 1977 through 1980 was White House liaison to the State Department. He has a unique perspective of Jimmy Carter’s Middle East dealings. According to the Ambassador, the reason Carter goes out of his way to bash Israel is that he feels American Jews did not kiss his butt enough for all that he did for Israel.

…When former President Jimmy Carter revealed that Israel has more than 150 nuclear weapons, he clearly had a motive, according to his administration’s deputy senior adviser, Marc Ginsberg: “I think there’s no doubt — particularly given the vantage point I had in the White House at the end of his administration — that he resents the way in which Israel and the American-Jewish community have failed to express sufficient gratitude for his efforts on behalf of peace in the Middle East.

“In my judgment, there’s no other explanation,” Ginsberg says.

(…) “There’s no doubt he knows exactly what he is doing when he’s making these statements, or making misrepresentations that Hamas has agreed to recognize Israel if certain conditions occur, or to the book he wrote [‘Palestine: Peace Not Apartheid’] referring to Israel.”

About those Camp David talks most people forget how Carter didn’t want them to happen. The truth is when Sadat went to Jerusalem and Israel and Egypt began bi-lateral talks, Carter objected. He didn’t care that the peace process already begun by Sadat and Begin might lead to peace, Carter wanted his “Geneva Peace Process” plan or nothing.

Thankfully Carter couldn’t stop the approaching peace train. Within
days after the Sadat vist  Israeli journalists were allowed into Cairo,
breaking a symbolic barrier, and from there the peace process quickly
gained momentum and dragged Carter along.

As President Carter even rejected someone for a position on the board of the Holocaust Memorial Council because the guy’s name was too Jewish:

William Bradford Smith, Chair of the Division of History, Politics & International Studies at Oglethorpe University in Atlanta once sent a letter to the Jewish Exponent in Philadelphia, which said in part:

Carter’s hatred of Israel and, by extension, of all Jews (and make no mistake, if you spend any time in the man’s presence, his discomfort at being in the same room with someone who merely appears to be Jewish is palpable), is rooted in the man’s megalomania, and his unflinching belief in his own rectitude.

Here’s the bottom line, I am sorry the guy is so sick but that doesn’t change the fact that deep in his heart he is an anti-Semitic dirt-bag. As he plays out his last days, I would just like to give the former President one suggestion, perhaps it’s time to learn Hebrew, because when he meets his maker he may be a bit surprised about how he feels about Jew-haters.

Nancy Pelosi: Trump Could Be Charged as Accessory to Murder
January 21st, 2021 The Mental Recession