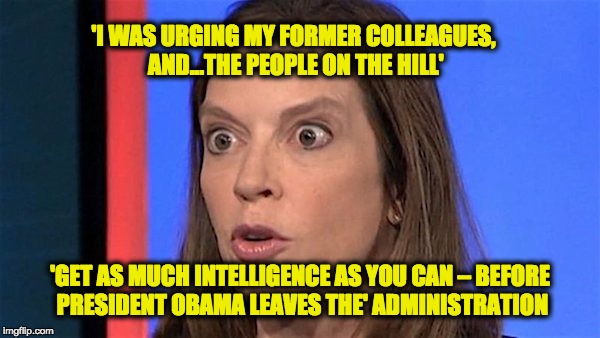 Evelyn Farkas, deputy assistant secretary of defense under Obama, spilled the beans about the Obama administration spying on Trump, spreading the info far and wide, and even leaking  it to the press. She acknowledged that there was a rush by her colleagues to gather intelligence on Trump team ties to Russia before Donald Trump took office, to spread them around as wide as possible and to conceal the sources of the intelligence from the incoming Trump administration.

Farkas worked for the Obama administration until September 2015 and became a foreign policy advisor for Democratic presidential nominee Hillary Clinton and eventually an MSNBC contributor.

While appearing on Morning Joe on  March 2nd, Farkas responded to a report in The New York Times suggesting the “Obama Administration Rushed to Preserve Intelligence of Russian Election Hacking.” Note: March 2nd was two days before President Trump tweeted about being “wiretapped”

In the Obama administration’s last days, some White House officials scrambled to spread information about Russian efforts to undermine the presidential election — and about possible contacts between associates of President-elect Donald J. Trump and Russians — across the government. Former American officials say they had two aims: to ensure that such meddling isn’t duplicated in future American or European elections, and to leave a clear trail of intelligence for government investigators.

Perhaps accidentally but Farkas admitted she was part of the effort urging the gathering of as much intelligence and to spread the information far and wide.  Note in the statement below when she speaks of people on the Hill, she probably means Democrats after all she was a Hillary staffer.

Well, I was urging my former colleagues, and,  frankly speaking, the people on the Hill, it was more actually aimed at telling the Hill people, get as much information as you can – get as much intelligence as you can – before President Obama leaves the administration. Because I had a fear that somehow that information would disappear with the senior [Obama] people who left. So it would be hidden away in the bureaucracy, um, that the Trump folks – if they found out HOW we knew what we knew about their, the Trump staff, dealing with Russians – that they would try to compromise those sources and methods — meaning we would no longer have access to that intelligence. So I became very worried because not enough was coming out into the open and I knew that there was more. We have very good intelligence on Russia. So then I had talked to some of my former colleagues and I knew that they were also trying to help get information to the Hill…That’s why you have the leaking.

At the end of the interview, Farkas said, ” that’s why you have the leaking. People are worried.”

Understand that at the time of her making calls, urging gathering intelligence etc. Farkas was no longer part of the Administration, just another disappointed Hillary Clinton staffer. Therefore it was illegal for her to receive the information from the Obama administration to help pass around

The video of the Farkas revelation appears below:

The other question this raises is this interview was three weeks ago, why hasn’t Farkas been called before the intelligence committee? Why hasn’t the mainstream media—so quick to report negative stories about the president, why haven’t they reported this story that seems to back his story up?