No, Gov. Cuomo, It Isn’t A European Virus (Video)

The Left Is Gearing Up For A Criticism-Of-China-Is-Racist Campaign. 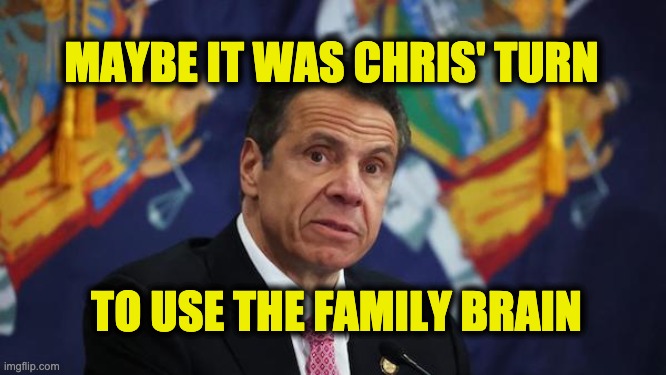 Andrew Cuomo is doing his damnedest to send us back to the theory that he and his brother only have one brain between them. Looks like Andrew’s turn to use the family brain is over. Not only must he NOT have been the keeper of the brain on the day that he signed the order to send infected patients into nursing homes, about as smart as smoking in a fireworks factory. Gov. Cuomo mustn’t have had custody of the family brain when he let this doozy fly. In his politically correct mind, the Wuhan Virus is a ‘European’ Virus. It’s no mistake. This has all the makings of a new talking point.

New York Governor Andrew Cuomo is now describing the coronavirus pandemic that originated in Wuhan, China as a "European virus."

He said this in today's presser multiple times.

Last month he lavished praise on the Chinese government for their efforts in combatting the virus. pic.twitter.com/fTSLFRVBqr

The Left is gearing up for a Criticism-of-China-is-Racist campaign. They’ve already floated a few trial balloons.

The White House press corps have been goading him about references to China and whether they might be racially tinged. Forget the fact that Trump has smoked out a few ‘reporters’ in that gallery who work for the State-owned Chinese Government who are every bit as much a propaganda outfit as the Soviet Union’s PRAVDA was, (or Obama’s CNN, for that matter).

If it’s ‘European,’ calling it the CCP Chines Coronavirus, or (as they call it in China), the Wuhan Virus is obviously racist.

Calling something ‘European’ doesn’t change the facts. Hasn’t he ever watched Seinfeld?

Let’s spell it out for him in terms his race-baiting, Chinese tyrant ass-kissing little mind can understand. Here’s a parable for the Woke crowd:

Suppose a family flees a war-torn part of the world. For argument’s sake, let’s call it Syria. They make their way to Ireland for a couple of years, but aren’t happy with the climate. So they pack up and move to Australia.

Some local bullies them and calls them mean names.

Suppose Andrew was filling out the Hate crime complaint form. What would he enter for the nationality of the victims in this story?

Are they Syrian, or are they Irish? Because by the logic in this clip, they’re Irish, and the hate complaint is just silly.

There aren’t different diseases. Covid-19, no matter what strain we are talking about, is one unified event. The world WATCHED the spread of this Virus in real-time. Johns Hopkins had a map on a website and everything. Whether you think it was the wet market or the disease lab, patient zero was from somewhere in Wuhan, China.

Be careful what games you play, Gov. Cuomo.

Because if YOU get to blame Europe for this… other American cities can point their fingers at New York.

New York City was the source of US outbreak: Yale professor says 65% of the country’s cases stemmed from the Big Apple despite first case emerging in Washington.

If we’re in the habit of renaming these viruses based on its point of origin, why not refer to the US-based cases the ‘Cuomo virus,’ after New York’s hapless governor?

You know, after the guy who signed the order that killed so many nursing home residents. Perhaps he is calling it the European Virus because he will attempt to tax all Europeans. The same way he is taxing all people who heeded his call and came to NY to help the state handle the virus.