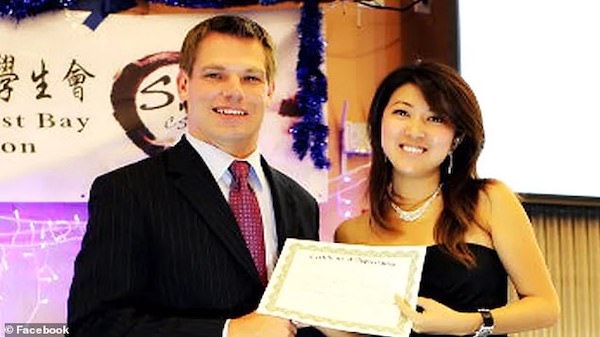 Ironically Swalwell was a huge proponent of the Russia collusion hoax–the Democratic party accusation that Trump’s 2016 campaign colluded with Russia to get Trump elected.  After a too-long and unnecessary investigation, Special Counsel Robert Mueller concluded that no one in the U.S., not Trump or anyone else, colluded with the Russians about the election.

Instead of falsely accusing the President despite the evidence, Eric Swalwell should remember that old saying, people in glass houses should stop acting stoned (or something like that).

It wasn’t the Russians who should have been in the spotlight for trying to coerce American politicians; it was their neighbors to the south.

A woman suspected of being a Chinese intelligence operative allegedly targeted several local and national politicians in the first half of the last decade, including Rep. Eric Swalwell (D-CA.), according to a report from Axios.

The woman, Fang Fang or Christine Fang, reportedly specifically attempted to curry influence with Bay Area politicians from 2011 to 2015, including participating in fundraising for Swalwell’s 2014 reelection campaign, according to the publication.

She is not believed to have obtained any classified information, but “there were some really, really sensitive people that were caught up,” a senior U.S. intelligence official told Axios. Foreign nationals are barred from donating to campaigns and Federal Election Commission records show no indication she donated to Swalwell.

According to Axios, the site that broke the story, Fang interacted with the Congressman at events, helped fundraise for his re-election campaign and even choose an intern for his office.

She targeted up-and-coming politicians and seduced them to try and gain intelligence secrets, per the report. However, there is no evidence that she seduced Swalwell with anything other than raising campaign funds. She operated primarily in the California Bay Area and targeted Swalwell because, at the time, he was one of the youngest members of congress.

The FBI is said to have recordings of  Christine Fang having sex with two different mayors in the midwest.

As soon as the word got out that she might be under investigation, the Chinese Agent left the country.

Along with Swalwell, “Fang helped with a fundraiser for Rep. Tulsi Gabbard (D-Hawaii) in 2013, according to a flyer from the event Fang shared on Facebook. She appeared in photos over multiple years with a host of California politicians, including Khanna, Swalwell, Rep. Judy Chu (D-Calif.), and then-Rep. Mike Honda (D-Calif.).” Notice all of the “D”s next to their names. 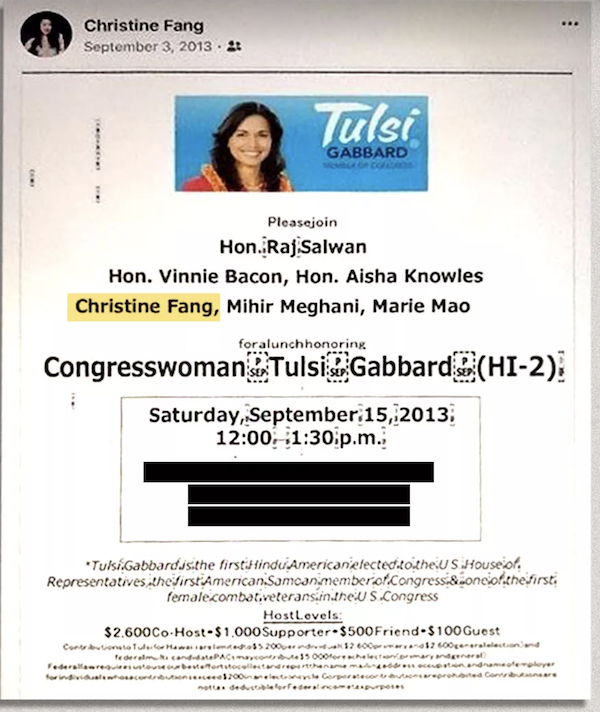 When contacted by Axios, Eric Swalwell’s team quickly drew some distance between the Congressman and Fang.

A spokesperson for Swalwell said the California congressman had already cooperated with federal investigations into Fang.

“Rep. Swalwell, long ago, provided information about this person — whom he met more than eight years ago, and whom he hasn’t seen in nearly six years — to the FBI,” Swalwell’s office said in a statement to Axios. “To protect information that might be classified, he will not participate in your story.”

Swalwell reportedly received a defensive briefing from the FBI as they accelerated their investigation into Fang. He reportedly immediately cut ties to her and is not accused of any wrongdoing in connection with her alleged activities, a current U.S. intelligence official told Axios.

At the time, he was lying about President Trump and Russia. Eric Swalwell KNEW he had interacted with a Chinese agent and allowed her to place an intern in his office.  According to the FBI, he didn’t do anything wrong–but neither did Donald J. Trump. What he went through should have given Swalwell pause before making a false accusation of others. But it didn’t.  This proves that Eric Swalwell is not only an immoral person, but he is a narcissistic, lying politician who puts his needs and the needs of his party in front of the truth and the needs of his district and his country.