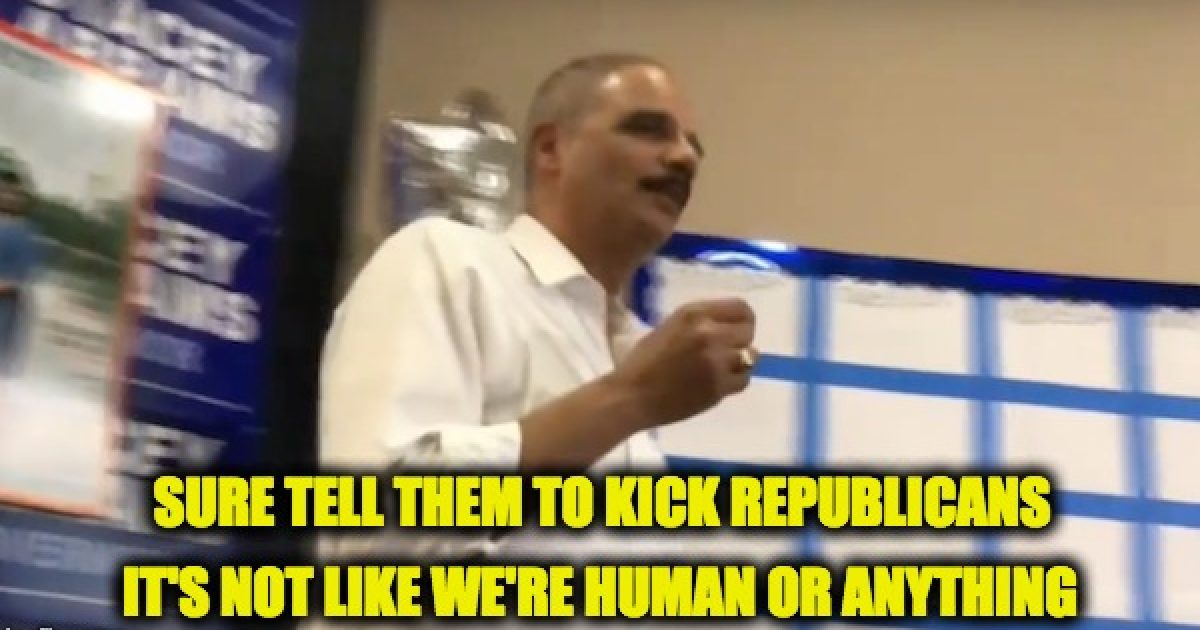 What the heck is it with these liberals?  The political discourse from Democrats is becoming more and more violent every day thanks to people like Maxine Waters, and this imbecile, Eric Holder who ran the most corruptly political Department Of Justice in American history is trying to incite more violence.

While campaigning in Georgia on Sunday, former Attorney General Eric Holder, told an audience that he disagreed with former first lady Michelle Obama’s much touted mantra, “When they go low, we go high.”
“It is time for us as Democrats to be as tough as they are, to be as dedicated as they are, to be as committed as they are,” Holder said. “Michelle always says, Michelle Obama, I love her. She and my wife are really tight. Which always scares me and Barack. Michelle always says, ‘When they go low, we go high.’ No. No. When they go low, we kick them. That’s what this new Democratic Party is about. We are proud as hell to be Democrats. We are willing to fight for the ideals of the Democratic Party. We are proud of our history, we are proud of our present and we are proud of the future that we can create for this country (video embedded below).
Later on, the former the former chief law enforcement officer of this country, who used his office to score political points said,  ‘When I say we kick them, I don’t mean we do anything inappropriate, we don’t do anything illegal, but we have to be tough and we have to fight.”
But it was too late Eric Holder joined the ranks of Democratic Party leaders trying to incite violence.

Cory Booker pleads for activists to “get up in the face of some congresspeople.”

Hillary Clinton says “you cannot be civil with” Republicans.

But holder would be wise to consider the worlds of Senator Rand Paul, himself a recent victim of violence, who said in an interview with Kentucky radio station WHAS on Tuesday:

“I really worry that someone is going to be killed and that those who are ratcheting up the conversation … they have to realize that they bear some responsibility if this elevates to violence,”

Sorry Rand, while I agree with you, I am not sure Eric Holder has a conscience. The video of Holder follows.