Polls Report Americans’ Have Message For Congress-ENOUGH WITH RUSSIA!! 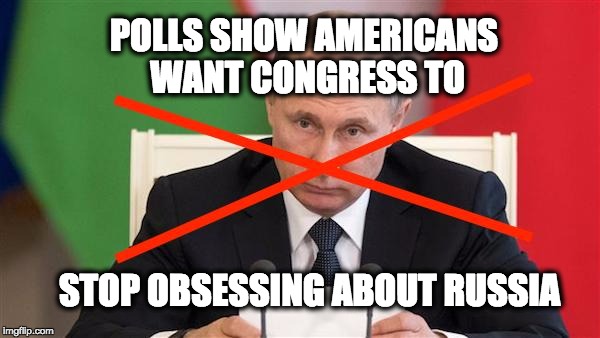 Congressional Democrats have been concocting some of the wildest conspiracy theories this side of Dealey Plaza in the first few months of the Trump presidency, and Americans are tired of it.

Originating during the tumultuous and arduous election of 2016 while Hillary Clinton was hard up for a way to attack then-candidate Donald Trump, the former First Lady conjured an all-too perfect super villain to pin her opponent to:  The evil Russians and their creepy President, Vladimir Putin.

Clinton was relentless, constantly calling into question Trump’s natural hope to have a normalized relationship with Russia, who, after all, is a super power on the world stage and the planet’s largest country.  It was darn near presidential of Trump to show such restraint and diplomatic concern regarding our nation’s relationship with the only other sovereign entity on the planet that could wipe us off the map with the push of a button.  Clinton, however, was so infatuated and obsessed with taking the White House that she failed to realize just how absurd her continued claims of collusion were.

Now, 6 months into Trump’s first term, we are still being bombarded with this kooky Kremlin fiction via an FBI investigation and Special Counsel Robert Mueller.  Surely, that’s because Americans overwhelmingly demand that we get to the bottom of this, right?

“A majority of American voters think Congress’s investigations into Russia hurt the country and want to see lawmakers move on to other issues, the latest Harvard-Harris Poll survey shows.

“According to the poll, 64 percent say the Russia probes are damaging to the nation and 56 percent want Congress and the media to focus on other issues like terrorism, healthcare, the economy, national security and jobs.

“According to The Hill, 75 percent supported former FBI director Robert Mueller’s investigation in a Harvard-Harris survey released last month. Five concurrent congressional investigations on Russia are happening as Mueller does his own probe.”

Once again, the government knows whats best for us, it seems.

We are currently facing an ever-increasing call to arms by radical leftists who are now, quite literally, firing upon conservatives to instigate their New Civil War.  That is an issue that is absolutely worthy of governmental investigation, and I’m sure that you can find that more than 56% of Americans are willing to see this resolved.