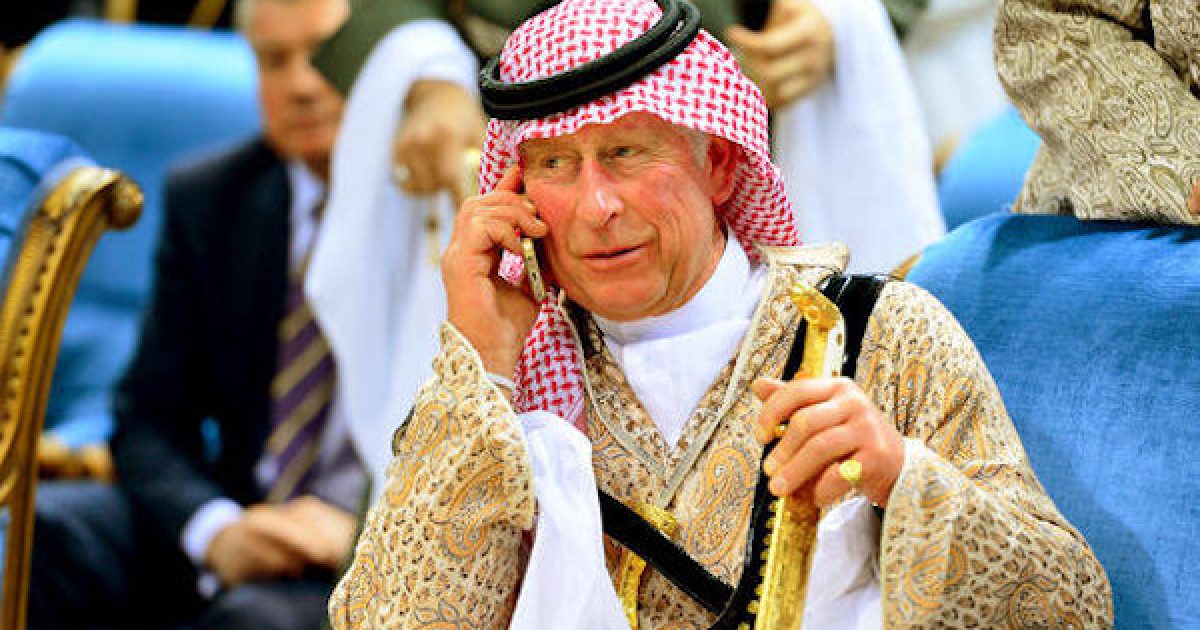 The Daily Mail, a newspaper in Great Britain published a 1986 letter from Prince Charles to an American friend where he urged the US to ‘take on the Jewish lobby’ – and blamed ‘the influx of foreign Jews’ for causing unrest in the Middle East.  More shocking than the letter itself was the surprise of the British public and Israel supporters across the world as Charles has never shown an affinity for the Jewish state.

Written to Laurens van der Post, the Prince wrote the letter on the way home from an official trip to Saudi Arabia, Bahrain, and Qatar with his then-wife Princess Diana. The letter was not “leaked,” but it was found in a public archive and says in part:

Tried to read bit of Koran on way out and it gave me some insight into way they [Arabs] think and operate. Don’t think they could understand us through reading Bible though!”

Also I now begin to understand better their [Arabs’] point of view about Israel. Never realized they see it as a US colony.

I now appreciate that Arabs and Jews were all a Semitic people originally and it is the influx of foreign, European Jews (especially from Poland, they say) which has helped to cause great problems. I know there are so many complex issues, but how can there ever be an end to terrorism unless the causes are eliminated?

Surely some US president has to have the courage to stand up and take on the Jewish lobby in US? I must be naive, I suppose!

The Jewish lobby is a term which promotes the classic anti-Semitic canard that the Jews control the U.S. Government While there are groups that lobby for Israel such as AIPAC they are not “Jewish” in nature, rather their membership runs across religions and party-lines. Generally, the phrases “Jewish lobby” or “Israel Lobby” are used without mentioning other ‘lobbies’ or mentioning that Judaism is a grassroots faith, thus Jews do not have a homogeneous position on anything. 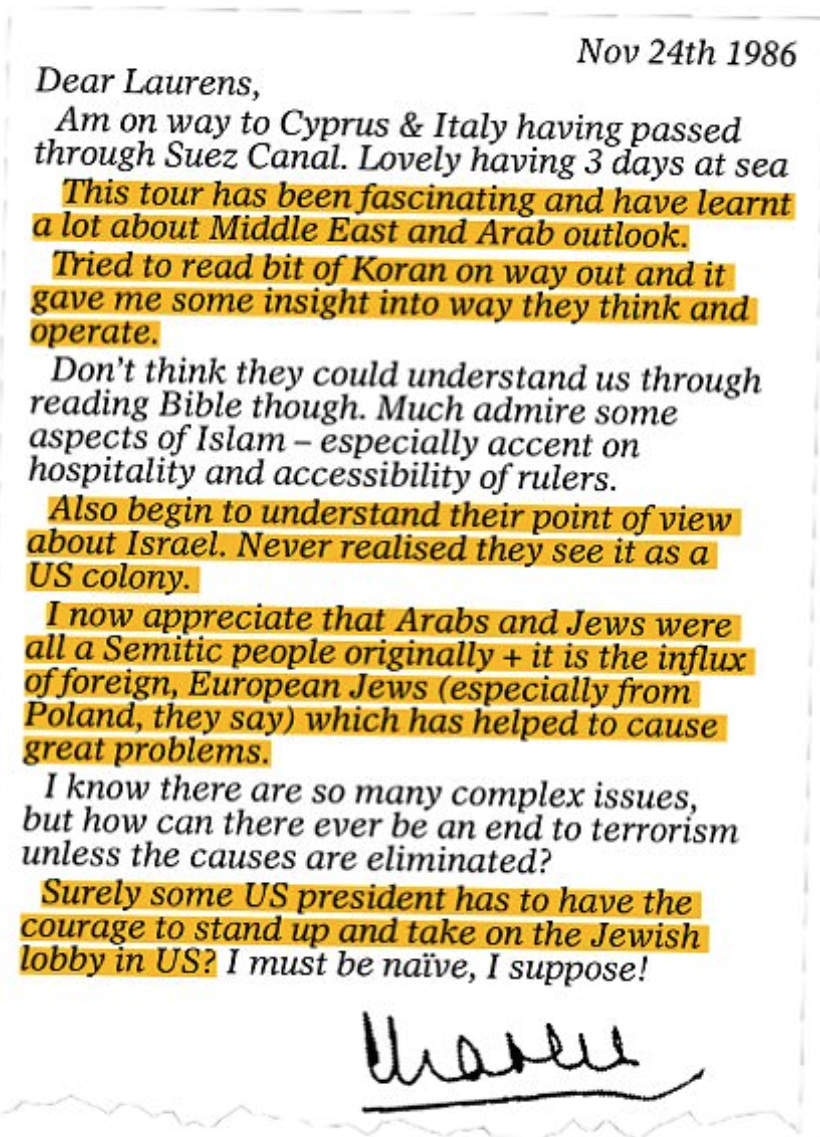 The truth is even the “pro-Israel lobby” does not wield any more influence than others.  For example, they were not able to stop the U.S. from dealing with the PLO. President Carter was calling for a Palestinian State in 1976 (nine years after the Six Day War). Now compare that to the “Cuban lobby” which was able to prevent the U.S. from dealing with Castro-run Cuba for 56 years.

A spokeswoman for Prince Charles said the letter did not contain his views but he was simply relaying arguments he heard on his trip.

“He was sharing the arguments in private correspondence with a long-standing friend in an attempt to improve his understanding of what he has always recognized is a deeply complex issue to which he was coming early on in his own analysis in 1986.”

However, when one rereads his final words about the Jewish Lobby it is clear that he was reflecting his own views: “Surely some US president has to have the courage to stand up and take on the Jewish lobby in US? I must be naive, I suppose!”

The spokesman added that Charles “proven track record” of support for both Jewish and Arab communities. Indeed, the Daily Mail story has a “some of his best friends are Jewish” section.

While the letter is inflammatory, there is no suggestion Charles holds anti-Semitic views.

He has many prominent Jewish friends and in 2013 became the first Royal to attend a chief rabbi’s inauguration ceremony. In a speech that year, he expressed concern at the apparent rise of anti-Semitism in Britain.

Sure, and he even has a Kippah embedded with his royal crest so he can’t be anti-Semitic. 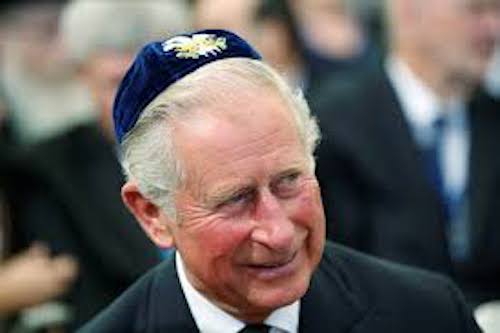 It was reported the Prince had not been to the US for the previous six years on Foreign Office advice, largely because of his criticism of US policy in the Middle East.

A diplomatic source said at the time the Prince had ‘in American terms and international terms, fairly dodgy views on Israel. He thinks American policy in the Middle East is complete madness.

In 2007 The Jewish Chronicle in Britain got a hold of an email exchange showing that Israel was trying to set up a visit from Charlie’s closest aides as a first step in getting the Prince make an official visit to the Holy Land. Charles, who is as popular in Saudi Arabia as Jerry Lewis is in France, rebuffed his aid’s desire to make a trip because there was no way he was going to Israel.

And it’s not just Charles.  Since its founding in 1948 member of the British royal family has yet visited Israel in an official capacity. Prince Philip was there in 1994 to attend a Yad Vashem ceremony to honor his late mother, and Prince Charles attended the funeral of Prime Minister Yitzhak Rabin (wearing his neat Kippah) in 2016 and the Yitzhak Rabin funeral in 1995 both were considered private visits. There has never been an official State visit from a British Royal.  In the twenty-one years between the two funerals the Prince had visited Arab countries repeatedly, but Israel has remained on some sort of blacklist. No official visit.

In 2010 another British paper, The Telegraph revealed the heir to the British throne, joined Prime Minister Gordon Brown by lending his voice to a charity which raises money for Hamas.

A charity praised last week by Gordon Brown and the Prince of Wales has channeled hundreds of thousands of pounds to groups linked to Hamas, the banned terrorist organization, according to security sources. The Prime Minister and the heir to the throne personally praised Muslim Aid, whose own accounts show it has paid at least £325,000 to the Islamic University of Gaza, where leading Hamas figures teach, and £13,998 to the al-Ihsan Charitable Society, designated by the US government as a “sponsor of terrorism” and a front for the Palestinian Islamic Jihad terrorist group.  Security sources also claim that Muslim Aid has helped channel a further £210,600 to six other organizations in the Gaza Strip since July 2009, all of which they say are linked to Hamas.”

Per Elliott Abrams who was the number two person at the US National Security Council under President Bush #43,  the royal family’s refusal to make a state visit to Israel is a reflection of bias against the Jewish state. Writing for the Council on Foreign Relations in 2014. Abrams wrote, “The continuing failure or refusal of any royal to make an official or state visit to Israel is an anomaly that suggests bias, and undermines potential British influence in the region.”

In the end, I feel bad for Britain’s Prince Charles after all the guy’s main purpose in life is to wait for his mum to die so he can take over her job. Charlie has spent his life looking for his “special purpose.” He has been searching for a reason to exist all of his life, sometimes publicly. Remember the revelation in 1993 that he was so lost, looking so hard for a purpose in life that he offered to work as his girlfriend (now wife) Camilla’s trousers, or even her tampon. If that doesn’t show a lost soul looking for a purpose, what does?  Perhaps he’s settled on disparaging Jews and the Jewish State as his“special purpose.”