ENERGY STAR Repeal To Cause Global Depression For Progressive Media 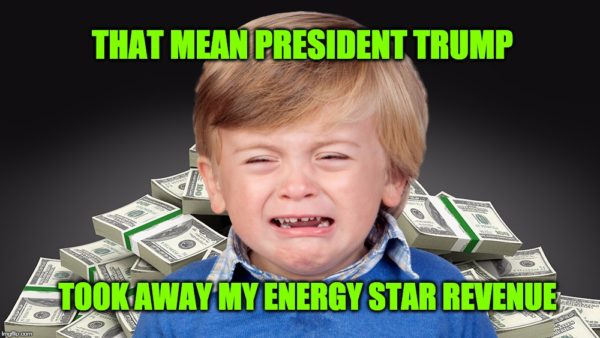 President Trump recently announced the ‘close out‘ of the ENERGY STAR program, and has officially begun the deconstruction of one of the most corrupt federal programs in US history. This effectively ends the decades old mandate requiring that all government agencies purchase only the EPA’s brand of ‘certified’ energy efficiency products and services, opening our government contracting to honest competition for the first time in decades.

This is great news for most Americans, not so much for mainstream media outlets that helped market the EPA’s unique commodity for many years. EPA claims their brand has saved over $430 billion in utility bills since 1992, but can’t explain how the extraordinary energy saving occur or why electric bills would skyrocket from the use of ENERGY STAR products.

Mainstream media can’t report on the repeal of ENERGY STAR program which was the centerpiece of the Clean Energy Economy, because no one wants to talk about the evidence supporting those multi-billion dollar claims of the EPA anymore.

Now the media Resistance movement is anxious to end all dialog on the old Obama energy plan, and begin promoting China’s new action plan “One Belt, One Road” initiative as the path to prosperity. Imagine the enormous challenge for bureaucrats trying to market this ‘socialist market economy’ program on behalf of the Global elites without the lucrative benefits of the ENERGY STAR brand to prop up your sales pitch.

Don’t be fooled by the current hysteria gripping the media, its only the first signs of severe depression about to set in as media foundations contemplate a future without any influence over the working class, a group they openly revile as deplorable. No amount of money will ever buy back the respect and trust of the American people for the corrupt media and their equally crooked Progressive business partners.

American businesses should stop listening to media moon-bats, and start focusing on locating and competing for government contracts in every sub-division of government from the dog catcher to the largest GSA owned buildings in your area. The US government is the largest procurement agency in the world, and no longer under the monopoly control of EPA partnerships backing a European Socialist model of governance for America.

The Russians are coming!

This fantasy concocted by the #NeverTrump media sounds almost plausible, until one considers the sources of all these bizarre claims. Most come directly from US intelligence agencies utilizing advanced spy-tools against American citizens with absolutely no involvement in espionage or terrorist activity at all.

Many of our most sophisticated surveillance tools were either stolen or handed-over to criminal organizations, yet our mainstream media would have us believe that only Russians had motivation to use them to influence our elections. It appears our media has completely forgotten all the shadowy connections between China and our elected officials dating back to Bill Clinton’s Presidential campaign in 1992.

That same year President G.H.W. Bush, the former head of the CIA created the ENERGY STAR program and signed onto the UN Agenda 21 Development Plan, introducing the world to new media terms like Fake News and Conspiracy Theory to describe all critics.

Did the media suddenly forget how China became a super power manufacturing ENERGY STAR brand products for the EPA, which are now mandated for use by government in Canada, Japan, New Zealand, Taiwan, Australia, Switzerland and the European Community but not in the USA anymore. Thank you President Trump!

The EPA claims their ENERGY STAR brand saves 25-50% more electrical energy than identical products, but can provide no proof to support their claims. There is no National Standards for the measurement or verification of electrical energy savings in technologies, government bureaucrats are solely responsible for making those energy-saving claims and our intelligence community apparently provided the only verification on the performance of the EPA’s unique product.

Leading to the question, how was it possible that FBI, NSA and CIA operatives all failed to read the 2014 Senate Report “The Chain of Environmental Command: How a Club of Billionaires and Their Foundations Control the Environmental Movement and Obama’s EPA” and not find any legal issues involving conflicts of interest, self-dealing or fraud under color of authority?

Its even harder to believe that our CIA spy-master would assume WikiLeaks is a Russian front, when virtually all of Julian Assange’s statements are favorable to UN civil societies, environmental NGO’s and radical non-profits associated with George Soros cronies.

Whereas the CIA ‘Vault 7′ Marble program allegedly allows for undetected electronic surveillance and provides the ability to leave signs indicating other foreign operative may have conducted the hacking. Shouldn’t someone inform members of Congress, or the new Special Prosecutor Robert Mueller about the capabilities of these CIA spy-tools?

Americans should disregard the media suffering from Trump Derangement Syndrome and start to research the millions of jobs and contracting opportunities coming available under President Trump’s Buy American-Hire American agenda. Congress will need time to write and pass new laws to replace decades worth of regulations, and the average citizen has no control over that portion of the process.

Relax! Understand that Progressives have no interest in competing for real jobs, have no skill-sets to create new businesses and they certainly don’t have any products or services of value to sell to our government that could ever compete against those provided by American small business. Now that’s what I call depressing!