Angry Protester Asks Elizabeth Warren ‘Why Are You Siding With Terrorists?’ 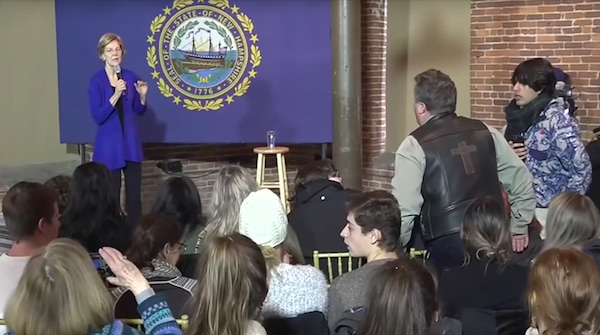 Why are Democrats siding with terrorists instead of supporting America? Elizabeth Warren terrorists

Democrats are so desperate to take Trump down, that they will automatically disagree with anything he says or does even if it means siding with terror states.

It’s called partisan politics and it is not to be confused with “America First.”

Here’s the story from 100 Percent Fed Up:

Elizabeth Warren got an earful in New Hampshire this week.

During a campaign event in New Hampshire, she was confronted by a man who was obviously angry about the position she has taken on Iran following the killing of Soleimani.

An irate protester interrupted the start of Democratic presidential candidate Elizabeth Warren’s campaign event here Friday, angrily accusing the Massachusetts senator of “siding with terrorists” amid the conflict between the United States and Iran.

As soon as Warren took to the mic at the town hall-style event, the man charged to the front of the room and began yelling.

“You’re siding with Iran,” the protester said to Warren, before being ushered out. “Why are you siding with terrorists?”

He also told her: “Hope you resign.”

Warren responded as the crowd booed at the protester: “This is a man who’s deeply upset. It’s all right. It’s time for you to leave.”

Here’s the full transcript of what was said:

.@ewarren was interrupted by a protester at the beginning of her town hall in Dover, New Hampshire.

Here’s what the protester said and what she responded ?

Who is on the side of those who lost their lives as Iran shot down the Ukraine bound passenger plane?

Who is on the side of the AMERICAN hostages that were held for 444 days starting in 1979?

Not Democrats in either case.

The Democrat strategy is simple.

Whatever position Trump takes, they choose the opposite.

Americans are sick of this political game.

How about we support our President and troops in this time of unrest?

If you are going to claim to be American, you need to act American.

Americans unite in these times.

They don’t cause more problems.

Whose side are these people on anyways?

Unfortunately, Trump’s enemies are their friends, even if that ally is Iran.