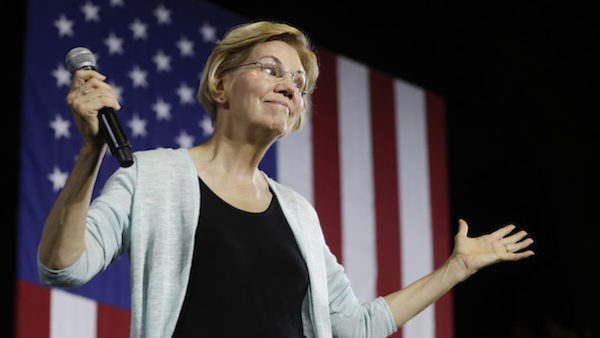 Presidential hopeful Elizabeth Warren has been caught bending her past again. This time she’s being called out by her own brother. And they both seem to be snobbish about what constitutes making an honest living.  elitist snob Elizabeth Warren

Warren has reportedly been fibbing about her father’s line of work on the campaign trail.

In a 2018 debate, responding specifically to a question about fabricating Native American heritage, Warren said, “I am the daughter of someone who ended up as a janitor, and I got to be a professor and a United States senator.”

This past March, on the campaign trail in Long Island City, she told supporters, “My father was a janitor, but his daughter got a chance to be a teacher, a college professor, a Senator and a candidate for President of the United States.”  BUT his daughter? He had an honest job and worked his ass off to raise a family and provide them with a home. What the hell is wrong with that?

Well, according to her brother, there’s one thing wrong with that.

According to new reports, Elizabeth Warren's brother is "furious" she is on the campaign trail claiming their father was a janitor

What WON'T Elizabeth Warren lie about to get power?

According to recent reports, Warren’s brother has been “furious” about her using the ‘janitor’ story.

“Families can also disagree on the details of a shared life,” the Boston Globe reported. “According to a family friend, David has disagreed with the way Warren calls herself the daughter of a janitor as she describes the work he found after losing a job as a salesman after his heart attack.”

More from the Globe:

“When she called her dad a janitor during the early stages of this, David was furious,” said Pamela Winblood, 78, a longtime friend of David who had fallen out with him and supports Warren’s presidential bid. “He said, ‘My Dad was never a janitor.’ I said, ‘Well, he was a maintenance man.’”

As noted above, she made one of the janitor claims in response to lying about her Native American heritage. Is there anything she won’t fabricate when trying to convince the American people about her past.? And why does she believe that there is something spectacular about a janitor working his arse off to provide for his family and sending his kids to college?

That ad that ended with “She’s one of us!” is wrong.  She is too much of an elitist snob to believe in what “one of us” can do to raise a family. And I get the fact that her brother wants to correct the record, but what the hell is that wrong about being a janitor?

Elizabeth Warren: My dad was a janitor.

Elizabeth Warren’s brother: ‘My Dad was never a janitor.’

Is anything about Elizabeth Warren’s bio true?

Warren’s never-ending battle with the truth about her past has been well documented, especially as it relates to her famous claim of Native American ancestry. A claim she used to propel her career as a minority.

Politico reported in 2012 that Warren “listed herself as a minority law teacher for nearly a decade from 1986 to 1995.”

She did nothing to correct the claims.

These comments come from a speech at Morgan State University, a historically black school in Baltimore. pic.twitter.com/FUdb0DMzj2

Warren stated she had no knowledge that Harvard was pushing her minority status. Still, for a decade prior, Warren self-identified as a minority professor and only stopped and went back to listing herself as white once she made it to Harvard Law.

She would eventually be forced to admit she’s not a “person of color” after a disastrous DNA test stunt showed she was 1/1204th Native American.

Who knows – Perhaps we should consider every word out of her mouth 1/1204th the truth.