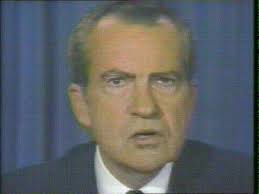 It seems as if Ehud Olmert has a new idol…Richard Nixon. Oh I am not talking about the good Nixon the one who started detente with China and Russia. And I am certainly not talking about the one who saved Israel with an emergency air lift during the Yom Kippur war , Olmert has proved that he has no idea how to help Israel militarily. The “Nixon” I am talking about was the one that stared the American people in the eye with a sweaty face and said, ” “…people have got to know whether or not their President’s a crook. Well, I am not a crook”

And because he worked so hard to cover up a third-rate break in, a man who could have been one of the greatest presidents ever was toppled.

Olmert on the other hand will never be considered a great or even pretty good PM, in fact—he is lousy. But it does seem that he has the crook thing down pat. Apparently he is under investigation for three different incidents of using various offices to enrich himself. I guess that is another difference between Olmert and his new idol. At least Nixon was caught in a Machiavellian plot to stay in power (which he would have anyway). Olmert, on the other hand is accused of being nothing more than a common criminal.

Accordingly, there are those in Israel’s Justice Department that say as the Chief Justice Officer of Israel, the Prime Minister should either resign or at least suspend himself during the investigation. Read the Ynet Story below:

Justice source: Olmert should suspend himself if investigatedAviram Zino A senior justice official said Wednesday that “if a criminal investigation is launched against (Prime Minister Ehud) Olmert, on suspicion of wrongdoing, he should to suspend himself from his post.” Pursuant to a report of an imminent police indictment against the prime minister, more than one justice source expressed this opinion, often disagreeing on the legal obligation of such a suspension, but agreeing on the public obligation. Tuesday, Israel’s Channel 10 reported that that Attorney General Menachem Mazuz plans to instruct Israel Police to launch an investigation against Prime Minister Ehud Olmert over three affairs he is allegedly connected to. The investigation is expected to begin upon the prime minister’s return from his trip to China.

By the way Ehud don’t forget to bring me home some good Won Ton (If you can’t Kosher Chinese in China… then I will wait till you get back and you can send me some dumplings from Paragon in Tiberias).

The justice source told Ynet that, both from a public and legal perspective, Olmert has no choice but to suspend himself from duty. This is in accordance with the philosophy that the head of a government authority related to law enforcement, such as Justice Minister or Internal Security Minister, cannot serve while being investigated. As such, “(Chaim) Ramon and (Avigdor) Lieberman’s situation applies to the prime minister also. He stands at the top of the executive and administrative pyramids.” It should be recalled that Lieberman was unable to serve as Internal Security Minister because of the investigation against him. Likewise, Ramon suspended himself from the position of Justice Minister upon his indictment. The PM’s obligation to the public also serves as a deciding factor, the source said: “Leaders need to constitute a personal example and a symbol.” As such, Olmert needs to temporarily suspend himself, similarly to Moshe Katsav and even the much lesser charges against former prime minister the late Yitzhak Rabin, whose wife’s was involved in a foreign coin scandal, the source emphasized. According to the source, “someone who has such a black cloud hanging over him, can’t led a country, since he will be busy defending his name and distracted, instead of ruling a country and its immediate needs.”

Is that what he was doing meeting his country’s immediate needs? Can we ask the residents of Sedrot if the would agree with that statement?

Another justice source told Ynet that Israel is faced with a difficult situation: Although there is a precedent for prime ministers not to suspend themselves from office, not doing so “could cause a widespread judicial crisis.” The three affairs: According to the report, the decision to open a criminal investigation was made during the investigation of alleged criminal conduct in the selling of Bank Leumi’s majority shares. Reports said that the prime minister, along with additional parties, allegedly committed criminal bribery offenses during the sale of the bank’s shares in 2005. The allegations claim that Olmert, who was Minister of Finance at the time, apparently broke the law for two of his friends – Daniel Abrams and Frank Louie – with whom he conducted, directly and indirectly, a relationship which allegedly involved bribe. State Comptroller Justice Micha Lindenstrauss investigated the case and transferred his findings to Mazuz. The second affair involves the prime minister’s alleged illegal political appointments in the Israel Small and Medium Enterprises Authority during his tenure as minister of industry, commerce, and labor. The other allegations pertain to Olmert’s association with his confidante Attorney Uri Messer, who was a partner in the prime minister’s law firm until 1988. Messer was one of the key figures in the affair involving Olmert’s purchase of a luxury apartment on Cremieux Street in Jerusalem. Messer allegedly conducted the business negotiations on Olmert’s behalf. Reports said Olmert received a USD 320,000 discount on the apartment in exchange for expediting construction permits.