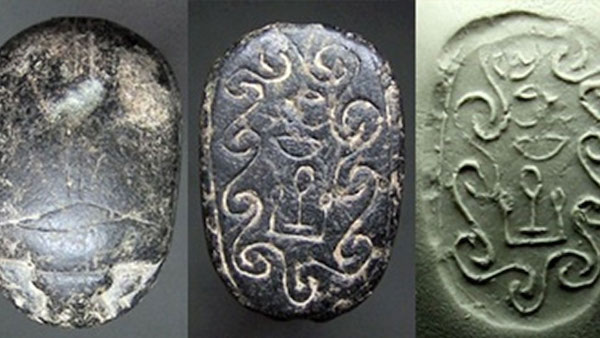 Whether you believe that the biblical account of Joseph did happen (or something close to the biblical account), or even if you don’t, this account of an Egyptian archeological find in a leading Egyptian Newspaper translated by MEMRI is very cool According to a report in the Egyptian daily Al-Ahram, by Wajih Al-Saqqar, archeologists have discovered ancient Egyptian coins bearing the name and image of the Biblical Joseph see picture above. (note: I am relying on the report because I can’t read ancient Egyptian)

“Research team head Dr. Sa’id Muhammad Thabet said that during his archeological research on the Prophet Joseph, he had discovered in the vaults of the [Egyptian] Antiquities Authority and of the National Museum many charms from various eras before and after the period of Joseph, including one that bore his effigy as the minister of the treasury in the Egyptian pharaoh’s court…

…..”Studies… Have Revealed That What Most Archeologists Took For a Kind of Charm, and Others Took For an Ornament… is Actually a Coin”

“According to Dr. Thabet, his studies are based on publications about the Third Dynasty, one of which states that the Egyptian coin of the time was called a deben and was worth one-fourth of a gram of gold. This coin is mentioned in a letter by a man named Thot-Nehet, a royal inspector of the Nile bridges. In letters to his son, he mentioned leasing lands in return for deben-coins and agricultural produce.

It makes sense. I know my Jewish father always told me to save my money, although he never told me to put my name on the cash.

…..”One Coin… [Had] an Image of a Cow Symbolizing Pharaoh’s Dream about the Seven Fat Cows and Seven Lean Cows”

“The researcher identified coins from many different periods, including coins that bore special markings identifying them as being from the era of Joseph. Among these, there was one coin that had an inscription on it, and an image of a cow symbolizing Pharaoh’s dream about the seven fat cows and seven lean cows, and the seven green stalks of grain and seven dry stalks of grain. It was found that the inscriptions of this early period were usually simple, since writing was still in its early stages, and consequently there was difficulty in deciphering the writing on these coins. But the research team [managed to] translate [the writing on the coin] by comparing it to the earliest known hieroglyphic texts…

“Joseph’s name appears twice on this coin, written in hieroglyphs: once the original name, Joseph, and once his Egyptian name, Saba Sabani, which was given to him by Pharaoh when he became treasurer. There is also an image of Joseph, who was part of the Egyptian administration at the time. [according to the bible, at that time the Jews DID control the banks-at least in Egypt]

“Dr. Sa’id Thabet called on Egypt’s Antiquities Council and on the Minister of Culture to intensify efforts in the fields of Ancient Egyptian history and archeology, and to [promote] the research of these coins that bear the name of Egyptian pharaohs and gods. This, he said, would enable the correction of prevalent misconceptions regarding the history of Ancient Egypt.”

Is this real? It is a legitimate news source,  I prefer to wait a while before passing judgment one way or another, but I hope it is.